Right Royal Company - the Archers and the Golfers

The close connections between the Royal Company of Archers and the early Leith Golfers are well known. Recent research has now shown that there were also strong connections with the golfers at Bruntsfield for over a hundred years.

The Arrows on Musselburgh, Leith and Bruntsfield 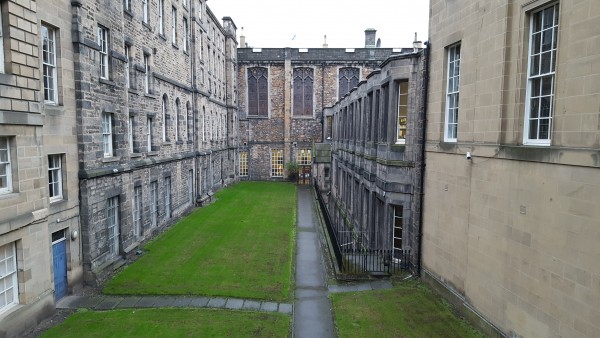 To begin with, the archers had practice butts at a pub in Lauriston Yards, believed to be where the old fire station is on Lauriston Place, near Bruntsfield. They were granted permission by the City Council for another practice ground to the west of Parliament Square, at the north of Bess's Wynd off Cowgate. Today, Bess's Wynd is the entrance to the car park of the National Library of Scotland and the area the archers used can be seen on the right of George IV Bridge to the north of the Library.

In 1726, the archers obtained a lease on land to the west of the Meadows, making them close neighbours of the golfers at Bruntsfield Links. Fifty years later, they built a clubhouse there, called Archers Hall. It was extended in the early 20th century and it has recently been modernised.

The Royal Company of Archers compete for several prizes, two of which are ancient silver arrows. The oldest of them is the Musselburgh Arrow, dating to 17th century, which is shot for on Musselburgh Links, where golf is still played. The other is the Edinburgh Arrow, which was gifted by the City of Edinburgh Council to be shot for on Leith Links in 1709. However, in 1735 the archers began shooting for this arrow on Bruntsfield Links. The Edinburgh Arrow is believed to be the inspiration for the golfers asking the City Council for a silver club as a prize for their first competition in 1744.

The archers had other reasons to know Bruntsfield Links well at the beginning of the 18th century. One of the members of the Royal Company of Archers was Robert Biggar. He was the publican in Golfhall for half a dozen years from c1723. Golfhall was the world's first golf clubhouse built in 1717.

The proof for his arrival at Golfhall is one of the more unusual pieces of historical evidence. It is his grocery order of 1723. Legal documents in 1729, presented on the death of the owner of the building, state that Robert Biggar is the recently departed tenant of the pub.

Robert Biggar won several of the archery competitions multiple times and when he moved uptown to Borthwick Close, his tavern is where the Council of the Royal Company of Archers met weekly. It is likely the archers used the golf clubhouse before this, as it would have been conveniently close to their new practice grounds in the Meadows.

Robert Biggar was one of the golfers who played in the first golf competition at Leith in 1744. Other players, who were also archers included Duncan Forbes, John Rattray and Hugh Dalrymple. In later years, a prominent member of both the Leith Golfers and the Royal Company of Archers was William St Clair, whose picture as Captain of Leith Golfers hangs in Archers Hall.

George Neilson trained at least three bowers, all of whom went on to be well known golf-club makers. They were Robert Neilson (his son), James Dickson (from Leith) and Thomas Comb. Of these, both Robert Neilson and James Dickson moved to Leith, where they had successful careers supplying the Leith golfers. Neither seems to have continued with their bow-making. Thomas Comb, by contrast,  stayed at Bruntsfield and made golf clubs at Golfhall for forty years. When George Neilson retired in 1760, Comb was appointed official bower to the Royal Company of Archers and he held the post until 1778. He seems to have derived his main income from making golf clubs, rather than bow-making.  Comb only ever called himself a 'clubmaker' and never a 'bower', though it was a prestigious position that he held for 18 years.

From 1775 until 1895, the principal golf club makers at Bruntsfield were the McEwan family whose reputation is well known in golf history. James McEwan started the business and was succeeded by his son Peter McEwan and his grandson Douglas McEwan. They had no connection to bow-making. In the middle of the 19th century they moved their main golf-club manufacturing base to Musselburgh, but they retained a workshop at 36 Wright's Houses until the end of the century. Their last manager was Frank Doleman, who took over in his own name in 1895. Frank died in 1929.

Other notable club makers during the same period at Bruntsfield were William Frier and Thomas Carruthers, the inventor of the modern hosel.

The connection between ‘bowars’ and club-makers was revived at the end of the 19th century.  William Fergie is recorded as ‘bowmaker to the Queen’s Body Guard for Scotland’ as well as ‘golf-club maker’ from 1890 to 1924. He worked in Archers Hall, the clubhouse of the Royal Company of Archers on the east of The Meadows.

This marks the end of the connections between bow-making and golf-club making, largely because golf clubs used steel shafts from 1920s onwards. However, it is not the whole story, as recent research shows that the official bow-makers and early golf-club makers at Bruntsfield are the direct successors to the Royal bow-maker and club-maker William Mayne. The means the connections between the bowers and club makers go back at least another 100 years. See The Bower Burgesses of Edinburgh.