Hoylake golf course is on the western edge of the Wirral, a promontory between the River Dee and River Mersey. The Liverpool Hunt Club had been holding race meetings there since 1849. Although the railway arrived in Hoylake in 1866, it was not until 1886 that the railway tunnel under the Mersey connected it to Liverpool directly. Until then travel there would have been a long process of horse and ferry.

The Golfing Annual of 1887-8 reports that local Scottish residents began playing ‘about 35 years ago’ on a few holes cut out near the Church on the banks of the Dee and later other residents, presumably English, began playing over the Rabbit Warren. That would take golf back half a dozen years from the Club’s formation, much the same scenario as applied at Westward Ho!, Wimbledon and of course Blackheath itself.

The initial links were 9 holes laid out by Robert Chambers of Edinburgh and George Morris (Old Tom's brother) from St Andrews.  Robert Chambers formally opened the Club on 5th June 1869 and a formal meeting on 13th October, included invited golfers from Westward Ho!, Blackheath and Manchester. George Morris was accompanied by his son, Jack Morris, who remained at Hoylake as a respected professional and  green-keeper for many years.

The course was on and around the racecourse of the Liverpool Hunt Club. Luckily for the Royal Liverpool golfers, they only had to share their course with the horses for the first seven years until 1876 when racing ceased.

To begin with, the Club used the Royal Hotel, built in 1792, as its club-house. Its proprietor was then John Ball.  This was on Stanley Road, on the far side of the course to the present clubhouse, which was built in 1895. Until then the course began and ended on the north of the links. The Royal is no longer there.

The popularity of golf and the status of the club was growing. In 1871, the club was granted the 'Royal' accolade from His Royal Highness, The Duke of Connaught.  Jack Morris extended the course first to 12 holes and then to 18 holes, operational by the Summer meeting of 1871. The following year, an 'international' match was staged between Young Tom Morris and Bob Ferguson representing Scotland and Johnny Allan and Bob Kirk (both Scottish) representing England, where they worked as professionals. The Scots from Scotland won.

In 1896 more land was leased, which enabled the expansion of the course into broadly its present layout. Hoylake has been redesigned since, by leading golf architects, and can fairly be described as Muirfield, only playable. 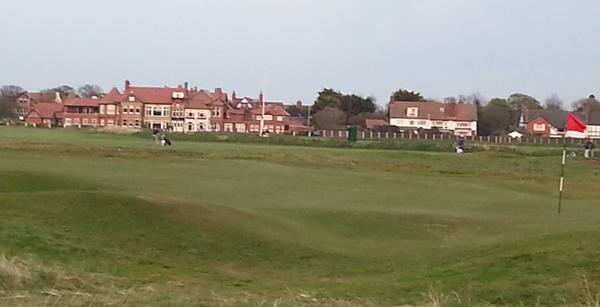 Hoylake Hole 17 Royal, played as the first in the Open

Royal Liverpool Golf Club has an unparalleled record in developing amateur golf, both in hosting the men and women's competitions, but also in fostering local champions. Notable among the early successes were John Ball Junior, the son of the proprietor of the Royal, who was the first non-Scot to win the Open in 1890 and winner of the Amateur Championship eight times between 1888 and 1912. Other local champions include Jack Graham, sadly killed in the Great War, who was leading Amateur in the Open five times and Harold Hilton, who won the Open twice, the Amateur Championship four times and the American Amateur as well.  Since then many others have followed in their footsteps.