Golf remained an exclusively Scottish affair with little English interest until the middle of 19th century, which was why there was only one golf club in London for so many years, despite a growing prosperous population. There were a references to golf being played in England such as at Richmond, Molesey Hurst, Royston and a few other places, but not to regular play or to any golf club. When the second golf club was founded in London, it also had a strong Scottish connection.

Henry Hutchinson, writing in 1897, reports that a few ‘Scots residents’ played on Wimbledon prior to the ‘Volunteer Movement in 1859’. This would have been at the same time that Rev Gosset and his friends were playing at Westward Ho! in south-west England, which probably makes these two courses effectively contemporaneous. 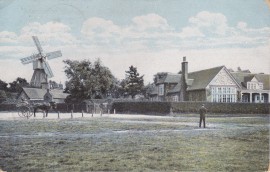 The 'Volunteer Movement' to which Hutchinson referred was the London Scottish Rifle Volunteers. They were stationed on Wimbledon Common, then owned by the Earl of Spencer.

The Regimental notes show that a meeting of Volunteers was held on 5th November 1864 after the Rifle Match on Wimbledon Common to arrange for a Golf Club to be formed. The club was officially ratified by the Commanding Officer of the Regiment in May 1866 and the first club Captain was Private A G Mackenzie and its President was Lt Col Lord Elcho, founder of the corps.  Traditionally the foundation date is taken as 1865, but it seems they are in fact a year older. Private A G Mackenzie would go on to become Laird of Avoch and the founding Captain of the Fortrose and Rosemarkie Golf Club in 1888.

The Club's first professional was Private Frank Doleman, member of a prominent family of golfers and golf club makers from Musselburgh. His elder brother William is the first recorded person to have played golf in Canada (on the Heights of Abraham in 1854) and was a well-known amateur golfer in the mid 19th century. When Frank Doleman returned to Scotland, he became manager of the McEwan & Co workshop at Bruntsfield, which he later took over in his own name from 1895 until his death in 1929.

Willie Dunn Senior, who was the professional at Blackheath at this time, laid out 18 holes round the outer area of the Common. This layout proved too expensive to maintain and the number of holes were quickly reduced to seven holes, laid out along the rifle ranges. Even today old bullets are still occasionally found.

The situation at Wimbledon was not unique. Lanark and The Curragh can both point to military golfers as their founding fathers and there were rifle ranges on early courses on Aberdeen and Kilspindie. There was also a racecourse at Wimbledon as there was at Musselburgh and Scotscraig.

The Volunteers were under the command of the Regiment, but separate from them. Initially, the club members were only military personnel and it was called the London Scottish Golf Club. From 1869, local golfing residents, with no connection to the Volunteers or the Regiment, were allowed to join.  The 'civilians'  quickly outnumbered the military golfers to become the majority of members.

Tom Dunn, son of Willie Dunn Snr, was appointed professional at Wimbledon in 1969. He was almost a native, as he had lived his childhood years at Blackheath. He expanded the course in 1871 to 18 holes. This was shortly before Wimbledon Common was to be taken into public ownership by Act of Parliament under new Conservators and the course expansion may have been to pre-empt use of the Conservators' powers to stop them. Golf was restricted to Tuesdays, Thursdays and Saturdays because of other uses of the heath. The first medal played on the new course is reported to have been on 11th March 1871.

An article in 'The Field' in 1871, authored by 'Niblik', reported the new course at Wimbledon. It claimed that an influential committee member called Grant had prevailed upon a reluctant Tom Dunn to add a 19th hole, so as to out-do St Andrews. This may be Lt Col Sir James Hope Grant who was the Honorary Colonel of the London Scottish Regiment at the time. Luckily for golf, the members of the London Scottish rescinded this request and restored the course to 18 holes. Unluckily for Grant he was known evermore as 'Nineteen Hole Grant'.

To begin with, clubhouse facilities were rudimentary and the golfers socialized at 'Mrs Doggett's Cottage' near the windmill. From 1871 the golfers used the riflemen's ‘Iron Hut’. Eventually, in 1897, a clubhouse was built, which has since been expanded. 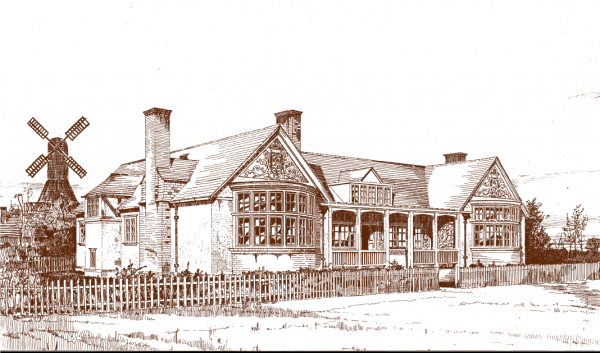 Friction between the military and civilian members led to an acrimonious schism, largely because the Club was under the direct control of the Commanding Officer of the Regiment. It was run for the benefit of the military members, despite the civilians contributing most of the funds and trophies. After failing to reach a compromise, the civilians moved to a base in the south, taking their trophies with them and initially the London Scottish name. The remaining Corps members stayed in the north, using the same club name, but with apostrophes ('London Scottish').

So from 1880, there were two clubs operating from opposite ends of the course. At first the southern club used Mrs Croft's cottage, where they built a new 'iron room', but in 1882 they got the opportunity of a long lease on Camp Cottage. They dismantled the iron room at Mrs Croft's and re-erected it at Camp Cottage, where it is now the old dining room. A few years later, the southern club acquired the title of the Royal Wimbledon Golf Club, with the continuing support from the Prince of Wales as Patron. In 1907, Royal Wimbledon finally severed their connections with the old course and laid out a new course on Warren Farm, to the south of their club-house away from the Common.

In 1908, a new residents’ golf club, called the Wimbledon Common Golf Club, was formed to play the old Wimbledon course. It participates in a joint greens' committee with London Scottish and still starts from the other side of the Common. Their first hole is the twelfth on the London Scottish course card. They have their own clubhouse on Camp Road, near Royal Wimbledon GC. 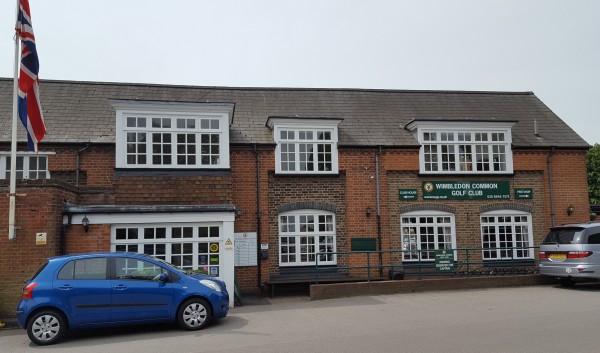 New holes were added to the course and in 1926 J H Taylor, then the professional at Royal Wimbledon, redesigned the Wimbledon Common course. The Common was commandeered by the military during the two world wars and afterwards it took time to restore to its playing best. Because it is on Common land, there are particular rules. All golfers must wear 'pillar box' red tops and golf is not permitted after 2pm on Sunday.

On current dating, it is the second oldest 18-hole golf course outside of Scotland, keeping alive the historical conditions of dress and procedure, now distant memories on all Scottish golf courses. 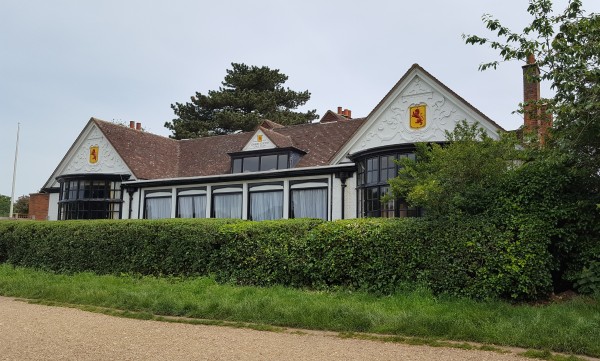 Elisabeth Beresford, author of the Wombles of Wimbledon, played golf here, and it is reported that Tomsk Womble played the course in level par in 1974. Whether he is an honorary member is not stated.