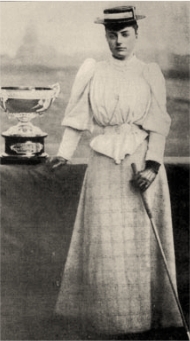 Following the formation of the LGU in 1893, they organised the first British Ladies Championship, which was won by Lady Margaret Scott in a field of 38 players. Lady Margaret averaged 42 for nine holes, winning the majority of matches comfortably and defeating Issette Pearson in the final by 7 and 5. Lady Margaret was a natural, self-taught player, who learned her golf on the family course at Stowell Park and had beaten men in tournament play. It should be noted that there was little or no involvement of Scottish lady golfers for the first four years of the competition.

In The Sportswoman’s Library of 1898, Miss Starkie-Bence wrote that Lady Margaret’s golf was a revelation those who were not aware to 'what pitch of perfection a lady-golfer might rise’.

The edge may be taken off this somewhat for modern women golfers by the knowledge that her acceptance speech was given by her father, Lord Eldon. Lady Margaret would win the Amateur Championship in the next two years as well and was credited with being able to drive 130 yards with ease,  considered an impressive distance for a woman golfer at the time.

By 1897, Lady Margaret Scott had retired from golf on her marriage and the Ladies Championship came north to Scotland for the first time. It was held at Gullane and by common agreement the standard of golf had greatly improved. There were a hundred and two entrants and ‘for the first time, the Scotch and English women-players competed for the same trophy’. There was a noteworthy difference of attitude between them. The English and the LGU denigrated and banned the use of professional (male) tutors, whereas the Scottish ladies welcomed it and were credited with the more proficient swings. 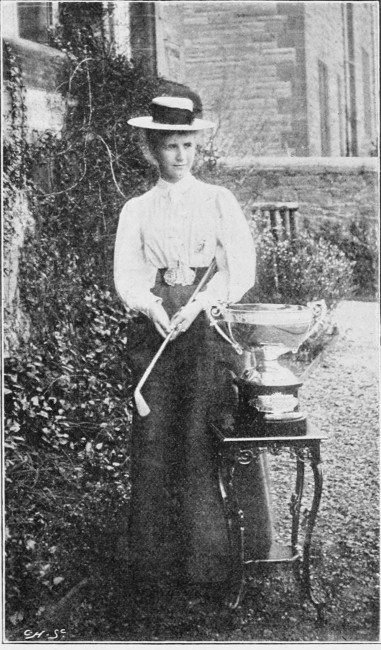 The winner was Miss Edith C Orr from North Berwick who beat her sister Miss Aimee C Orr in the final, apparently due to the accuracy of her approach shots. Miss EC Orr was a very gifted player, but she did not defend her title the following year and to this day we do not know the reason why. Current opinion theorises that there was still a significant ambivalence to women becoming famous in sporting matters and the consequential betting which was known to take place despite denials to the contrary and which many found unseemly.

There is another curious footnote to women’s long standing involvement with golf at Gullane. For many years the East Lothian Golf Club invited ladies to join them for picnics, as happened at North Berwick. The owner of much of Gullane was Mrs Hamilton Ogilvie who took a personal interest in the development of golf there, though mostly from a landlord’s perspective. Though obviously women played golf at Gullane, the Gullane Ladies Club did not form until 1904. The present clubhouse of the Gullane Golf Club was built on the site of the Ladies' old clubhouse in 1929, following acquisition of the surrounding land. Part of the agreement for this was the provision of a separate Ladies entrance.

The US Women's Championship was held in 1895 only a few years after the British. It was a stroke competition and the winner was Mrs Brown with a score of 132 for 18 holes. This should be compared to Lady Margaret Scott's score of 42 for nine in 1893. It would be several years before the American women reached the same standards.

The Women Golfers’ Museum was created in 1938. It was first housed in London but its memorabilia are now split between the British Golf Museum at St Andrews where the clubs, balls, trophies, medals and costumes are and the library at the University of St Andrews, where the books and photographs are. A list of contents of books and photographs can be found on the Museum website.