A notable independent club is the Lundin Ladies Golf Club, who manage their own course. Women began playing golf at Lundin in 1890, and the Lundin Ladies Golf Club was formally constituted in 1891. The Club has always been separate from the Lundin Golf Club, with its own clubhouse, course and staff. From the beginning, membership consisted of ladies, gentlemen and juniors over seven years old. The original course was on the Massney Braes, although there is no record of the number of holes, and it moved and changed over the next decade, before settling in 1890 on the area known then as the North Links.

In 1909, when the Leven/Lundin course was divided at the Mile Dyke, Lundin Golf Club annexed the ladies course to create their new 18-hole course. They arranged for a new ladies course, designed by James Braid, on the present site, the Standing Stanes Park. It was briefly extended to 18 holes over land acquired in 1913, but this land was immediately lost to agricultural use during the Great War and afterwards it was decided to keep the course as 9 holes. 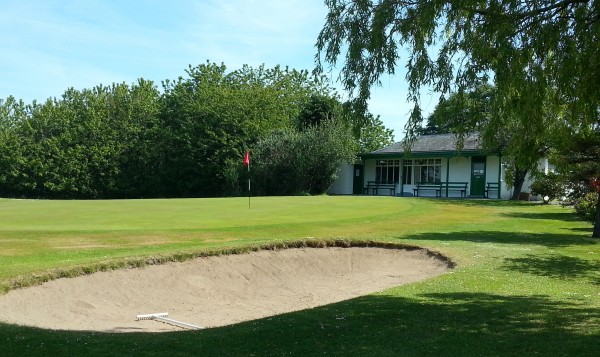 The nearby Leven Ladies Golf Club was formed in the same year as Lundin, on August 21st 1891, and the first game was played on Saturday August 22nd (at 2 pm) on a 9-hole course beside the ‘Scoonie Burn’.

Women's golf had begun in Ireland from early days. Foremost among the Irish women's clubs is Royal Portrush Ladies Golf Club founded in 1891, initially over a 9-hole course, extended to 18 holes in 1892. The Irish press were not enthusiastic supporters of women's golf, though the Coleraine Chronicle carried this report on 13th July 1888:-

On Friday evening at Portursh, almost in the gloanin' two ladies played an interesting and breathless 'single' and it was a touching and beautiful thing to see the meek devotion of the attendant husbands, who kept score and carried the clubs.

While the Ladies always seemed to succeed in getting suitable golf courses created, it was not without issues. Aberdeen Ladies Golf Club was founded in 1892 and made initial agreement to rent land at £12 per annum  from the University's Kings College. However, they were then embroiled in a contractual dispute when the University baulked at the putting the words per annum in the lease terms. The ladies refused to be browbeaten, but, in the end, after finalising a one-year agreement, they approached the (Royal) Aberdeen Golf Club at Balgownie for an alternative arrangement.

For the capital sum of £100 a course was laid out for them. The land was rent free, for as long as RAGC did not require it, but the Ladies had to arrange their own accommodation, which they did and which is why they have a separate clubhouse there to this day.  They are also possibly the first ladies club to arrange a 'home and home' match in April 1893 with Montrose Ladies Golf Club, founded in 1890.

After the formation of the Ladies Golf Association in 1893, positive attitudes to women’s golf grew rapidly. In 1894, Forfar Golf Club made a decision that they will allow women to join if 30 members of the "fair persuasion" could be persuaded to apply and in 1895, ladies were admitted.

Ladies golf was flourishing in the era of growing support for women’s voting rights. At Lanark the Ladies Golf Club was recognised in 1895, and, in the spirit of the suffragette movement of the day, declared independence in 1909 to run their own affairs.

At Westward Ho! the Ladies section was always financially independent and responsible for their part of the clubhouse and maintenance of their course. Their website reports, however, that:-

There were constant arguments about attitude and wages, sand in tee boxes, ladies damaging the course with high heels and ladies forgetting that the main verandah and most rooms in the clubhouse were for men only.

One suspects that they did not ‘forget’.

Overall, Royal North Devon Golf Club at Westward Ho! were progressive and when a local artisans club was formed and allowed to use the course, they later allowed the Northam Ladies Golf Club, the wives of the artisans, to play the course as well, provided they used the tradesman’s entrance, that is they had to enter and depart ‘over the caddies’ paths’ and not via the main entrance. This represented the common class prejudice of the day.

The first golf club which gave equal rights for women as full members is believed to be Aldeburgh, founded in 1884, though the research to confirm this with details of all the other club constitutions prior to 1890, when it happened, has still to be conducted. The reason why it happened at Aldeburgh may well have been due to the fact that the wife of the course and club organizer, Skelton Anderson, also prominent at Ascot, was the husband of Elizabeth Garrett Anderson, the first female doctor in Britain and local mayor.

It is clear, from the histories of these clubs, that golf was the significant beneficiary of women's political and economic skills over this period. However, for decades after women began playing on the links, there were regular complaints in the newspapers and elsewhere of their presence on the courses under various pretexts and there were restrictions on their play at most courses, which lasted for over a century.