This week, a new reference to the word 'golf' was uncovered in a poem dating back to c1460. This is the second oldest reference to 'golf' in the world. It had been overlooked for hundreds of years, as have connections between the poem's author and early bans on 'golf'.

Golf-staff and Buik of King Alexander

In c1460, Sir Gilbert Hay translated an old French poem into the Scottish language.  He called his work The Buik of King Alexander the Conqueror and it ran to 20,000 lines. It uses the word 'golf' twice, the second and third earliest mentions of the word in the world*. One of the references had been commented on previously, but the other had not. Though several scholars have published major works on this poem, the full story has not been told.

In two places in his poetical translation, Sir Gilbert Hay used the words 'golf staff' to describe one of the gifts which King Darius sent Alexander the Great. The legendary background to this tale is a story in itself, which students of Shakespeare will know as he used it in Henry V. Basically Darius was trying to psyche Alexander out by telling him not be a silly little boy and invade Persia. It did not work. Alexander invaded and beat him at the battle of Issus.

Therefore I am sending you a ball to play with and a 'golf staff' to hit it with, as children do round the streets.

Buik of King Alexander the Conqueror lines 4326-4328 found in both of the two extant manuscripts.

Taken from A Hermann The Taymouth Castle Manuscript  1898 Berlin.

Until now no historian has noticed that the word golf appears in two places in the poem, not just one. Historians have commented on the mention of 'golf' at line 4327, but they have all failed to notice that it was also in line 4288, just a page away. This is because the editor-copyist of the later and most easily consulted publication changed the word 'golf' to 'gold', and the earlier available manuscript was not examined.

Taken from A Hermann The Taymouth Castle Manuscript 1898 Berlin

The original text of Sir Gilbert's poem is lost and the interpretation and authorship of the work is disputed, but Sir Gilbert Hay was one of the most accomplished scholars in Europe and most authorities do not doubt that he is the author of the Buik. Sir Gilbert was one of the first graduates of St Andrews University in 1418-19 and afterwards he travelled widely in France and was appointed to high office, which included working for the French King. He was there for 24 years. Although an overview of his biography can be found online, Sir Gilbert is an important overlooked character in Scottish history.

By 1456, Sir Gilbert had returned to Scotland and for some years worked for the Chancellor of Scotland, William Sinclair, Earl of Caithness and Earl of Orkney. William Sinclair was also Baron of 'Roslin', now styled Rosslyn.  Gilbert Hay was based in Rosslyn Castle, where he translated political tracts from French into Scots and, according to some commentators, provided inspiration to William Sinclair on architectural elements for the world renown Rosslyn Chapel, which Sinclair was in the process of building.  Whether it is significant or coincidental, there is a later Rosslyn connection to golf. In the 18th century, William St Clair, 21st Baron of Roslin, was a noted golfer at Leith and St Andrews.

History of the Manuscripts

Medieval manuscripts often deteriorated and had to be written out again. There are no original copies of the Buik of King Alexander the Conqueror from 1460.  Currently the two oldest extant manuscripts date from the middle and end of the 16th century. One of them, sometimes called the Taymouth Castle manuscript, has the date of 1597 written on it and is in the National Records of Scotland (the 1597 MS). It is believed to be a close copy from the other, earlier, manuscript, which is in the British Library. Watermark and provenance indicate a date for this copy as between 1554 and 1579, but it is more likely to be earlier than later (the 1554/79 MS). Neither version is a direct copy of the 1460 poem itself. They are both incomplete copies of a later edition/copy, claimed to have been completed on 21 August 1499.   That means our two extant copies are at best third hand, which makes interpretation of any particular element dangerous as it could have been introduced or altered by subsequent editors.

This point is important because some commentators have attempted to interpret the word 'staff' as proof that the game of 'golf' was the French game of 'crosse'. The original word in the French poem may have referred to 'crosse' but Sir Gilbert, assuming he used the word 'golf-staff', could have used the word 'staff' and not club, to indicate that it is golf-like but not golf proper. In any case, apart from the question of continuity of evidence over what word Sir Gilbert used, this is a poem. The latitude and exigencies of peotic licence mean that words need to rhyme, scan and sound right. This of itself precludes any literal or dogmatic interpretation of particular words.

And he sent him a sarcastic message with some kids' toys, that is a 'golf-staff' and a ball and a whip-stick to use on a whipping top. 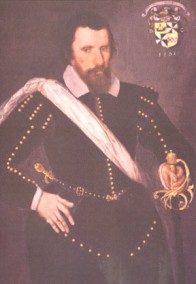 The 1554/79 MS had come into the possession of Duncan Campbell by 1579. He was 7th Lord of Glenorchy (1550-1631) and became the first Baronet, but he was more commonly known as 'Black Duncan of the Castles' because of his personality and the fact that he built or owned seven castles. He appears to be the person who commissioned the 1597 MS, but it may have been his wife Elizabeth Sinclair whom he married in 1595. The Sinclair family were of course previous employers of Sir Gilbert Hay.

As a footnote to Duncan's ownership of the manuscripts, his descendent, Sir John Campbell, 5th Baronet of Glenorchy is recorded buying two golf clubs for his children in 1672 and having one repaired at a cost of 4 shillings.

The later 1597 MS remained at Taymouth Castle until 1973 when it was gifted to the National Records of Scotland. In 1898, this copy was consulted by Albert Hermann for his widely read publication The Taymouth Castle Manuscript of Sir Gilbert Hay's Buik of King Alexander the Conqueror.  In 1986, a careful comparison of the two extant manuscripts was made and published by John Cartwright for the Scottish Text Society. He 'corrected' the 1597 MS reference in line 4288 from 'gold' to 'golf', but neither he nor anyone else commented on the duplication of the word 'golf'. The 1986 book was widely distributed and so the duplicate reference has thus lain undiscovered in every major library in Britain for thirty years.

It seems more likely than not that Sir Gilbert Hay used the word 'golf'. Two instances in the earlier manuscript suggest the word has been correctly copied through. This conclusion is supported by connections between Sir Gilbert and the edicts banning 'golf'. In 1456 he was working for the Chancellor of Scotland, and the following year James II, presumably in conference with his advisors, banned 'golf', creating the first extant mention of the word. However, there is another connection to the later 1491 edict, evidenced from the editorial end-notes in the work itself.

The editor of the 1499 edition of Sir Gilbert's poem was clearly educated and cultured. He added a page of background information and publication details in verse form. He said that the original 1460 translation was produced at the behest of Lord Erskine. This was Thomas Erskine, the 2nd Lord Erskine. He was a very important person in Scotland, but, more importantly, the Erskine family became guardians to the young James IV, who ascended the throne in 1488 at 15 years old.  They could well have been influential in the 1491 edict banning golf in Scotland. Some years later, James IV became the first named golfer in 1502. The direct link between these references to golf is significant and yet it, like the second reference to golf in the original poem, had been overlooked.

It is tempting to speculate on Sir Gilbert Hay's sporting exploits in France, or to hypothesise about Sir Gilbert and William Sinclair playing golf in Edinburgh or to imagine Lord Erskine teaching golf to the youthful James IV. These would not be the most improbable golf legends that have been created. The fact is that somebody was playing golf at this time and it could just as easily have been them as anyone else.

Overall the evidence suggests that some members of the Sinclair, Erskine or Campbell families, linked to Sir Gilbert Hay may have been golfers, if not Sir Gilbert himself.  At the least, this is further evidence that golf was in the minds of those running Scotland in the later half of the 15th century.

*It has not been possible to read the whole 20,000 lines, so there could be another golf reference to be found.