The Bower Burgesses of Edinburgh

New research for this website shows that there are direct connections between William Mayne, his Majesty's bower in 1603, and the golf-club makers of the early 20th century in Edinburgh.

For ease of understanding, known or noted club makers in this article are shown in bold.  All the other bowers mentioned are also probably golf-club makers, as they are trained by known club makers or related to them.

The known connections between the official bowers (bow-makers) to the Royal Company of Archers and golf-club makers at Bruntsfield and The Meadows from 1720 to 1924 were outlined in Right Royal Company - The Archers and the Golfers. This article traces the start of these connections back to the 16th and 17th century.

King James IV of Scotland purchased his first set of clubs from a 'bower' (bow-maker) in Perth in 1502. The name of the bower has not come down to us, but the fact that he was a bow-maker is no surprise. The skills of the bow-makers enabled them to make golf clubs with their expert knowledge of working in wood and its strengths and weaknesses. Old bows are jointed in the middle almost identically to that of the club-head and the shaft of a golf club. From the early 16th century, cannon and muskets were replacing bows. Bowers were no longer supplying the armed forces and most bowers must have been making golf clubs to provide a necessary second income.

Most histories state that the first golf-club maker whose name we know is William Mayne, but it is actually George Gibson, for the reasons outlined below. On 4th April 1603, King James VI/I appointed William Mayne to the office of fledger, bower, club maker, and spear-maker to his Majesty. This was no honorary title. New evidence has shown that William Mayne supplied golf clubs and golf balls for the personal use of the king (1).

William Mayne was made a ‘bower Burgess’ in 1588 by right of his father, George Mayne, who had been bower Burgess. George's father was John Mayne, who was also a bowar and who definitely supplied the James IV with tournament materials and clubs. This may have included golf-clubs, though we cannot be certain. William trained at least 8 apprentices before he died in 1612, two of whom came from Gullane and Dirleton in East Lothian. Not all of his trainees would have become club makers or continued in the trade. One who probably did was a John Mayne, who came from St Andrews in 1598, and another who certainly did was Donald Bayne (or Baine).

Donald Bayne went on to have a successful career in bow-making and club-making. He also trained several apprentices, including one called Patrick Dickson in 1621. He had come from Duns, but may well have been related to the Dickson family of ball makers in Leith. When Donald Bayne's second wife died in 1637, her estate inventory included 1,000 club heads and shafts under manufacture. Making golf clubs was becoming more than just a cottage industry or a side-line.

Another noted ‘bower Burgess’ and club-maker at the time in Edinburgh was George Gibson, whose estate in 1622 included 'golf clubis’ (golf clubs). He was the son of a bower called John Gibson, the Younger, who had been made a Burgess in 1564. George became a Burgess in  his own right in January 1579, nine years before William Mayne. He must have been trading at this time, so this really makes George Gibson the first-known definite golf-club maker.

George Gibson trained at least half a dozen apprentices and there are other bower burgesses called Gibson before and after him, who also took on apprentices, suggesting a successful family of bow-makers and club-makers. However, George's own son became a lawyer, in contrast to William Mayne's son who followed his father into bow-making.

William Mayne’s eldest son, called Robert Mayne, became a bower Burgess in his own right in 1630. As Robert was born in 1605, he would have been too young to have been trained by his father before he died. However, his mother, Catherine Young, married another 'bower Burgess' called William Moncrieff in 1616, so it was probably Moncrieff who trained young Robert Mayne. William Moncrieff himself had been trained in 1601 by George Whyte (White), who had been one of William Mayne's early apprentices.

Robert Mayne became a bower Burgess when he was 25 and he took on three recorded apprentices, two of whom could certainly have been club makers. The first was Alexander Hay in 1633. Alexander had come from Tain, where his father was a notary. Decades later, Alexander went on to become 'his Majesty’s bower' in his own right, following in his mentor's father's footsteps. 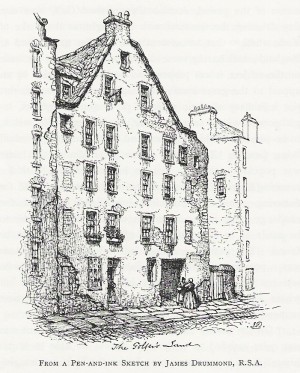 The Golfer's Land, 77 Canongate, Edinburgh, built by John Paterson and demolished by the City Council in the 1960s

Robert Mayne's other notable apprentice was Thomas Paterson, whose father, John Paterson, came from the Canongate. The location and father's name suggest an family connection to John Paterson, the famed winner of the golf match of 1681 on Leith Links with the Duke of York, who owned a house  in the Canongate, as well as building one down in Leith.

Alexander Hay became a Burgess in 1640 and, by 1673, he had been appointed to the position of 'his Majesty's bower'. As might be expected of someone who rose to such an elevated position, he had at least 6 apprentices, the second highest number of apprentice bowers recorded in the Register for this period after William Mayne.

One of Alexander's later trainees was a family namesake, James Hay, whose father was a heel maker, living in St Ninian’s Row. Notably, a contemporary heel maker in the same street was John Elder, who is recorded in Marie's Chapel lodge in 1673 as coming from Coldburn and making 'Gouff Clubs'.

An earlier apprentice that Alexander Hay trained in 1647 was Hugh Munro from Fearn in Ross-shire. Both Alexander Hay and Hugh Munro worked for several decades in Edinburgh as bow-makers and probably club-makers.

In 1677, Alexander Hay died, as had Hugh Munro a couple of years earlier. Though there still appear to have been contemporaneous bow-makers in Edinburgh, the Royal Company of Archers were not satisfied with them and they paid Robert Munro to go to London to be trained to make bows.  At least two people called Robert Munro were associated with making bows or clubs at this time in Edinburgh. The most likely candidate in this case is the son of Andrew Munro and Marion Gourlay, born in 1660, who would have been 17 years old when he went to London.

There is a record of the supply of golf clubs to George Seton, 4th Earl of Winton in 1679 by a Robert Munro, who is almost certainly the same individual. Robert Munro may well, therefore, have been a clubmaker before the Royal Company selected him to be trained as their official bower. Given his age, he was probably already a trained craftsman in golf-club making or similar, which could explain why they chose him. It also likely that there was a family connection to the Hugh Munro that Alexander Hay had trained.

In later years, Robert Munro, as offical bow-maker to the Royal Company of Archers, trained George Neilson, who is the first recorded golf-club maker at Golfhall at Bruntsfield Links. The connections from George Neilson to the 20th century club makers are outlined here in Right Royal Company -The Archers and the Golfers. That means there is now three hundred years of history when we can track the definite or likely club-makers and their connections to the bowers.

The dozen bowers mentioned in this article are only a minority of the 70 recorded bower and bower apprentices in Edinburgh in 17th century. More than half of them can be traced back to William Mayne and most of the others are related to one of other of the golf-club makers we know about. The full list of the bower burgesses of Edinburgh and their apprentices from 1564 to 1700 is given here.

The number of bow-makers had been falling from the middle of the 17th century and in Edinburgh it dropped dramatically after 1700. For many decades, bows had only been used for sport. Only three bowers are noted in the trade registers between 1700 and 1760. To this can be added the three official bowers to the Royal Company of Archers at Bruntsfield, who all made golf clubs. By 1760, all the bower golf-club makers traded as clubmakers, not as bowers.