Below is the outline of chapters 5 to 8 of Bruntsfield Links - Home of Club Golf.

Many people know about the Golf House Tavern at the west end of Bruntsfield Links. Much less widely known is the fact that there was a golf house on the east of Bruntsfield Links. It did not find favour with the golfers, and certainly not with the major societies, as its facilities were much more limited than the larger golf house on the west. Originally built as a house, it only came to prominence between 1827 and 1830, when the Burgess club moved there temporarily.

Built by James Nimmo in 1719, the Golf House East was tenanted by Mrs Campbell at the end of 18th century. William Martin, a bookseller, bought it and redeveloped it in early 19th century. During this period the world's first female golf-club maker is recorded as working nearby. She was Mrs Isobel Denholm who had married David Denholm, officer of Edinburgh Burgess Golfing Society. This significant event in women's golf history had gone unnoticed in the Edinburgh Postal Directories for almost 200 years!

The Burgess moved to the Golf House East for three years when the fell out with the landlady at the Golf House West. The landlord at the time was Andrew Gorrie, but he died in 1830 and the club swallowed their pride and moved back to the other side of the Links.

The Warrender Golf Club are probably the most important of the less well known clubs that played at Bruntsfield Links. They were based initially at the east of the Links and an outline of their story is given at the end of the chapter.

The book contains the first publication of the only picture known to depict the Golf House East.

This period, from 1814 to 1890, marks the heyday of Golfhall, now called the Golf House Tavern. The number of golf clubs in permanent residence was never more than three, but there were a dozen others who made occasional use it, and whenever any club left, there was always another to take their place.

The tenants of the Golf House Tavern over the period were Charles Stewart and his daughter, Robert Goodsman, Charles Calver, Mr and Mrs James Henderson, James Smith Connolly and Theresa Ann Crook.

From the middle of the 19th century, Bruntsfield Links became very crowded for two reasons. The first was the popularity of golf because of the introduction of the cheaper 'gutty' golf ball and the second was the increased development at Bruntsfield. Inevitably this lead to conflict and, eventually, the City Council banned links golf there and restricted it to the short-hole game, which is still played there today. The Golf House Tavern was an ancient building anyway and this triggered its demise. Its place was taken by The Golf Tavern, covered in the next chapter.

Golfhall, aka the Golf House Tavern and the Golf Hotel, was demolished c1955 and student residences at No. 28 Wright's Houses was built on the site in 1987. Recently a commemorative plaque was put up to mark the site where it stood.

The section headings in the chapter are as follows: -

The Golf Tavern, 30/31 Wright's Houses, took over the mantle of the Golf House Tavern in 1898, when it was remodelled into a pub. Prior to that it had been two private residences. From 1852, the Bruntsfield Links Golfing Society used one or other part of it as their clubhouse. It is the oldest extant golf clubhouse in the world.

The two most important club-mistresses between 1852 and 1894 were Mary Gilchrist and Jane Stewart, who between them served the club for almost 50 years. This chapter also contains a full description of the layout and holes of the Bruntsfield Links golf course and the full story of Robert Chambers Jnr, who was the first amateur match play champion in 1858.

Details of all the early owners and tenants of The Golf Tavern are covered. This is believed to be the most comprehensive history of any pub yet written to date. The owners from 1898 to 2017 have been James Muir & Son, Walter Deards, Thomas Carr,  Hector Gilchrist, William Younger & Co, Michael Shaw, Sandy Wood, Alan Mercer,  Scottish & Newcastle, Saltire Taverns, Speratus and G1 Group.

The longest serving owner was Michael Shaw who who is still remembered by many locals today, as are the Charles Crombie Rules of Golf tablemats which featured in the restaurant upstairs during his time.  Less well known is the fact that the famous motor racing team, Ecurie Ecosse,used the pub for meetings and celebrations or that John Michie used to work there. 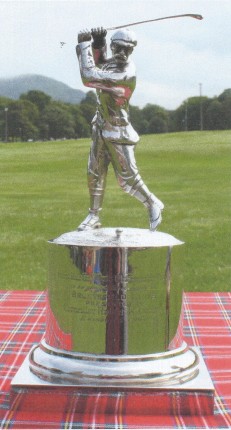 Nowadays, the principal golf club using the Tavern is the Bruntsfield Short Hole Golf Club, for whom there is a mini-history in the chapter. They own many magnificent trophies and medals acquired during over the 125 years of their existence, including the Inches Trophy, seen here, and The Tappit Hen, donated by Michael Shaw.

The Bruntsfield Short Hole are the last remaining of several short-hole clubs which used the Links, some of whose trophies they have also inherited including the Pentland Cup, know called the Bob Burnett Trophy.

The first known photograph of Golfhall, seen above, comes from their scrapbook. It is the only one showing the building face on. This is the first time it has ever appeared in print and probably the first time that most golf historians will know that it even existed!

Conclusions and Other Rambling Remarks

Highlights include the story of the battle of claims on which is the oldest golf club (which took place in the Edinburgh Almanacs in 1830-39); the connection between William Mayne (his Majesty's bower in 1603) and the invention of the modern hosel at Bruntsfield (in 1890); the little known Golf Hall that still exists in Edinburgh; the proof of why The Golf Tavern is the oldest golf clubhouse in the world; and the full details of Douglas Gourlay's divorce for cruelty and neglect, believed to be the first such divorce reported anywhere.

To give more details would be to spoil the surprise.