Bruntsfield Links - Home of Club Golf is a new book by Neil Laird published today. It tells the previously unknown story of the golf clubhouses of Bruntsfield Links, covering over 300 years of golf history. 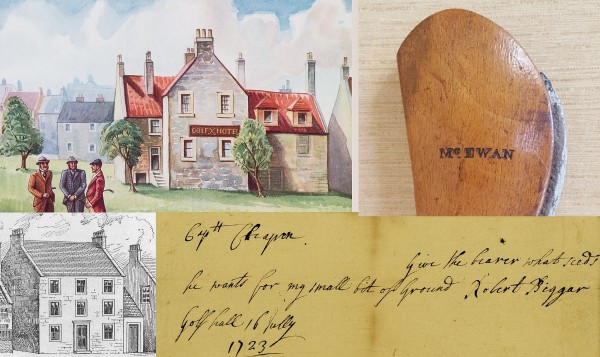 2017 marks the 300th anniversary of the building of Golfhall, the world’s first golf clubhouse and genesis of the first golfing societies. It stood for over 250 years. It was demolished in the 1950s without anyone knowing its true history.

Bruntsfield is where groups of golfers first began meeting to play golf. This book provides the proof. Three years of research has produced an astonishing amount of new information about Golfhall and events at Bruntsfield Links.

This book tells Golfhall's full story and those of the other clubhouses at Bruntsfield including Maggy's Houff, the Golf House East and the present-day Golf Tavern, inheritor of the Golfhall title and business. It sheds new light on the beginnings of the Royal Burgess and Bruntsfield Links golfing societies.

The Golfhall estate was built in 1717 by James Brownhill. It was much bigger than anyone realised. The main building was the first golf clubhouse in the world, which served as a golf clubhouse for over 150 years. In many ways, the existence of Golfhall started the golf clubs. The main building became 27-28 Wright’s Houses and was later known as the Golf House Tavern and the Golf Hotel.

Golfhall and the other clubhouses were used by many clubs including the Royal Burgess, Bruntsfield Links, Bruntsfield Allied, Edinburgh Thistle, Warrender and Bruntsfield Short Hole golf clubs. New evidence now shows that the ‘archer’ golfers and several early golf-club makers were based there from 1720.

The book contains many new details about the clubhouse history and the people who lived in it and used it. An early publican, in 1723, was Robert Biggar, a champion archer and golfer. Another important, newly-discovered tenant is George Neilson, bow-maker to the Royal Company of Arhcers and golf-club maker. In fact, all the official bow-makers for the Royal Company of Archers for 80 years made golf clubs and were based at Bruntsfield.

In 1760, Golfhall was bought by a golf-club maker, Thomas Comb, who revived the pub with David Babtie as the publican. It has long been known that Thomas Comb was based there, but not the fact the he owned the whole place for decades and developed the estate significantly. Comb was the longest serving golf-club maker at Bruntsfield. He served his apprenticeship there and worked at Golfhall from 1749 until he died there in 1797.

Thomas Comb was followed by the famous McEwan family, the greatest golf-club making dynasty of all, who started at Bruntsfield Links and remained there for fifty years, even after they had moved their main manufacturing base to Musselburgh.

An important discovery reported in the book is the divorce of Douglas Gourlay, who arrived at Bruntsfield Links in 1790, later than thought. Astonishingly, he had a previously unknown second wife, Mary Douglas, who sued him for divorce for cruelty and neglect. Not only that, but they had a daughter, Mary Gourlay, from whom he became estranged, after his second wife had left him. She died in Leith aged 23 years old.

Bruntsfield Links was the site of the first known women's golf match in 1738, which was won by 'Charming Sally', whose identity we can only guess at. It was also where the first woman golf-club maker is recorded. She was Mrs Isobel Denholm, who carried on her husband's business after his death in 1821.

The book has a complete history of the tenants who ran Golfhall from 1760 to 1890, when links golf ceased to be played at Bruntsfield. The pub and clubhouse fell into disuse in the early 20th century and the building complex was owned by a painter and decorator until 1954. Shortly afterwards, it was demolished and in 1987 the student residences at 28 Wright’s Houses were built on the site.

The Golf Tavern was built around 1831. It was used as a golf clubhouse by the Bruntsfield Links Golfing Society from 1852. It became a pub in 1898, when it was remodelled by the famous pub architect, Robert Macfarlane Cameron. It is now the oldest golf clubhouse in the world and most famous golf pub.

The full story of its beginnings, and all its owners and tenants up to the present day, are covered in the book. Many of the stories and pictures have never been in print before.

Bruntsfield Links - Home of Club Golf is printed and hand-bound in Edinburgh by the printers of the Bruntsfield Links Golf Society. It is unique in this regard and, unusually, is available in three club colours and three different bindings, seen here and in the picture above. The Bruntsfield Links green and Royal Burgess burgundy copies will be very limited, as shown below.  As these books are hand made, a small number of individual leather editions could be made to order - colour and price by negotiation.

Printing over all editions will be limited to 472 copies or initial sales.

Available at the professional shops (open to the public) at

or by contacting [email protected] for payment and purchasing details.

Click here for more details of chapters 1-4 or chapters 5-8.