One hundred and twenty golfers compete in the Rio Olympics next week. The top 15 male and 15 female golfers automatically qualified to play, subject max 4 from each country. Many commentators branded it a farce when more than half of the top men pulled out citing health grounds, especially as only one of the top women cried off even though they were more at risk. It won't be the first time that the words 'golf' and 'farce' and 'Olympics' have been associated with each other. It has happened four times before - twice when golf was an Olympic event and twice when it wasn't!

The 2016 games at Rio de Janeiro is not the first time that men's or women's golf has been played at the 'Olympics'. There are two previous scratch male gold medallists and one female gold medalist and golf was an exhibition sport on at least one other occasion and it was scheduled to be played another time when it was cancelled.

The first two modern Olympics of the 20th century were branded the 'farcical' Olympics because they were both side shows to the World Fairs. The games in Paris in 1900 were attached to the Exposition Universelle Internationale. The games themselves were called the 'Championnats Internationaux' and many winners did not realise that they had won the Olympics!

The golf competition was stoke play on the Compiègne course and the French organising committee spent time and money bringing it up to scratch, with the result that the event ran at a financial loss. There was however a very modern twist - a women's golf competition! So these games produced both male and female medalists, just as the 2016 Olympics will. 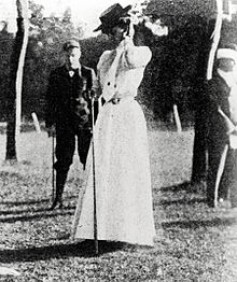 Both of the first golf gold medalists were Americans. Charles Sands of the St. Andrews Golf Club in New York won the men's competition with a score of 167 over 36 holes and Margaret Abbott of the Chicago Golf Club won the women's with 47 strokes over 9 holes.

Margaret Abbott was only there because she was studying art in Paris. Her mother was visiting her and Margaret persuaded her to compete in the international golf tournament as well. Her mother came 7th. Winners were awarded glass bowls as prizes and it is believed that Margaret never knew she had won the first ever American women's Olympic gold medal. It is also the only time a mother and daughter have represented their country in the same sport at the same Olympics.

Even more curious is the backstory of the lady who won the bronze medal. She was Daria Pratt and, shortly after her victory, she divorced her husband and married a Prince to become Princess Alexis Karageorgevitch of Serbia. 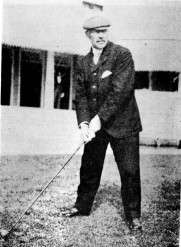 The 1904 'Olympics' were attached to the World's Fair at St Louis, celebrating the anniversary of the 'Louisiana Purchase'. There was a carnival of golf events, such as a longest drive, as a prelude to the men's golf competition. The women's competition had been replaced by a men's team competition. Instead of stroke play, it was match play. Matches were over 36 holes on the Glen Echo course, yet it only took two days to reduce the field of 77 to four semi-finalists.

In the final of the individual event, George Lyon (Canada) defeated H Chandler Egan (USA) with 3 holes up and 2 to play.

The USA won all three team medals because they were the only three teams in the competition. In fact, their third team had been pulled together on the day from golfers who happened to be present.

The full details of the winners and team members in 1904 can be found here.

Even when the Olympics began to be organised properly for London in 1908, the arrangements for golf became truly farcical. Opinion is divided as to where the responsibility for this lay. The event at Royal St George was cancelled with days to go, apparently owing to lack of support by British golfers. This was said to be because it was not supported by the R&A. Unfortunately, the cancellation came too late for George Lyon, the 1904 winner, who had already travelled from Canada to defend his title. He was offered a symbolic gold medal, but, to his great credit, he declined to take it.

A picture of the medal which George Lyon should have 'won' in 1908 can be found on the British Golf Museum website.

The pre-war Olympics in Berlin are best known for Jessie Owen's victories, particularly in the 100 metres. It is often said that Adolf Hitler stormed out in anger and refused to present the medal to him, though Owen himself said that Hitler shook hands with him afterwards and he had a picture to prove it. Less well known is the legend that Hitler had previously refused to present the golf medals when the German team did not win. 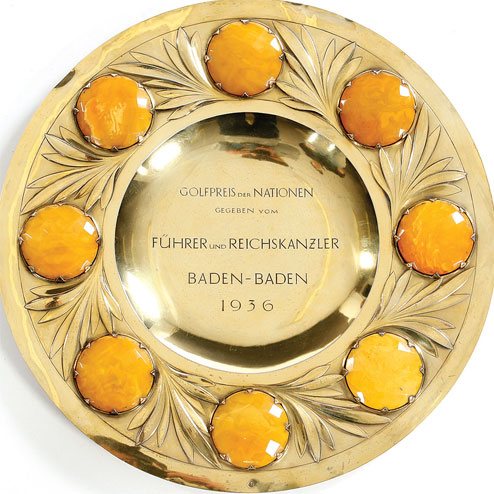 The Golfpreis Der Nationen given personally by Adolf Hitler 1936

In 1936, an exhibition golf tournament was held at Baden-Baden before the Olympics proper started. The trophy, a silver-gilt salver, was donated by Hitler personally in the expectation of a German victory and with one round to go, the home team were in the lead. Hitler set out from Berlin  to present the trophy the next day. Unfortunately, by this time the British team of Tommy Thirsk and Arnold Bentley had won with a new course record. Hitler immediately returned to Berlin, leaving the trophy to be presented by Karl Henkell, President of German Golf Union. However, modern historians have doubted some details in this story too.

The 'Golfpreis Der Nationen' is now in the possession of the Hesketh Golf Club of whom Arnold Bentley was a member.

The new Olympic golf course was built at the Reserva de Marapendi, designed by Gil Hanse.

The men's golf begins on August 11th and will be stroke play over 72 holes with no 'cut' at 36 holes.

The event is limited to 60 male and 60 women golfers. The qualification is described as:

The International Olympic Committee has restricted International Golf Federation to an Olympic field to 60 players for each of the men’s and women’s competition. The IGF will utilise the official world golf rankings to create the Olympic golf rankings as a method of determining eligibility. The top-15 world-ranked players will be eligible for the Olympics, with a limit of four players from a given country. Beyond the top-15, players will be eligible based on the world rankings, with a maximum of two eligible players from each country that does not already have two or more players among the top-15.

Many of the top 15 male golfers have withdrawn. Some sports journalists have commented that the financial incentive and prestige for the male golfers is not as great as it is for the women or for other sports. Few credit the health concerns as the real reason why most of the men are not competing. However, one (non-sport) journalist pointed out the more simple fact that all the top golfers compete with each other four times a year in major competitions, whereas many other sportsmen only compete with their greatest rivals once every four years at the Olympics. None-the-less, that is also true of the tennis players and their top players are there.

For the men, Henrik Stenson (Sweden), the 2016 Champion Golfer, and Danny Willett (UK) the 2016 Master's Champion are both there.

The full current list of competitors can be found on the International Golf Federation website for men and women.

More details of the stories of golf at the Olympics can be found at The Golf Ball Factory and The International Golf Federation.