Golf History on the Big Screen

Tommy's Honour and Loopers - The Caddie's Long Walk were recently released in cinemas and are now available to buy or on television.

You wait years for a golf history film and then two come along at once. 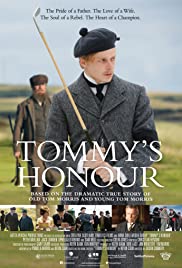 Tommy's Honour has three main themes. First is the story of Tommy's relationship with his father, Old Tom Morris, at the time when Young Tom was beginning to eclipse him in golfing terms and becoming more independent.  Secondly there is his romance with the love of his life, Meg Drinnan.  Most people are aware that this ended in the tragic premature deaths of both of them. Thirdly is his rebel attitude to the class division between the working professionals and the gentlemen players, who controlled the game, and the contrasting attitudes that Young Tom and Old Tom had towards this.

Tommy's rise to the golfing heights seems almost incidental and there is no attempt to recreate any blow-by-blow accounts of his great victories. Young Tom dominated the game in his day, winning the old Red Belt three times in a row and thereby the right to keep it. When a new trophy, the Claret Jug, replaced it a year later, he won that too, which was a unparalleled four consecutive victories. 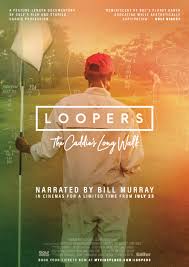 Loopers is a US sports documentary about golfing caddies and their close, but varied, relationship with the professional golfers. The film is narrated by Bill Murray and mainly comprises interviews with eminent golfers and commentators on the role that caddies have played.

The importance of the caddie is underrated and often a humorous aside in golf and this film aims to set the records straight.

It is often said that a good caddie does three things: show up, keep up and shut up. But a great caddie wears many hats. They’re the player’s psychologist, mother/father figure, technical advisor and confidante. The film unveils the working dynamic between famous partnerships.......

For some the relationship is distant, but for others it is a critical team, producing several notable victories that would probably not otherwise have happened.

The Producer of Loopers is Clark Cunningham, who has a genuine appreciation of golf history and its traditions. He travelled extensively and interviewed many of those featured. Apart from his role in film-making, he is the author of The Peerless Foursome: the Spyglass Cup, a young-adult novel about junior golf.

Tommy's Honour is 95 minutes long with a PG rating. After being shown at several cinema festivals, it had a limited theatrical release in 2017. It was recently on BBC and was available on iPlayer.  Old Tom is played by Peter Mullan and Col Boothby by Sam Neil. The two main protagonists Tommy and his wife Meg are played by Jack Lowden and Ophelia Lovibond.