Golf is the most Scottish thing about Scotland

Golf is more Scottish than Scotland, St Andrew, tartan, whisky, the Saltire, bagpipes, kilts, haggis or the Highland Games (but not Nessie).

There are many claims that golf was invented elsewhere, except that it clearly wasn't as no other country had the right combination of ball, club and land to create the game we play today. Whatever these other games were, they were not golf. By contrast, the origins of other Scottish developments go unchallenged, yet golf is more Scottish than any of them.

The word 'Scotti' was used by the Romans to describe tribes that raided the British mainland from Ireland. It was later applied (by others) to the Gaels of the Kingdom of Dal Riata based at Dunadd in Argyle, who came to eclipse the Picts in the north east. The first term for the national kingdom, used in 900 CE was 'Alba', whose reference is uncertain and which is now only used by Scottish official bodies. Eventually, the land north of the River Forth became known as Scotia and then Scotland. So the word 'Scots' isn't Scottish or Gaelic and it means 'pirates'.

The Scottish patron Saint was an apostle, born in Galilee circa 5 or 6 BCE. He never set foot in Scotland, whereas he is believed to have preached round the Black Sea, including in Romania and Ukraine, whose patron saint he also is. It is true that 'relics' that were claimed to be the Saint's body-parts were brought to Scotland hundreds of years later. They were destroyed in the Reformation, so their provenance is now academic. The Scots formally claimed St Andrew in the 1320 Declaration of Arbroath in order to boost their argument for independence with the Pope. However, St Andrew isn't Scottish and the Scots have long shared him as a patron saint with several other countries. 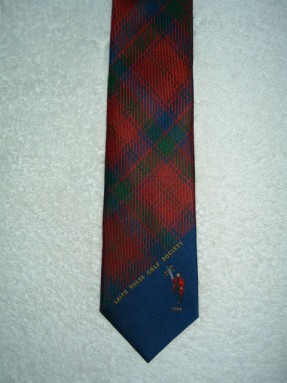 The first Scottish mention of tartan is in the royal accounts in 1471 for King James III and His Queen. This is fourteen years after the first mention of golf. The word 'tartan' appears to be French - ‘tiretaine’ - describing a woollen material of no particular pattern or colour. Designs similar to modern tartans were first seen in Ireland, though tartan like material has been found in tombs in the far east dated to 1500 years ago. There are believed to be over 5,000 tartans today, most of which post-date the 1800s. The present system of defined clan tartans only became popular under the Victorians. So tartan was adopted by the Scots, but by no means as exclusively as golf and much later than it.

The word 'whisky' is an early 18th century abbreviation of the Gaelic 'uisge beatha' (usquebeaugh) a literal translation of the Latin term 'aqua vitae' meaning 'water of life'. The earliest Scottish mention is in the Exchequer Rolls, the tax records, in 1494, when 'eight bolls of malt' were licensed to 'Friar John Cor, wherewith to make aqua vita'. Unfortunately for the Scots, an earlier mention to 'aqua vitae' has been found in The Annals of Clonmacnoise in Ireland attributed to 1405 CE, where the monks had been distilling alcohol for centuries.  Of course, champagne was created in Limoux in southern France 100 years before they started making it in the Champagne region, so there is probably no great threat to the Appellation d'Origine Protégée of Whisky.

The Saltire is the name for the Scottish flag used on this website above and it is the second oldest country flag after Denmark. The inspiration is the legendary diagonal cross on which St Andrew was crucified, which was allegedly adopted as a Scottish symbol when white clouds in the shape of the cross appeared on the morning of a battle in which the Picts and the Scots were victorious over the Angles in 832 CE. There is evidence of its use on the seal of the Guardians of Scotland in 1286 and, in later years, for the use of the white cross with other backgrounds such as green or red, suggesting some development still in progress. The first noted mention as a possible standard is in the Treasurer's Accounts for King James IV's navy in 1513. The first incontrovertible example as the flag of today is not until c1542 in Armorial of Sir David Lindsay of the Mount, which is long after the first recorded golf games and named golfers. 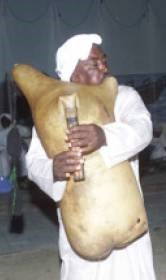 The original bagpipes, not often seen in Scotland

Bagpipes are common across the Middle East, where they probably originated, as whole calf skin versions. Though there are later reports of bagpipes in 13th and 14th century, the first British mention is the Canterbury Tales and the first clear contemporary reference to bagpipes in Scotland is at the Battle of Pinkie in 1547, when a French officer said 'the wild Scots encouraged themselves to arms by the sound of their bagpipes'. By this time, golf had been going for 100 years.

For centuries the Highland Scots wore full-length body versions of the kilt called the plaid (woollen cloak) or feileadh mòr (great plaid) in Gaelic. To put it on, you laid it out on the ground and rolled yourself into it. This is reminiscent of the Scandanvian  ‘kjalta’, a kind of toga wrapped around the body, which is probably the origin. 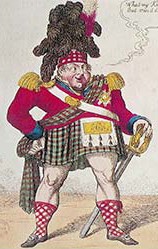 The invention of the modern kilt is credited to Thomas Rawlinson, an English iron-smelter who realised there was a need to develop a safer version of the great plaid, which would not catch fire so easily. What he created in around 1720 is known as the fèileadh beag (the small kilt). The small kilt became synonymous with Scotland when King George IV wore it on his historic visit to Edinburgh in 1822. The kilt is usually made of a tartan associated with the wearer's male line, but you have always been able to claim your clan or tartan through the female antecedents or by adoption in Scotland.

Culinary historians have been unable to find any haggis references in Scotland predating 1747, whereas they have found a dish called ‘haggas’ in an English cookery book dating from 1615 . Many believe that Robert Burns’ Address to the Haggis is what made the 'chieftain o' the pudding-race' famously Scottish. So it is really another development of the Georgian Scots. (It is self-evident that Robert Burns and Burns Night post-date golf by several centuries.)

The origin of the Highland Games is the most mysterious of all. There is talk of a race to select a royal messenger for King Malcolm Canmore III at Braemar in the 11th century, but it would be 800 years before it was held again. In the interim, legend has it that games were held to celebrate the battle of Bannockburn in 1314, but the details are scant. There was a famous Battle of the Clans at Perth on the North Inch, but this was a real battle in which people fought to the death. The Scottish Stuart Kings held 'tourneys', based on French joisting traditions, common through Europe. In 1703, there is a document summoning the Clan Grant to games, sporting Highland coats "with gun, sword, pistol and dirk". However, there is no mention of highland dancing or caber tossing or hammer throwing, so it is assumed all the competitions were fighting, which doesn't feature in the modern games.

As far as people can tell, the modern Highland Games are a Victorian invention, developing progressively after 1815, when a society of Braemar wrights began holding a procession through the town, later staging races in 1832. After Queen Victoria attended in 1838, things really took off. Today, there are more than a 100 Highland Games in Scotland and hundreds more around the Scottish diaspora.

So, 'Scots' and St Andrew are imports and all the other Scottish traditions are adoptions or creations which post date golf. Golf is more Scottish than Scotland itself!

There is, in fact, only one thing which is entirely Scottish and predates golf. That is 'Nessie', the Loch Ness Monster. There is a report in the Life of Saint Columba by Adomnán of a death of a man in 565 CE, who was killed in the River Ness by a monster, which was not heard of again until 1933.  Nuff said! 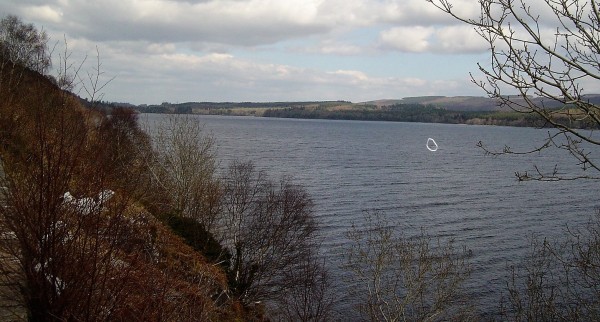