This could also be titled The Unexpected Christmas Present. Old evidence, recently re-discovered of golf on Calton Hill in Edinburgh.

Some years ago I was asked if I was aware of any evidence of golf being played on Calton Hill. At the time I knew of no such evidence.  Golf in Edinburgh was played from early days on Leith Links and Bruntsfield Links until the end of the nineteenth century. Neither course could increase to 18 holes, and what golf there was became impossible due to the increasing urbanisation round both courses.

There was an attempt by some members of the Bruntsfield Links Golfing Society to lay out a course in Holyrood Park as an alternative.  Although they had permission from the Board of Works, there was a successful legal challenge. In any case, the ground there would have been too wet and the idea was dropped.  Many Edinburgh clubs had already moved to Musselburgh and the few that remained in the City transferred to the Braid Hills course when it opened on 29 May 1889.

By 1890, there was a short-hole course laid out at Bruntsfield Links, but golf is no longer played at all at Leith, apart from the occasional historical reconstruction.

This Christmas, I  had solicited a present of Edinburgh- Mapping the City, mostly to read about the Adair map of 1682 (the first to mention Brunsfield house) for a book I am writing on the Golf Houses of Bruntsfield Links (now published). Imagine my surprise, when, in leafing through it, I found a reference to 'Golf Hill' on the south side of Calton Hill. It is south of the National Monument and to the east of the Nelson tower. As you walk up the sloping path to Calton Hill from Waterloo Place, it is on your left.

The map was published in the 1828 Town Atlas of Scotland by John Wood who surveyed many Scottish towns, but this one is an 1823 revision of an 1820 plan by Thomas Brown and available as zoomable map on NLS website.

This is not the only map reference to it. Golf Hill first appears on the Kirkwood maps of 1817 and 1821, approximately where the old telegraph station used to be.   The Kirkwoods were renown publishers, who also printed the majority of Scottish banknotes during this period.  Their maps have been shown to be highly accurate and more detailed in comparison to others. Chris Fleet of NLS has advised by e-mail that 'the reference to ‘Golf Hill’ probably derives from the Robert Kirkwood map of 1817 – the main, really detailed mapping of Edinburgh, supported by the Town Council'.

There is one contemporary print of Calton Hill, showing that it was flat on top with steep grassy embankment that was free of the shrubs and trees that grow there today. The extent of the playing area can be better seen in the picture below. (Bear in mind there were no trees or bushes on the hill at this time).

In compliance with a former promise, I will endeavour to give you some short account of the country adjacent to Edinburgh, and the state of their agriculture, though I cannot say it is deserving of your attention. The three immense hills adjoining to the City, and which are named "Arthur's Seat," "Salisbury Craig," and "Charlton (sic) Hill," are so broken, and in many parts so precipitately steep, that it is impossible to use them in tillage, and they are therefore always kept in grass, and fed upon by sheep, cows, &c. On the summit of these hills the inhabitants of Edinburgh play their favourite game of Golf; and the possessors of the ground turn it to better account by letting part of it for that purpose, than by grazing the whole of it. Around the edges of Charlton Hill they are now cutting out a walk, which, from the amazing height of the hill, and the variety of prospects, will, when it is entirely finished, be one of the most extraordinary ones in Europe. 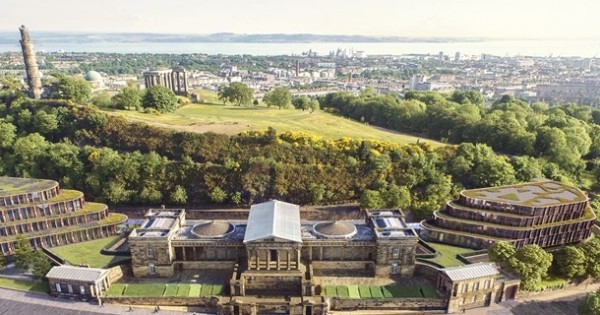 The first two of these 'impressive hills' have always been somewhat remote, and it is assumed that play there would only have been occasional, but Calton Hill is only a short walk from the New Town.  To develop the New Town, the first North Bridge was built in 1772 and later the Mound. Prior to this Calton Hill would have been through the Netherbow Gate and not easy for Edinburgh residents to access.

Recently two new 17th century golf-club makers have been discovered - John Elder and Patrick Fyfe who were based close to or on the road to Calton Hill. This suggests golf on Carlton Hill goes back earlier than previously thought, many decades before it appeared on the map.

The High School moved from its Old Town location in 1829 to Calton Hill as part of this town plan. Before 1820, the land to the south of Calton Hill was open ground. Golf Hill does not appear to be mentioned on any later map after 1828, indicating it's use for golf died out shortly after, possibly as a result of the proximity of the school and consequent dangers to the boys. 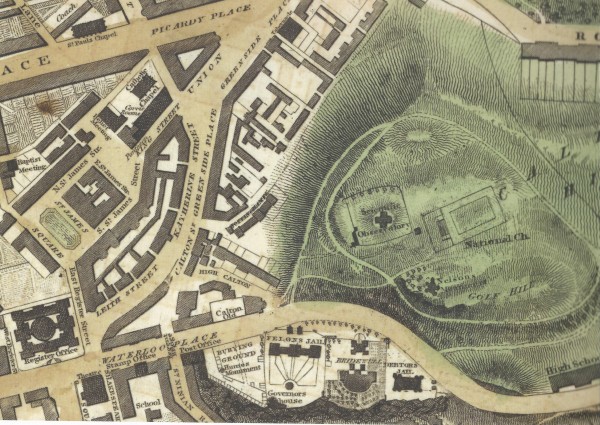 Extract from Plan of the City of Edinburgh 1823, from Edinburgh, Mapping the City. Courtesy of National Library of Scotland and Birlinn

Edinburgh - Mapping the City is a comprehensive history of Edinburgh, but it makes no reference to the Golf Hill entry. It has occasional references to golf, but no details of the main courses at Leith or Bruntsfield.

'Edinburgh - Mapping the City' is written by Christopher Fleet and Daniel MacCannell. It was published by Birlinn in 2014, in association with the National Library of Scotland, who hold the maps used in the publication. It is currently available in shops and on-line.