The Golf Trinity - why golf is definitely Scottish

Being the proof as to why golf is definitely, certainly, unquestionably, without doubt, beyond question, indubitably, undeniably, irrefutably, incontrovertibly, incontestably, unmistakably, categorically, decidedly, unequivocally Scottish. Really.

Forty years ago, a Dutch banker claimed that golf was not Scottish in an article that was widely quoted by well-respected journals. Subsequently, the main basis for the claim was discredited, but this has not stopped the 'fact' that golf was not invented in Scotland being oft repeated.

The official position of the Scots, as expressed by the Royal and Ancient Golf Club of St Andrews, has always been that: -

"stick and ball games have been around for many centuries, but golf as we know it today, played over 18 holes, clearly originated in Scotland."

This, at least, is incontrovertible, as the rules of golf, the 18-hole golf course, golf competitions and all the early records of golf were created in Scotland.

However, there are other good reasons to believe that the shape of the game was developed in Scotland, because only Scotland possessed the 'golf trinity' of club, ball and links that enabled golf to be created.

No descriptions of golf, or how it was played, exist in Scotland before the middle of 18th century, when pictures of golf (c 1740-46) and the rules of golf (1744) emerge. No golf clubs from earlier years have survived either. The oldest extant golf clubs,  called the Troon clubs, are believed to date to this same time period. Taken together, this evidence shows clearly that by the mid-18th century the game was recognisably modern golf.

However, there is an earlier reference of a 'Scottish' colf/golf club in the Netherlands, with a description which indicate that these types of mid-18th century clubs go back at least a hundred years.

In 1657, there is mention of a Scottish 'cleek' (Schotse Kliek) in a poem in the Netherlands. It is described as being made of boxwood with a lead weight in its head, much the same construction as later Scottish long-nosed clubs, but probably with a square toe. It was being used with a featherie ball (pennebal) and with the weight in the head it would create significant force and distance at impact.  The iron clubs used in colf were much more destructive on leather balls and iron clubs were originally only used in golf to extract the ball from hazards. Similar wooden clubs also appear in contemporary Dutch paintings and they are assumed to be the Scottish 'kliek'. 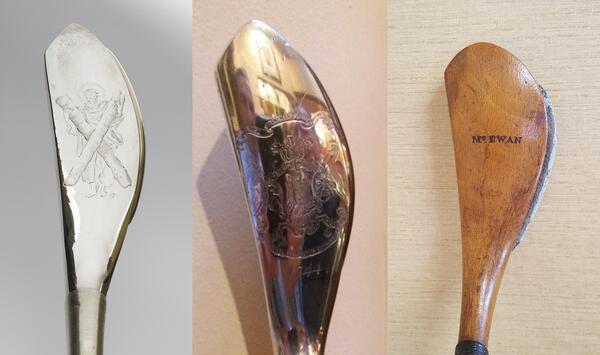 The fact that the club is described as 'Scottish' is significant as it implies that the Scots had their own design and manufacture for golf clubs, which was different to colf clubs. Of course, the first known purchase of golf clubs was from a bower (bow-maker) in 1502. These must have been wooden clubs and probably the pre-cursor of the Scottish 'kliek' design.

There were many bowers in Scotland throughout this period even though cannons were replacing bows in warfare. Making golf clubs would have been a natural development for bow-makers to take when archery was in decline and it meant that golf club-making could exploit the extensive industry of trained personnel. Recently, this website showed most of the Edinburgh bow-makers in 17th century can be traced to bowers who were known to have made golf-clubs as well.

The development of the golf ball is outlined in detail in From the Hairy to the Haskell.  There is no evidence that wooden balls were ever used in golf. No examples have been found in Scotland, nor any descriptions of wooden balls in golf. As far as we can tell, leather stitched balls were in use from the early days of golf, as they were for other sports in Scotland, such as football. In fact, Scotland possesses the world's oldest football, which bears an uncanny resemblance to later featherie golf balls.

Although golf balls were imported from the Netherlands in the 16th century, the Scots are known to have been making them in Leith and elsewhere. This means that the Scots had golf balls with the playing characteristics of a modern golf-ball from the very early days of golf. 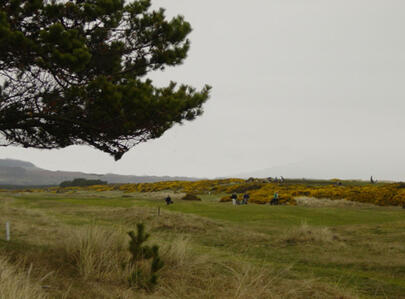 The links as they may have looked

The sea-side links in Scotland were the perfect playing ground for golf, with good drainage and hard turf.  Playing in fields of mud would never have produced modern golf. In the days before mechanised lawn mowers or course agronomics, it was no links, no golf. The links are not just the best type of golf course, they are the reason why it was created in the first place.

Recently, new analysis of the historical evidence shows that King James IV travelled to St Andrews in 1504 to play golf, implying the modern links game was well established in Scotland by the end of the 15th century. The King bought clubs and balls while he was there, showing that golf tourism at St Andrews goes back over 500 years!

The Scots invented golf and any rumours to the contrary are unfounded. All other prior stick-and-ball games had a different format, which was not as exciting to play and they all died out. The Dutch may have had the 'polder' land to produce surplus agricultural produce, ball manufacturing and the wealth for leisure games, including colf, but it was only the Scots who had the land (and the club and the ball) to develop golf into the game we have today.