A commemorative plaque to mark the site of Golfhall (the world's first golf clubhouse) has been put up at 28 Wright's Houses, Bruntsfield Links, Edinburgh. 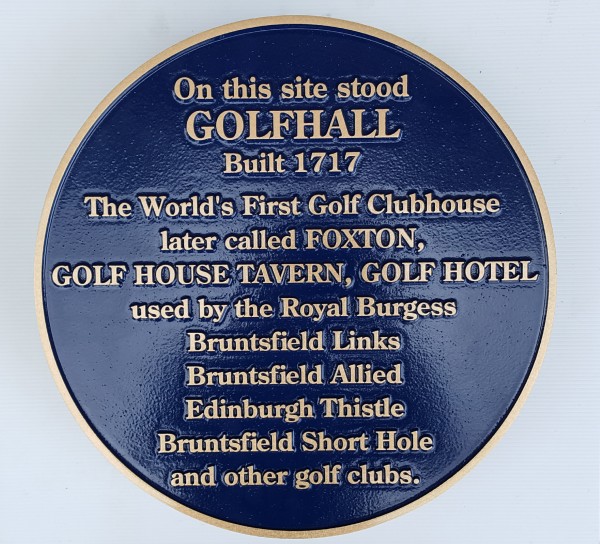 Golfhall was the world's first clubhouse.

Initially built in 1717 by James Brownhill as a commercial venture, it had a pub for golfers on the Links. Its first tenants included Robert Biggar, a vintner, champion archer and known golfer as well as George Neilson, bowmaker to the Royal Company of Archers and now known to have been a golf-club maker.

Golfhall's facilites would have played a key role in the formation of the first golf clubs and societies.

A decade or so after it was built, it was sold and became a private house, called Foxton, for some years before Thomas Comb and David Babtie bought it in 1760. Thomas Comb was a golf-club maker, who had been trained by George Neilson. David Babtie and his son were vintners who restarted the pub. This must have stimulated golf on the Links. Thomas Comb later bought out David Babtie and lived there until his death at the end of the 18th century.

Golfhall was thereafter in continuous use as the Golf House Tavern and Golf Hotel until the end of the 19th century, at which time links golf moved to the Braid Hills golf course and The Golf Tavern took over the pub business. More details of the tenants and golf clubs who used the Golf House Tavern can be found here.

Though the existence of Golfhall was known, its exact location was not, partly because of the change of trading names. The building was demolished in the 1950s with its history unrecognised.

Its location was rediscovered in 2014, when Neil Laird noticed that it featured in Paul Sandby’s watercolour of Edinburgh Castle with golfers in the foreground (a scene which had itself been mistaken for Stirling Castle for decades.) 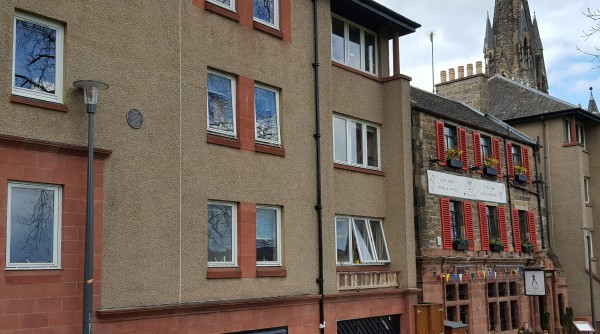 To avoid any confusion in the future about where it stood, a commemorative plaque, paid for by private subscription, was put up on the site of the building at 28 Wright’s Houses on 10th May 2019.

More details of Golfhall and The Golf Tavern are available in Bruntsfield Links – Home of Club Golf by Neil Laird 2017, available to buy online.