There are two conflicting theories over the origin of the word 'golf'. Could they both be right?

When golfers first began to write golf histories in the 19th century, they speculated that golf began in ancient times. The first history in the Rules of the Thistle Golf Club in 1824 credited the invention of the golf ball to an ancient Greek woman. Some claimed that the word was derived from the ancient Greek word κολάφος (kolaphos) meaning a 'blow with the fist' and others thought that the word 'gouf' (golf) was an old Scots word meaning meant 'to cuff'.

In the 20th century, etymologists poured scorn on these ideas and concluded that the derivation of the word golf was simply a pre-European language term meaning 'club', related to the old Dutch 'colf'/'kolf' and the Middle High German 'kolbe'. However, there is a obvious link between the theories and there could be truth in both.

But to begin at the beginning ... 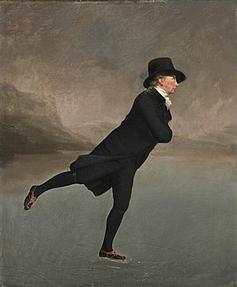 The Rev Robert Walker is well known in Scottish art circles, but not as a golfer or golf historian. He is the skating subject of a painting attributed to Sir Henry Raeburn and dated by his family to 1784. He was not a golfer, but he had been a Kolf player in the Netherlands, where he grew up and where he learnt to skate. He was also a member of the Royal Company of Archers and therefore he would have been acquainted with golf and golfers, who were among its members.

His importance here is that he contributed a description of Kolf for the Statistical Account of Scotland in 1791-99. In it, he explicitly claimed that the word Golf was derived from the word Kolf and that both were probably from the Greek word κολάφος (kolaphos). Kolf was an 18th century replacement for the old Dutch Colf game which was an old stick and ball game played in fields and on ice. Colf had died out by the end of the 17th century and, by the time Rev Walker was in the Netherelands, Kolf was a very different game played in a defined area between two poles. Kolf, in turn, also waned, but was later revived as Kolven, which is still played today.

The Dutch game called Kolf, from which the word GOLF is derived, as both are probably from the Greek word, κολάφος, is played in an enclosed rectangular area of about 60 feet b 25.

The Rev Walker did not quote any authorities for the derivation of Kolf and his use of the qualifying adverb  'probably' implies that is was just his opinion, although it may be based on information acquired in the Netherlands. Golf historians at the end of the century quoted Rev Walker, but they concluded that the derivation of Golf was more likely from the Germanic forms of Kolben (a club) and Dutch Colf/Kolf (a stick or club).

Some times the Latin word 'clava' is also mentioned as a possible root, probably because of its meaning as 'a club'. Though it has continued in other words, it does not seem to be the root for 'golf'.

Attention was also drawn to the Old Norse word 'kolfr' meaning the 'clapper' of the bell or a kind of bolt, from which, among other words, the Icelandic for a pendulum, 'kolfur', is derived.   Other derivative Icelandic words include 'kylfi' and 'kylfa' meaning a ‘club' or 'cudgel.’

Modern etymological dictionaries all follow this train of thought.

This may well be the immediate derivation of the word golf, but does it have possibly older cognate links?

The Greek word 'kolaphos' meant a 'blow' or a 'cuff' with the hand. This was translated as 'colapus' in colloquial Latin and 'colpus' in Medieval Latin, meaning 'a cuff on the ear' or 'a blow with the fist'.  Ancient ball games were mostly hand-ball games, such as 'harpastum', played with a small leather ball. Neither this nor any other ancient ball game has been directly connected to these words, but the balls used, such as 'harpastum' were probably similar, if somewhat larger than golf balls. It is commonly supposed that golf balls were derived from larger leather stitched balls, such as tennis balls, and the world's oldest football from the 15th century has an identical outer appearance to later featheries.

The words 'colapus' and 'colpus' have been credited as the derivation for the word 'coup' in French as well as for many diverse English words, such 'coup', 'coupon' 'copse' and 'coppice'. These derivations span the entire Dark Ages to Medieval times, and it is reasonable to believe that other words might also have undocumented links over the period.

Certainly, all the relevant words certainly appear cognate, being bi-syllables with inter-changable sounding consonants, mostly beginning with col/kol/gol followed by f/ph/v/b as the list below shows.

The conclusion to be drawn is that meaning of the word GOLF, though not the game, relates to old words meaning the 'striking' game, which later became the 'club' game, when the implement used became the dominant feature. It is clearly unreasonable to dismiss the idea the ancient origin as 'absurd' as some would-be etymologists have.

After this article was complete, an online search discovered a letter written by W.G. of Wimbledon Golf Club in the Golf magazine of 27th February 1891, where he outlined a similar theory 130 years ago. It seems only fitting to leave the last word to him:-

‘The game of “Golf,” as Englishmen call it, has been undoubtedly introduced from Scotland. How did it acquire that name amongst Englishmen?

In early Scotch official records the game is several times alluded to as “Gouff,” which accords with the ordinary Scotch pronunciation at the present day.

Some have sought for an origin in the Latin word “clava,” a club; and some in the Greek word “kolaphos,” a blow.

All these words no doubt are cognate, and belong to the Aryan group; but I think the expression is rather referable to the action of striking, than to the instrument with which the blow is struck. ......

On consideration, it would seem that the word “Golf” is of Scotch origin, and not of foreign importation, and that the form of the word, viz., “gouff” as used in Scotland is distinctly Scotch in its nature.

The game as played in Scotland for centuries past is essentially Scotch in its plan and characteristics, and little can be inferred from the fact that games at balls, with or without clubs, have been practised in foreign countries, for doubtless such games in some form or another are referable to periods of remote antiquity.