Molesey Hurst in south west London is the site of the first record of a golf match outside Scotland, after which the world's first golf trick shot was performed over the river at David Garrick's villa. It is now possible to provide more details about the event. 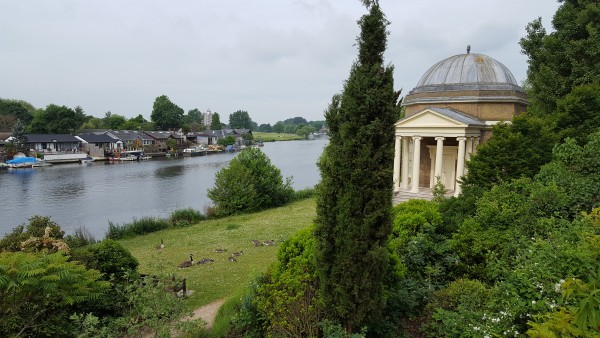 David Garrick's Lawn with his Temple to Shakespeare, looking towards Hurst Park (Molesey Hurst). The tunnel is behind to the left.

Molesey Hurst is the first place outside Scotland where we have a definite record not only of golf being played, but who played it and where and when they played. This is from an account of a visit in 1758 to London by Rev Alexander Carlyle from Inveresk, near Musselburgh, which he wrote up at length in his autobiography. He and John Home, the Edinburgh dramatist, and Parson Black, an Aberdeen minister, played a game of golf on Molesey Hurst. Afterwards, they visited David Garrick, the famous actor, at his house on the north bank of the Thames, about a mile west of Hampton Court Palace, almost opposite Molesey Hurst.

There are prior references to golf in England in the 16th and 17th centuries of varying authority. Some of these have been disproved, such as the one to the 'golf' in a letter by Queen Catherine of Aragon. It turned out that the word was the 'Scots' and not 'golf' at all. There are four other general references to golf that can be located in England and three of these are in London. The first two concern the eldest son of King James VI/I, Prince Henry, for which there are two records of him playing. The first is 1606 and is definitely at Richmond, and second was probably there as well or at least in London. Prince Henry died before his father, leaving his brother Charles to inherit the throne. After he lost the Civil War with Parliament, King Chares I was held prisoner for nine months at Newcastle 1646-47, where he is reported to have played golf 'daily' on Shield Field. A decade later, during the Commonwealth, there is a reference to the protection of the rights of golfers on Tuttle (Tothill) Fields in Westminster, where Vincent Square is today.

Molesey Hurst was the site of both cricket and horse racing in the early 18th century. Dozens of cricket matches  are reported to have been played there starting from 1731 and there is a depiction of a cricket game there in 1780, which now hangs at the MCC.  This is one of the earliest pictures of cricket. It clearly shows the sporting ground was where Hurst Park is today. David Garrick's villa can be seen in the background on the other side of the river.  The golf was probably played over the same area.

Over a hundred years later, a formal course was laid out by Molesey Hurst Golf Club, on the south side of Hurst Road. The club lasted from 1907-1935, when the land was sold for development. Nowadays, there is a recreational sports ground where the golf course was and East Molesey Cricket Club is based nearby.

The Rev Carlyle was a proficient golfer who won the Royal Musselburgh cup in 1775. He was called 'Jupiter' Carlyle because of his ruddy complexion. In his account of the trip to see David Garrick, he recounts that when the group were travelling through London, the party were cheered by soldiers of the Scots Guards, because they saw golf clubs in the back of the coach. Rev Carlyle makes no mention of a golf club at Blackheath or anywhere else and he mentions that other Scots in the party, including Robert and James Adam, who lived in England did not know how to play golf. It leads to the conclusion that there were few English golfers at the time. 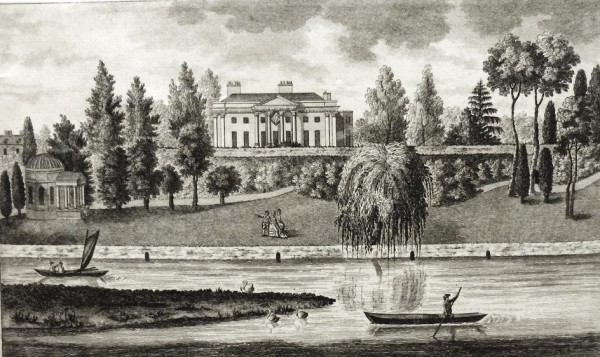 After the match on Molesey Hurst, the golfers repaired to David Garrick's villa. As this was on the other side of the river and there is no bridge nearby, this was presumably by boat.

David Garrick was a well-known and well-off actor. In 1756, he built a small octagonal building in his garden as a tribute to Shakespeare. This building still exists as a museum called 'Garrick's Temple to Shakespeare'. It can be clearly seen in a period etching published in 1779. Not seen in the picture is the tunnel on the right with its arch under the road to the river. 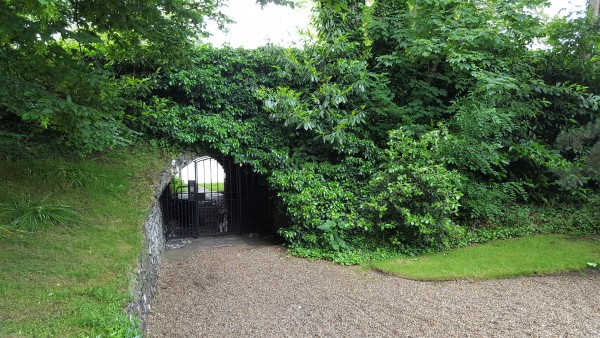 While waiting for dinner, which was being prepared in the Temple, Rev Carlyle performed a golf trick shot by pitching a golf ball through an archway in Garrick's garden into the River Thames. Afterwards, Garrick begged Carlyle to give him the club.

Having observed a Green Mound in the Garden opposite the archway, I said to our Landlord, that While the Servants were preparing the Collation in the Temple I would surprise him with a stroke at the Golph, as I should Drive a Ball thro' his archway into the Thames, once in three strokes. I had measured the Distance with my Eye in walking the Garden, and accordingly at the 2nd stroke made the Ball alight in the Mouth of the Gateway, and Roll down the Green Slope into the River. This was so Dextrous that he was quite surprised, and beg'd the Club of me, by Which such a Feat had been performe'd.

Taken from Olive Geddes 'A Swing Through Time' p84.

In his 'History of Golf', Robert Browning speculates that the club Garrick was given is the 'Home's golf putter' then in the possession of the Royal Blackheath Golf Club. There is however no evidence to support this. Recently Blackheath have announced the sale of the club (which they date to 1790) to fund the purchase of the golf course at Eltham.

Jupiter Carlyle and John Home were, at the time of the events above, quite notorious characters. In 1756, John Home had written a controversial play called 'Douglas', which Garrick, among others, had refused to perform. Jupiter encouraged and helped Home to put it on in Edinburgh, incurring widespread censure from the Kirk. Despite all this, both lived to a ripe old age. Home is buried in South Leith Parish Church and Carlyle is buried in Inveresk churchyard.