Musselburgh Museum on the High Street is hosting an exhibition called ‘Musselburgh – Cradle of Golf’ in July and August 2018.

Musselburgh is an old golf site and one of the oldest golf courses in the world, but its hey-days were the 19th century, when it was the home of all the important Edinburgh golf clubs and club-makers. The Cradle of Golf exhibition concentrates on the history from 1836 to the early 20th century.

The display has been organised by the Musselburgh Museum and Heritage Group, in partnership with Mungo Park, whose great-grandfather Willie Park Snr, a local from Wallyford, won the first Open Championship at Prestwick in 1860. In later years, Willie's brother and son won the Open as well.

Two other local men, Bob Ferguson and David Brown, also won the Open, thus producing five Musselburgh champions with 11 wins between them. This is a record unmatched by any other town in the world. All five champions are commemorated in a plaque on the wall of the clubhouse of the Musselburgh Old Course Golf Club in Balcarres Street nearby.

Musselburgh Old Links was the home green of the Royal Musselburgh GC, who were joined by the Honourable Company of Edinburgh Golfers, Royal Burgess GS, Bruntsfield Links GS and Warrender GC among others for varying periods during 19th century. Though all these clubs have now departed elsewhere, several of them have loaned prestigious trophies played for at Musselburgh to the exhibition.  Other golf memorabilia and artefacts have been sourced from the Ladies Golf Museum, the British Golf Museum and private collections, which creates a unique collection, probably not to be seen again.

Among them is a famous painting by Charles Lees called A Summer Evening on the Musselburgh Links: Golfers, which had recently been sold at Bonhams, the auctioneers in Edinburgh.

Musselburgh was the main manufacturing centre of hickory golf clubs for decades. The principal club makers there were the McEwan family, who dominated club-making at the time. John Gourlay, the last of the famous featherie golf ball makers was also based in Musselburgh from 1844. For a few years, he made featherie golf balls there, though they were replaced by gutties by the middle of the 19th century. John Gourlay was based at the old grandstand, which is no longer there, but the McEwan house at 39 Mill Hill still exists. They are just some of the dozens of artisans who worked in the golf industry at Musselburgh during the 19th century. 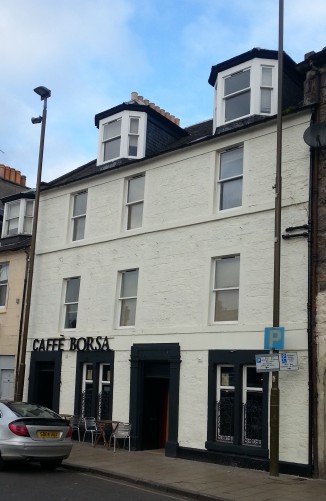 Many important events and matches took place at Musselburgh. Some were celebrated at Mrs Forman's which still exists at the other end of the course, though it is now a private house and no longer a pub.

One notable former golf pub that can still be visited is Mrs McKendrick's (aka the Musselburgh Arms Hotel) just a few doors down from the museum on the high street. It is now an Italian restaurant and a suitable place for a meal before or after visiting the exhibition.

Four golf societies built clubhouses at Musselburgh, which can still be seen in Balcarres Road. Only one of these still operates as a golf clubhouse, which is the one built by the Royal Burgess and now used by Musselburgh Old Course Golf Club.

The Cradle of Golf exhibition runs from 6th July to the 1st September 2018. Entrance is free.

Musselburgh Museum is on the High Street, adjacent to the old Town Hall, Musselburgh, EH21 7BZ. The Museum is manned by volunteers and is open on Thursdays, Fridays and Saturdays from 10.30 am to 4 pm.

The golf exhibition is supported by East Lothian Council and Musselburgh Common Good Fund. It was officially opened by Lord Wemyss, whose family has been involved with golf since the early 18th century. A summary of Musselburgh's glory days is available on-line.