The Scots are somewhat casual about the their golf heritage. Many golf club-houses have disappeared completely and many more are no longer used as club-houses. 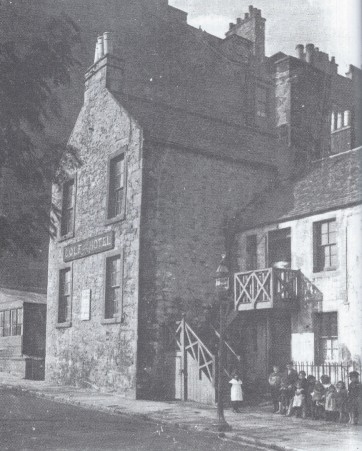 The first known golf 'pub' was Maggie's Houff at Bruntsfield Links, dating from beginning of 18th century. Its location is unknown.

It was followed by Golfhall, built in 1717 at the west of Bruntsfield Links. This building was the catalyst for the creation of first golf club, so it was the world's first golf club-house even before there was a golf club!  Later it would be extended and became known as the Golf House Tavern and Golf Hotel at 27-28 Wright's Houses.

The Royal Burgess and Bruntsfield Links golf clubs were both based there in their early days. Other clubs that used Golfhall later included Bruntsfield Allied and Edinburgh Thistle. They moved to playing at Braid Hills in 1889, though, for some years afterwards, they continued meeting at the Golf Tavern, which had taken over the Golfhall function. The last club to use the 'club room' in the 'old Golf Hotel' was the Bruntsfield Short Hole Golf Club, until September 1905.

Golfhall was demolished c 1958 to build a petrol garage and three decades later the land where Golfhall stood was used for student association housing. There is a short-hole golf course at Bruntsfield and the Bruntsfield Short Hole Golf Club now use the Golf Tavern.

A complete history of Golfhall was published in 2017. 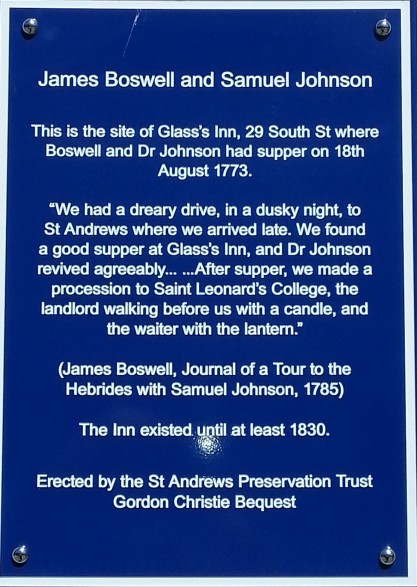 The earliest hostelry where the St Andrews' golfers met was Baillie Glass’s Inn on South Street, where they arranged to dine regularly from 1766.

This was not a club-house per se and they used other taverns around St Andrews for their meetings and balls, such as the Cross Keys Hotel in Market Street. The hotel is now a private house, but its old bar still exists as The Keys Bar.

The inn is mentioned in James Boswell's Journal when he visited St Andrews with Dr Samuel Johnston in 1773. They stayed over the road in St Leonard's College, which is still there.

Glass's Inn appears on the 1820 map as the Black Bull Inn and was redeveloped in about 1830. The site is now an iron-mongers, having previously been the co-op district offices.

Later in 1835, Hugh Lyon Playfair opened a facility called the Union Parlour on Golf Place, which was superseded by the R&A club-house in 1854. In time, the parlour was demolished and replaced by the Grand Hotel. This became Hamilton Hall, a student residence, which has recently been converted into multi-millionaire flats, with views overlooking the 18th green.

The Leith golfers built a club-house in 1768 on the south-west corner of Leith Links, which they sold in 1833, after which they moved to Musselburgh. It continued as a tavern but was eventually demolished. The Leith Academy Secondary School was built on the site. When the Academy built a new school the old building became part of Queen Margaret College and has now been converted into flats. 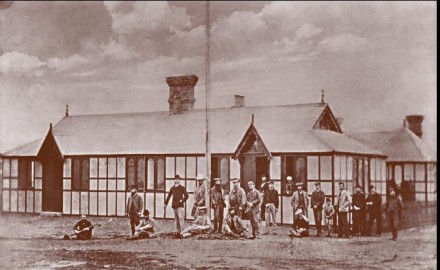 Problems with club-houses were not to unique to Scottish clubs. The golfers at Wimbledon had similar issues which in their case contributed to a schism in the club between London Scottish and Royal Wimbledon.

To begin with the golfers all used 'Mrs Doggett's Cottage' for hospitality and the 'Iron Hut' for keeping their clubs. The Iron Hut was a prefabricated building which the military used as base for rifle practice.  Both Mrs Doggett's and the Iron Hut are gone and the two clubs each have their own club-houses.

These types of 'huts' were often used by golf clubs in this period and their manufacturers were regular advertisers in golf magazines. For example, there were similar arrangements at Westward Ho!, where the Royal North Devon Golf Club had a prefabricated iron club-house, supplied by Messrs. Isaac Dixon & Co of Liverpool in 1887. Apart from being cheap, they had the advantage that they could be dismantled and moved, which the Royal Wimbledon did in 1882 to their second 'iron room'. This  serves as their Old Dining Room today.

In 1872, three decades after the Bruntsfield Links Golfing Society began playing medals at Musselburgh, they bought and converted an old Episcopal Chapel on Millhill as a club-house. The Minister of the former church had founded Loretto school and had built a better church up the road, using his new wealth and the proceeds of the sale.  Later the Bruntsfield Links society built another club-house at Musselburgh in 1886. The church was pulled down in the following century for a modern housing estate.

Perth is where King James IV bought the first set of golf clubs in 1502 and thereby officially started golf. So Perth may have the oldest building where golfers first met. The Perth golfers are known to have frequented the 'House on the Green' at 3 Westgate, now developed into housing. 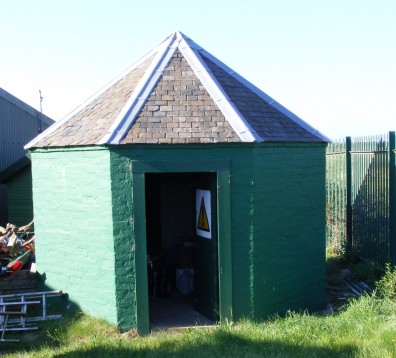 The first club-house of Prestwick Golf Club is now a café opposite the Red Lion pub, where the Club's inaugural meeting took place in 1851. The chemist next door is the former house that the Prestwick club built for Old Tom Morris to induce him to come from St Andrews and be their 'Keeper of the Green'.

Old Tom Morris was a founding member of the Mechanics Club at Prestwick, renamed Prestwick St Nicholas in 1858. They were granted playing rights on the old Prestwick course, but later moved to their own course further south. Although nowadays St Andrews claims Old Tom as one of theirs, his first three Open victories were as a member of Prestwick St Nicholas, of whom he was made an Honorary Member in 1861.  In 1863, while still playing at old Prestwick, the St Nicholas Club was given permission to use a building on the course called the 'Lunch House' for refreshments.  This was renovated in 1993 can still be seen today behind the 16th tee.

For a short period after their revival at the end of the 19th century, Leith Thistle Golf Club used 8 Vanbrugh Place as their club-house, where William Dunn the golf club-maker worked. The Seafield Golf Club used 7 Vanbrugh Place, where Walker and McLeod the golf ball-makers were. When they disappeared, so did golf at Leith Links (and vice versa). 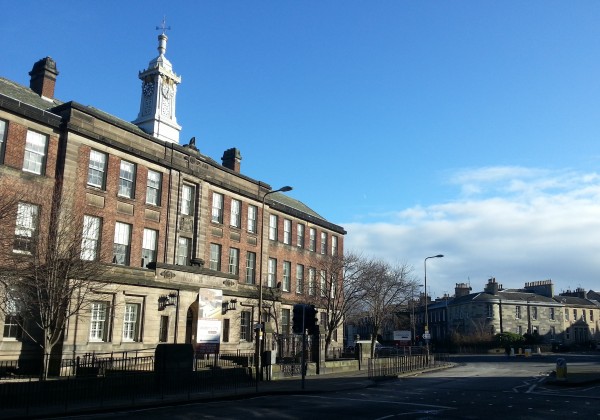 On the left is the old Leith Academy Secondary School, site of 1768 Leith Golfers' club-house and on the corner, centre right, is 8 Vanburgh Place last club-house of Leith Thistle at the end of the 19th century.

The four senior golf clubs at Musselburgh all built club-houses in the 19th century. All the buildings still exist on Balcarres Road, though only one is still a golf club-house, that of the Royal Burgess, now used by the Old Course Musselburgh Club. The others have found a variety of uses. 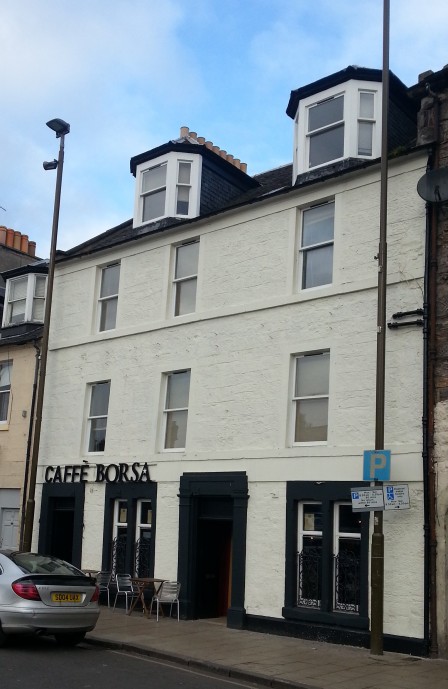 From 1836, when the Honourable Company of Edinburgh Golfers first started playing regularly at Musselburgh they used McKendrick's Inn at 49 High Street for dining. In time this became the Musselburgh Arms Hotel, but is now a more modest café with flats above. Internally it looks older than it does outside. Later the Hon Company used the race grandstand as their clubhouse with outside catering provided by Mrs. Forman who would carry the meals the length of the course to serve them.

In 1865, almost 100 years after they had built their first Leith club-house, the Hon Company built their second one on the west of the course near the first tee.  When they went to Muirfield in 1891, the second New Club of Musselburgh took it over and, in 1908, the Royal Musselburgh merged with them and moved in. They all departed in 1925 for Prestongrange nearby and the Musselburgh building is now a nursery at one end and a Lodge at the other.

Although the Royal Musselburgh were the oldest club there, they did not build a club-house until 1873. It became a private residence after they moved next door in 1908, as outlined above.

The last golf club-house is still a social clubhouse but not for golf. It is the 1886 Bruntsfield Links' ornate, red stone club-house, on which the Club logo can still be seen over the windows. They used it briefly for just 12 years in between the Episcopal Chapel described above and moving back to Edinburgh to Bartongate in 1898 where they built a magnificent club-house with incomparable views over the Firth of Forth.

At Montrose, the first club-house was rented from the Council. It was Southfield House used from 1866 to 1890. It is just over the road from the present Royal Montrose club-house, built in 1906.  In the intervening period the club had moved a mile away to the south to build a club-house at Stone Bridge.  Even at the time many members thought that this was a mistake and resigned. They were proved right, as the course on the south was abandoned and a new one laid out to the north, meaning the Club had to come back to where it started.

There are three other abandoned club-houses near the first tee in Montrose (Mercantile Golf Lodge 1891, Victoria Roo's Leap 1895 and Caledonia Dorwood Road 1901) and four others elsewhere in the town, including Royal Albert Stone Bridge 1890 and Victoria Faulds Road. One is a restaurant and the others are houses. 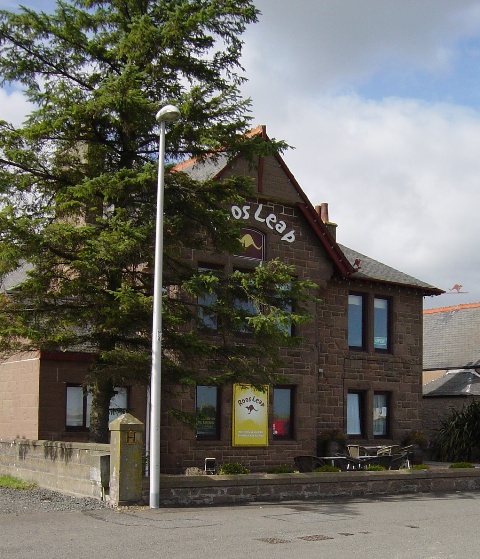 One of the most fortunate golf clubs in the club-house stakes was Dunbar Golf Club. In 1871, the Duke and Duchess of Roxburghe kindly gifted them their first clubhouse. The building is now a private house called Beachcote on Golf House Road,  just on the right at the entrance to the course. 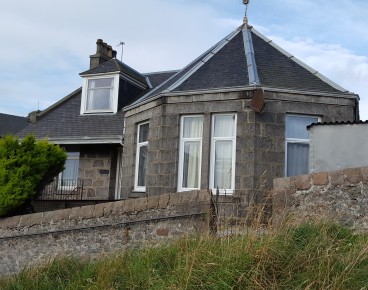 Possibly the least well-known former golf club-house is the one in Aberdeen at the top of Constitution Street near the Queen's Links. Its location can be seen on the map here beside the 18th green. It is now a house.

At Gullane, the first Golf Tavern, which the golfers used for their convivial hospitality, is now a house to the right of the visitor club-house. Had the golfers hung on to it, it would now be the oldest golf pub in the world. The second club-house which they built in 1890 is now the Old Clubhouse on East Links Road, a popular pub serving golfers. This at least is one piece of golf heritage which is thriving.

The fate of Mrs Forman's at Musselburgh is still unknown. Let us hope that it does not go the way of the ones above. There is not as much old golf heritage left as one might think.