Since publishing details of the oldest golf clubs in North America, further research has produced more candidates for inclusion on the list of early golf clubs in USA; a new candidate for America's first golfer; and an earlier date for the importation of golf clubs in America.

It has long been known that the first mention of golf in an American publication is a commendation of its health benefits in 1772 by Dr Benjamin Rush, signatory of the American Declaration of Independence and Surgeon-General of the Middle Dept of the Confederate Army.

Dr Rush had studied medicine in Edinburgh, and was a contemporary of Peter Fayssoux, from Charleston, who also qualified at Edinburgh. The main hospital was then in Infirmary Street about a kilometre from Bruntsfield Links. It is not known if Benjamin Rush was a golfer, but R&A records show 'Pet. Fayssoux' was one of 11 new members on 3rd September 1767 and what is possibly Peter Fayssoux's signature has been found as a subscriber to the silver club at St Andrews in the same year. (Through The Green September 2014 pp 16-17)

This makes Peter Fayssoux the first known American born golfer and, in time, the first 'US' golfer. He went on to serve in the War of Independence and features in Birth of the Bill of Rights 2004 Vol 1 Biographies (page 63). 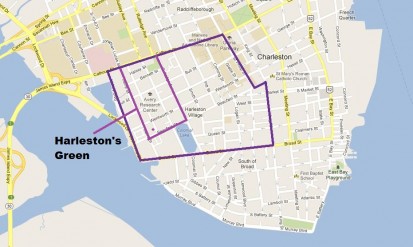 Site of Harleston's Green where golf was played 1786

In determining the oldest golf clubs and course, there are the usual problems of continuity of existence; evidence of early golf play being adopted for the club date; and club dates and course dates being intermingled. In addition, many US clubs were formed as general sports clubs before they played golf, all of which can produce anomalies in the dates published.

Sadly the South Carolina Golf Club of Charleston, recorded as founded in 1786, is no more. There were annual notices, from 1788 to 1799, in the local press of golf meetings on Harleston's Green with the club's office holders, but nothing thereafter, though the Country Club of Charleston claims to be its inheritor in title.

As previously noted, the Savannah Golf Club has found newspaper reports which demonstrate its title, if not its history, goes back to 1794, though its course only dates to 1899.

Although the Burlington Golf Club officially dates to June 7, 1899, Burlington, Iowa, has a claim to have had one of the first courses laid out in the USA when Andrew Bell brought home golf clubs and balls in 1881 from Scotland and built a course of four holes on his father’s farm.

The recent discovery of notes in a deposit box, owned by the Edgewood Club, had the following two non-contemporary entries in summary:

The golf course was expanded to 9 holes in 1916 and is still a 9-hole course today, measuring 3,010 yards and very little different from the original. The club was founded by the Livingston's, Halls and Hunt’s families for their own use and is still a private club, though one which has had several distinguished members over the years.

The significance of the documentation is not clear, but if part of the course does date back to 1884, this would make it the oldest course in use at the same location. 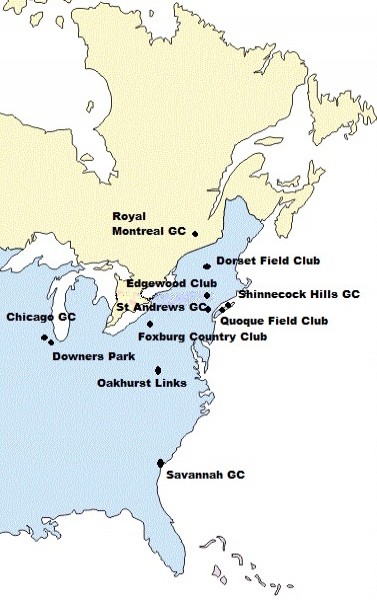 For details of other clubs and courses see New World Oldest Golf Clubs and Courses.

The Dorset Field Club was organized mostly by golfers from Troy, New York, as listed on the club's website.

The Dorset Field Club claims to have a map of a 9-hole course from 1886, which is the date of the first term of the first President of the club, A W Harrington, Junior. The original clubhouse is believed to have been a 'golf room' on the second floor of his residence on Church Street. The present clubhouse, called Woodruff Hall in honour of one of its members, dates from 1896, evidenced by an inscription on the clubhouse.

The Foxburg course owes its existence to English cricket. Cricket in America, started by English ex-pats, is older than generally supposed. The oldest  'country club' in America is the Philadelphia Cricket Club, founded in 1854.  In 1884, James M Fox, a member of Merion Cricket Club (1865), travelled to Britain, as a one of the 'Gentlemen of Philadelphia', effectively the American cricket team. 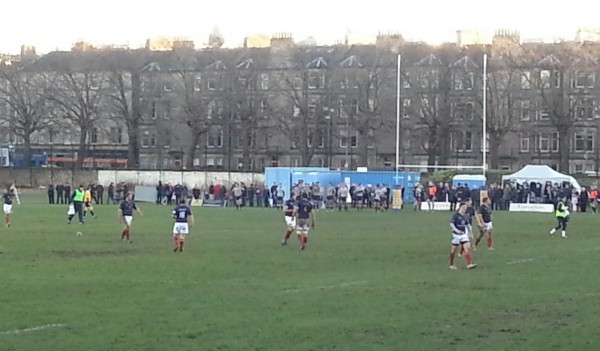 Among other matches, they played Scotland at Raeburn Place, where Scotland won by 5 wickets. Raeburn Place is the home ground of the Edinburgh Accies rugby club (founded in 1857 and the oldest rugby club in Scotland and the UK) and is famous as the site of the first rugby international in 1871 against England.  Today, Scotland's international cricket matches are played at the Grange, next door to Raeburn Place.

After the cricket, Fox visited St Andrews where, allegedly, Tom Morris Senior taught him to play golf and supplied him with equipment and 'gutties'. On his return, Fox created an eight hole course on the Fox estate.

Local support for golf grew and a group, which was to become the Foxburg Country Club, arranged for a more extensive golf course to be laid out in 1887, on land provided rent free by Fox. The course was expanded to nine holes in 1888. The clubhouse, built in 1912, was acquired by the club in 1942. The second floor now houses the American Golf Hall of Fame (not to be confused with the World Golf Hall of Fame in Florida).

There are records of private individuals laying out golf holes and playing at York Country Club in 1885 and at Sarasota in Florida 1886, but the clubs and courses did not emerge until some years later.

For those interested in more details and more clubs there is an ongoing discussion on the Golf Club Altas forum. The original article What were the first 76 golf clubs in the US? has been archived.