The curious story of how the first golf-club maker's trademark logo was created. 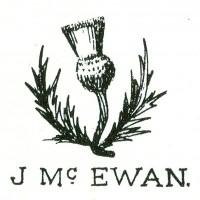 James McEwan is the first golf-club maker for whom there are any known extant golf clubs. One of the reasons why we know they are his clubs is because he was the first club-maker to stamp a 'cleek mark' on his wooden clubs to identify them. His trademark was a thistle with the words 'J McEwan' underneath. The question is why did he start using this?

It is commonly held that James McEwan came to Bruntsfield from Stirling in 1770. Certainly, he was in Edinburgh by 1775, when he was admitted as a Burgess. Apart from this record, there is no contemporary information of his existence. James McEwan does not appear in any directory as a golf-club maker, when other club-makers do. Until recently, the early McEwan history has been based solely on a later family account of events, published in 1896.

The McEwan family were the most important golf-club making dynasty of the 19th century. They operated exclusively from Bruntsfield for fifty years before opening premises in Musselburgh in 1847, which became their main base of manufacturing. They retained the Bruntsfield connection as long as links golf was being played there, until the end of the 19th century.   There are not many surviving clubs known to have made by James McEwan, but they are several by his son, Peter McEwan, who took over the business on James's death in 1800. Peter is recorded as actively trading from 1806 to 1836, supplying golfers at Bruntsfield Links and St Andrews. He simplified the logo to the word 'McEwan', which was used by subsequent generations of the family.

Stamping a design on wooden golf clubs was nothing new during the 18th century. The oldest extant clubs in the world are the 'Troon' clubs, which can be seen at the British Golf Museum. They have a logo stamped on them with a crown, the initials 'J' and 'C', a mullet (heraldic star) and a thistle inside a diamond shape. The clubs are thought to date from mid-18th century and the logo is believed to be that of the owner, not the club-maker. There are other contemporary examples. The first silver golf club, donated by the City of Edinburgh for the Leith Golfers' completion in 1744, carried the City crest and the date. Ten years later the silver club used for the first St Andrew's competition also has a Scottish themed mark. So it looks as if imprinting designs on golf clubs was not unusual.

The question is why did James McEwan decide to put his own name on his clubs. New evidence suggests that the reason probably stems from events that took place at Bruntsfield Links between 1774 and 1782, during James McEwan's early years as a club-maker.

James McEwan was not the first or only club-maker at Bruntsfield. The first known is George Neilson, who was the official bow-maker to the Royal Company of Archers from 1720 to 1760, trading at Golfhall on Bruntsfield Links and nearby. Nielson also made golf clubs. When he retired in 1760, his place was taken by his apprentice, Thomas Comb, who owned Golfhall by this time, where he made his bows and golf-clubs. Comb was still actively trading at Bruntsfield when James McEwan arrived, but Comb was dismissed as 'Company official' and bow-maker by the Royal Company in 1778, when questions were raised about the quality of his bow-making services.

At this point, things took a decided turn for the worse for the Royal Company, as Comb's successor was his apprentice Andrew Donaldson and the quality of his work was dire. Donaldson worked at Wright's Houses near Comb and had been 'co-official' and bow-maker since 1774, but there were complaints that he was supplying sub-standard bows and charging 'exorbitant prices'. The complaints were so serious that the Royal Company decided to take extraordinary action and introduced the first quality control system. This included an approval process and a brass stamp to mark the bows and arrows.

"The Council, having had many complaints about insufficient work in bows and arrows made and presented by the Company's present officer, whereby young shooters, not being competent judges of such work, were frequently imposed upon, and exorbitant prices exacted for the same; they resolved and appointed that in time coming the Company's officer shall upon no occasion offer to sell any work of his own, either bows or arrows, until the same is previously examined and approved of by the judges of the Company for the time, or such other of the members as shall be appointed for that purpose; and that a stamp of brass be prepared to be impressed upon all such work as meets with the approbation of the judges; and recommends to the Secretary and Treasurer to get a proper stamp made with the following mark or motto thereupon, 'R. C. Archers,' to be impressed with proper ink, so as to bear evidence of such work having been examined and approved of."

Council Minutes from the History of the Royal Company of Archers by Sir James Balfour Paul. Published 1875. 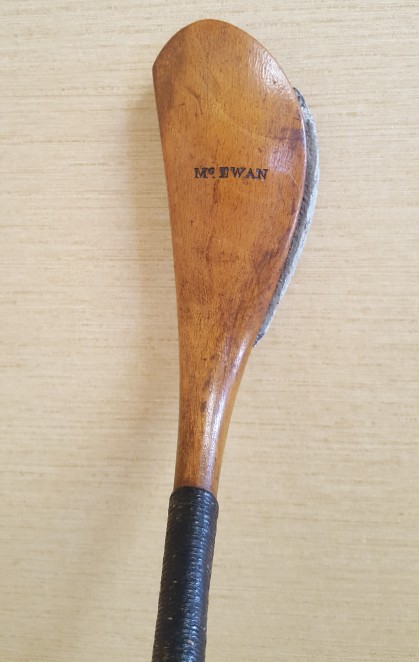 Shortly after the complaints about his bows, Andrew Donaldson was reprimanded for failing to fulfil his other duties as 'Company official', such as giving notice of meetings to the archer members. The Royal Company discussed appointing a 'cadie' to do the job instead.  Luckily for all parties, Andrew Donaldson decided to join the army in 1782, which probably spared him and the Royal Company the embarrassment of his dismissal.

Andrew Donaldson also made golf clubs and it is likely these were just as badly made as his bows. They would certainly not have been as well made as those of James McEwan. This raises the intriguing possibility that James McEwan realised that it would be beneficial to his business to differentiate his product from the inferior offerings of his competitors. He may have seen or got to hear about the Royal Company's proposed solution of stamping the bows with 'R. C. Archers' and realised its advantages.

As the thistle is seen on the 'Troon' clubs, it may have been a common design to which James McEwan added his name.  The 'McEwan' stamp was not only an assurance of quality for the purchaser, but a very early example of marketing. Other golfers would see the name and know where to go for their clubs.  There was a developing mass-market for golf and marketing would have been more important while personalisation of clubs would have been less important. All golf-club makers have copied him since then down to the present day.

The world’s oldest continually-used commercial logo is that of Twining's tea, created in 1787.  James McEwan almost certainly predates this.

There is a suggestion that Andrew Donaldson was appointed as professional to the Blackheath golf club a few years later. If it was he then he must have been reasonably competent, as he was there for a decade.

However, if James McEwan trademarked his clubs to differentiate them from Donaldson and others, then maybe we should give Andrew Donaldson some of the credit. Without his poor quality bows, we would not now know who made which golf clubs. Of course, it could be that the Royal Company got the idea of a quality control stamp from McEwan. We will probably never know. At the very least, it is a curious coincidence.