Robert Chambers Jnr was the first individual club champion golfer in 1858. Yet today he is somewhat overlooked in golf literature. 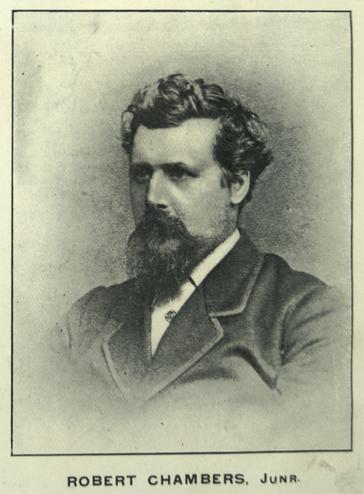 Robert Chambers Jnr was born in 1832, the son of Robert Chambers Snr, who had co-founded the publishing company W & R Chambers with his brother, William Chambers.

The Chambers brothers were self-made, very respected and successful individuals. William Chambers became Provost of Edinburgh and is honoured today with a statue in Chambers Street, named after him. Robert Chambers Snr made an important contribution to intellectual progress with his work Vestiges of the Natural History of Creation, which was published anonymously and which previewed the Evolution of the Species by several years. Robert Chambers Snr was a golfer and honorary member of Royal Musselburgh Golf Club. He lived for many years in St Andrews, where he wrote Vestiges and was given an honorary doctorate by the university. Robert Chambers Snr died there in 1871 and was buried in the cemetery of the ruins of the cathedral.

Robert Chambers Jnr married Laura Anderson with whom he had several children. He joined the family publishing business in 1853 and, in 1862, he wrote a golfing book called A Few Rambling Remarks on Golf, full of facts and tips on golf. This is still an esteemed book and in 2012 a first edition copy sold for over £5,000.  Robert was also active in the production of the first edition of Chambers's Encyclopædia and in 1874, he became editor of Chambers's Journal, to which he was also a contributor.

However, it is his golfing achievements which are probably more notable. Robert Chambers Jnr represented The Bruntsfield Links Golfing Society in the Grand National Tournament held on the Old Course at St Andrews in 1858, when he beat Mr Wallace of Leven in match play. Mr Wallace was a very good player, but his slow play disconcerted many of his opponents apart from Robert, who held his nerve to win on the last green. This was the first individual golf championship and Robert therefore effectively became the first national golf club champion. Robert won a set of silver plates for his victory and the Bruntsfield Links club held a dinner to celebrate. This was probably at the present day Golf Tavern, which was their club-house at the time.

It was suggested by Captain Greenhill that it would be very desirable the Club should have a special meeting to rejoice with our member, Mr. Robert Chambers, as the Champion Golfer of Great Britain; and it was unanimously carried that Mr. Chambers should be invited to a dinner for that purpose, and that the Council be entrusted with the arrangements.

This was not Robert Chambers only notable golfing result. In 1861, he placed 10th in the 1861 Open Championship, held at Prestwick Golf Club, Ayrshire, Scotland. It was the second 'national' competition at Prestwick, but the first to be 'open' to amateurs as well as professionals, and thus considered by many as the first true Open. Ten professionals and eight amateurs contested the event. Robert was the second best amateur, with a total was 187 for three rounds of the 12-hole Prestwick course. This was only three strokes behind Major Fairlie, the top amateur, who was playing on his home course.

In 1869, Robert Chambers Jnr and George Morris travelled to Hoylake on the Wirral in England, where they laid out the first 9-hole course for the (Royal) Liverpool Golf Club.  Robert Chambers formally opened the club on 5th June 1869. The local press described him as a 'champion' golfer and were clearly delighted to have him there. However, there were also family connections involved. The instigator and first captain of the Liverpool club, James Muir Dowie, had married Anne Chambers, a sister of Robert Chambers Jnr. George Morris, younger brother of Old Tom Morris, was for many years in the employment of Robert Chambers Snr, Robert's father.    It should also be noted that Jack Morris, George's son who had accompanied them on the trip,  stayed on to be the first professional at Hoylake.  Golf in those days was a much smaller world than today.

Almost as famous as his golf victories is the time when Robert umpired the match between Old Tom Morris and Willie Park Snr at Musselburgh in 1870. The match became one the most controversial in golfing history. Old Tom and Willie Park were playing a series of rounds over various courses in a high stakes match. Musselburgh, the last course to be played, was Willie Park's home course and the crowd of several thousand was very partisan and interfering with play.  At the start of the very last round Old Tom was one hole up over the whole match, but, after the hole at Mrs Forman's, Willie Park was just ahead with 6 holes to play and the crowd's behaviour was growing increasingly unmanageable.

At that point the players retired to Mrs Forman's for refreshments. Willie returned to play on, but Old Tom did not. As referee, Robert Chambers had decided that the play should be suspended and the remaining 6 holes of the match would be postponed until Saturday morning, because the conduct of the onlookers 'rendered fair play an impossibility'. Park protested that this was beyond the referee's remit and finished the round in 21 strokes to claim the match.  Old Tom Morris abided by the referee's decision. On Saturday morning, Willie Park turned up, but refused to play. Old Tom played the last six holes in 28 strokes by himself and Robert Chambers then declared him the winner.

"As referee in the match between Morris and Park on April 22, and in terms of my decision, the remaining 6 holes were played by Morris this day, Park declining to finish the game, I therefore declare Morris to be the winner. (Signed) R. Chambers, Jun., Musselburgh, April 23, 1870."

Willie Park Snr did not accept the result and he 'arrested' the stakes. After months of arbitration, the match was declared void.

Robert was also a prominent member of Tantallon Golf Club at North Berwick, where he was Captain for eight years from 1880. He presented the Club with a trophy in 1883 which is still contested today. In 1884, he suggested that they should sell the Club tent which was used on match days and acquire a permanent club-house, but the suggestion was not taken up until 1896 when Tantallon bought Point Garry Cottage. 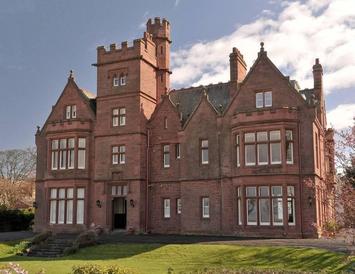 In 1885, Robert Chambers moved from Edinburgh to North Berwick and built a substantial house called St Baldred's Tower, which is still there today, above the park in the east of the town. This was much larger than his town house in Edinburgh. Robert was made a Burgess of the North Berwick Burgh in the same year.

His eldest daughter, Violet Chambers was an early woman golfer and sometimes attracted a following of spectators who were curious to see a lady playing golf in North Berwick. Later she would become a noted author and spiritualist.

In 1883, Robert's uncle, William Chambers died and Robert inherited the responsibility for the publishing company, W & R Chambers. Robert assisted Alexander Ireland, in the preparation of the 1884 edition of his father's Vestiges of the Natural History of Creation, which was the first time Robert Chambers Snr was publicly acknowledged as its author.

In the final years of his life Robert was supported in the publishing business by his eldest son, Charles Edward Stuart Chambers, who was himself a golfer, golf writer and member of Honourable Company of Edinburgh Golfers. As a consequence of this membership, C E S Chambers donated his father's prize as 1858 champion to the Hon Co of Edinburgh Golfers, although, of course, there was no direct connection.

When Robert Chambers died in 1888, Tantallon Golf Club sent a note of condolence to his widow.

The Secretary reported the death of Mr Robert Chambers, the captain of the club and donor of the Chambers Cup. The meeting ordered the following minute to be recorded - That the meeting of the Tantallon Golf Club deeply regret the death of their esteemed captain, Mr. Robert Chambers, and desire to record their appreciation of the valuable services he has rendered to the club during his period of office. His position as one of the most skilful players of his day, his genial disposition and his social influence combined, have largely contributed to the remarkable prosperity which has marked the history of the club during his captaincy. The club desire that a copy of this minute be sent to Mrs Chambers, and the secretary was instructed to convey the deep sympathy of the club with her and her family in their bereavement.

Robert Chambers Jnr died on 23 March 1888 at his house in Claremont Crescent in Edinburgh. He is buried in the southern part of the Dean Cemetery, on the north side of one of the curved paths. His wife and son C E S Chambers and some of his children, who died in infancy, are interred with him. 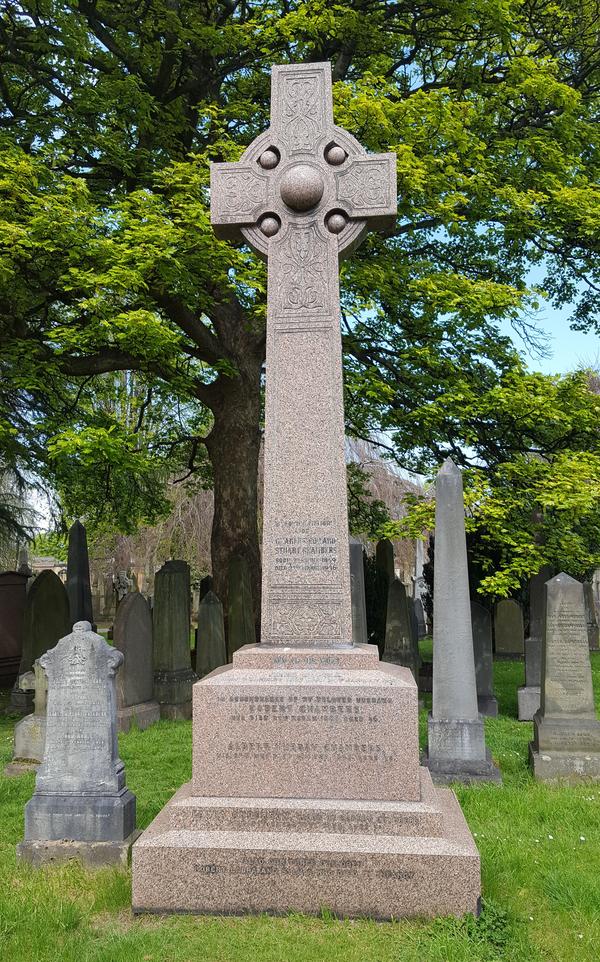 Grave of Robert Chambers Jnr and his son C E S Chambers and their wives.