Green fees for the golf courses mentioned in this website vary from £12 to £300 per round per person, depending upon what time and date you play. That is definitely golf to suit all pockets.

I was recently sent a list of the ten most expensive Scottish golf courses by Allan Ferguson, a writer and travel consultant, whose mission is encourage good value golfing in Scotland for foreign golfers. He also included an analysis of cost increases for these courses over the last three years, most of which have gone up by between 10% to 25%.

Having just visited Skibo Castle, I noticed that it was missing from the list and in researching this I found that there are other lists of expensive Scottish courses, though they too seem to be missing a few candidates and are a bit out-of-date. That set me wondering what the current costs were for the golf courses on this website.

After the necessary research and arithmetic, it turns out that the 18 oldest golf courses in the world can be played for just under £1,700 per person, in total, even in the high season. This figure would come down to £1,000 pp if played at the cheapest times possible, an average of about £50 per course. That includes the European courses. Three Scottish courses (Kingsbarns, Prestwick and St Andrews Old Course) account for 40% of the total fees. Even in high season, most of the other courses only cost between £50 and £100 per round and three courses cost under £20 (see below).

The profile of costs for the 18 oldest golf clubs and societies is very similar. The total green fees would be £1,800 to £1,900 pp in the high season, depending on the courses chosen, and £1,000 pp (or less) off-peak.  Three clubs (Kingsbarns, Royal Aberdeen and Muirfield) make up 37% of the total cost and the rounds at the other clubs would all be between £25 and £150.

The most expensive commercial course in Scotland is currently the Ailsa course on the west coast at Turnberry, which is owned by the Trump organisation, associated with the current President of the USA. It has recently raised its weekend green fees to £375, with a discount for hotel guests and week-day play.  This is 50% higher than the fees were three years ago, which may be related to the recent investment at the hotel.  The course dates originally to 1902, but is better know for hosting the Duel in the Sun in 1977 between Tom Watson and Jack Nicholas. (Elsewhere, at the Menie Estate course in Aberdeenshire, Trump International are reducing the golf prices, presumably for lack of demand). 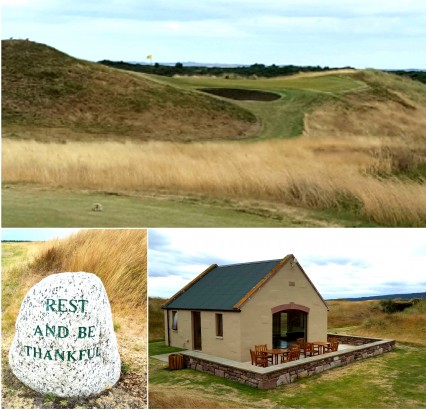 The only other course in Scotland known to cost £300 per person or more is Skibo Castle which has recently opened its doors to non-members with two visitor 4-ball rounds per day, Monday to Friday, in the summer months. However, in this case, the green fee includes hospitality on the course and lunch in the golf clubhouse. Given its location and the exclusive nature of the Carnegie Club based there, it will also probably include the sole use of the course.

Other 'exclusive' private clubs have opened their courses to non-members, but on more structured conditions, such as the Membership Experience at Archerfield and the One Time Only at Renaissance. Archerfield can date parts of its course to 1869 when 13 holes were laid out on the private estate and played by family, guests and household staff.

Apart from these four courses, there are now half a dozen Scottish courses with advertised green fees over £200. They include Kingsbarns, Muirfield, Royal Troon, Gleneagles, Carnoustie (Championship) and Prestwick. Apart from Kingsbarns, these courses range from £200 to £250, but they can be played for about half-price out of season. Kingsbarns costs £268 per round and, although it has discounts for local and Scottish residents, it has no winter fee rates, as it closes from November to March.

Surprisingly, St Andrews (Old Course) costs 'just' £190 per round, though arrangements to play the course in high season require considerable pre-planning. There are low season prices and other courses at St Andrews that can be played for a lot less. Some of these, such as the New Course, are just as historic. It is often said that Old Tom Morris designed the Old Course. This is not strictly true. He altered the 1st and 17th and made improvements and widened the course, but he inherited the design, whereas he designed the New Course from scratch. 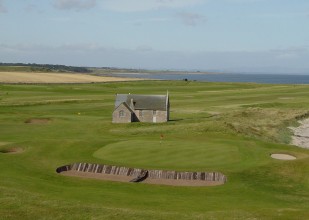 Of the other historic courses and clubs, Royal Aberdeen and Gullane (No 1) are the next most expensive, though as elsewhere there are alternative courses and low-season prices.  North Berwick, Cruden Bay, Dunbar, Panmure and Royal Burgess are all £100 or more per round in summer.

However, half of the courses on this website cost between £30 and £90. They include Golf House Club Elie, Scotscraig, Bruntsfield Links GS, Montrose (Medal), Monifieth (Medal), Crail (Balcomie), Fortrose and Rosemarkie, Leven, Burntisland Carnoustie (Burnside) and Lanark. You could play them all out-of-season for the price of one high-season round on the Ailsa.

These are not the cheapest prices by any means.

Golf has always been a people's game in Scotland and there are still historic courses run by local Councils who are focussed on encouraging 'healthful exercise' and not filling their coffers with 'siller'.

The online special green fees at the weekend for the North Inch course at Perth are £38 for a 2-ball, which is £19 per person (lunch not included). The weekday rate is only £32 for 2-ball and £55 for a 4-ball. Perth is where King James IV is first reported to have sourced golf clubs in 1502 from a local club-maker. It is therefore the oldest place dated golf location in the world.

You can play Musselburgh Old Links (once listed as the oldest golf course in the world by the Guinness Book of Records) for £15.30 on any week-day at any time of the year and it only costs an extra £1 at the week-ends. There are even hickory clubs for hire, if you want to go back 100 years in time, though you have to supply your own plus-fours. It is a small amount to play golf where Sir John Foulis played with Law Lords Gosford and Lyon in 1672.

The Kinghorn golf course is among the oldest documented courses found so far, with old-fashioned course features to match.  Currently listed as 5th oldest, it only costs £12 per round on week-days and £14 at week-ends. The original 9-hole course was designed by Old Tom Morris. (I kid you not).

Kinghorn Hole 16 with the Firth of Forth in background

(And of course you can play the short-hole course at Bruntsfield Links in Edinburgh, which dates back to 1695, for free.)

To suit all pockets is a English expression meaning having price levels to suit all budgets. It has nothing to do with the shape of the pockets.

Siller is a Scottish expression meaning currency derived from the old Scots pronunciation of silver.