There have been several theories about the origin of the Troon Clubs currently on display at the British Golf Museum in St Andrews. New evidence supports an 18th century dating for their manufacture.

The Troon clubs, comprising 2 irons and 6 woods, sometimes called the Adam Wood clubs, were actually found in Maister House in Hull in 1898. The details of the clubs and their discovery is outlined in The Troon Clubs Part I -The History.

The shape of the club-heads of the woods clearly matches silver trophy clubs that can be definitively dated to the middle of 18th century, as seen in the picture underneath.  The majority of experts who study and make replica clubs support this dating for the manufacture of the woods. 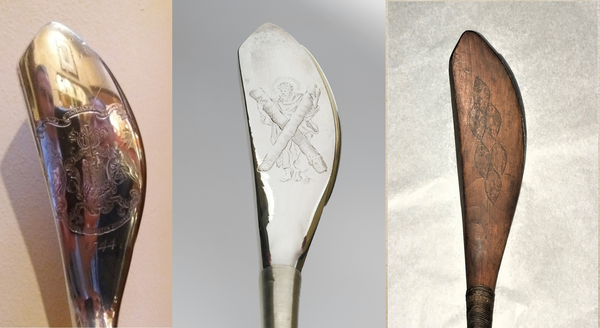 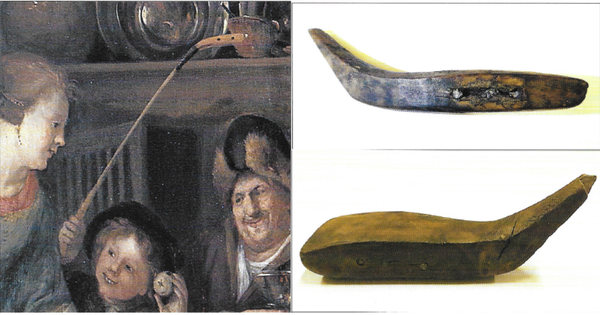 The London club-head is not in as good a condition as the Leiden one shown above, but is similar in shape and construction with lead weighting to the rear. It cannot be taken as proof that these clubs were in Britain at the time, but it is further evidence of this type of shape of colf/golf clubs. The fact that contemporary references describe clubs in the Netherlands as the "Schotse Kliek" strongly suggest this type of club was also in use in Scotland, and possibly that this is where the design, if not the manufacture, came from.

The construction of the Troon woods is sophisticated with a base plate and lead weights and fits an 18th century time frame (see picture below). 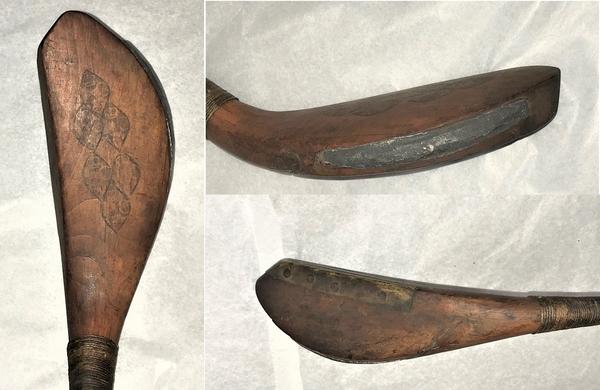 Troon wood from top, back and bottom, showing sophisticated shape and construction.

The original theory for the dates of the clubs posits that the Adams woods are from early 17th century. The theory argues that the mid-18th century silver clubs (shown above) are based on 100 year old designs. The theory also requires that wooden clubs remained completely unchanged over 150 years. The discovery of club-heads with square, different shapes with Scottish connections, render this theory doubly difficult to sustain and supports the 18th century date for the manufacture of the Adams woods.

There is a simple, parsimonious explanation for all the evidence, namely that the clubs are Jacobean; possibly belonging to one of the Jacobites who invaded in England in large numbers in 1745! This theory was well expressed in an on-line article by Gavin Bottrell.

The woods are therefore probably c 1745, but the two iron heads may be older with new shafts fitted at the same time. This tallies with the dates of the fire at Maister House (1743), after which they must have been hidden. It also fits the date of the newspaper (1741) found with them as well as with the style of other early clubs in existence, without great gaps in the timeline of their history.

The markings on the woods and the shafts of the irons include a star (see picture below). This was a known and prominent Jacobite symbol meaning the ascendancy of the Stuarts and/or referring to a star allegedly present during the birth of Bonnie Prince Charlie. It was usually on the reverse of glasses and was kissed by the Jacobites when toasting the "King over the Water". However, there is not example known of the symbol used in this way between two initials.

This raises the possibility that the clubs could have been the personal property of Bonnie Prince Charlie himself. If so, the assumption would be that the C stood for Prince Charlie and the I/J stood for his father James the Old Pretender, in whose name he was in Scotland. He could have been gifted a presentation set of clubs while he was in Edinburgh and taken them south and abandoned them. It is even possible that the irons had a previous royal connection to one of his ancestors and were re-shafted to be given in honour of his arrival to reclaim the British throne.  The Prince is known to have been a golfer in Italy, so this not as far fetched a theory as it may first appear. None-the-less, it is an leap of the imagination for which a large degree of faith is needed. 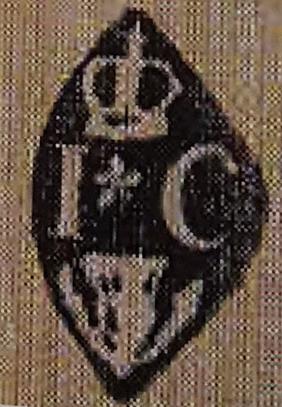 A word of caution needs to be made. Recent research has shown that the symbols (the letters and star)  on the woods and iron shafts were more widely used than believed last century. These symbols appear on other sporting trophies dating from late 17th century to middle of 18th century. The I * C looks identical to lettering on other general sporting trophies.

Though this is not fatal to the Jacobite theory, it fundamentally undermines any definitive ruling that the Troon clubs are unquestionably related to early Stuart Kings. J * C could be anybody whose first name began with a J and whose second name began with a C. The Crown and Thistle were used by merchants and other commoners, so they cannot definitely be ascribed to the Stuart Kings. None the less, the person would have been a serious Scottish patriot as the clubs are stamped with these symbols 44 times!

It is not exactly game, set and match, but it is certainly a myth with legs.