There are many free sights in Edinburgh for golfers who have visited all the usual attractions. Most can be visited on walks round the centre of Edinburgh.

Edinburgh is steeped in history and is the most popular tourist destination in Scotland. In the summer, tourists to the city centre outnumber the locals. They visit the Royal Mile, Edinburgh Castle, Holyroodhouse, Princes Street Gardens, Arthur's Seat, Greyfriars Bobby, the Scottish National Gallery, the Royal Botanic Gardens and various whisky centres.  However, few visit the early golf history in Edinburgh as anywhere else though there are as many golf-related historical places to visit in Edinburgh as anywhere else.

The Royal Mile runs from the Castle to Holyroodhouse. Most visitors will have walked down it and seen the Tron Kirk and St Giles Cathedral, but there are other sights to see. 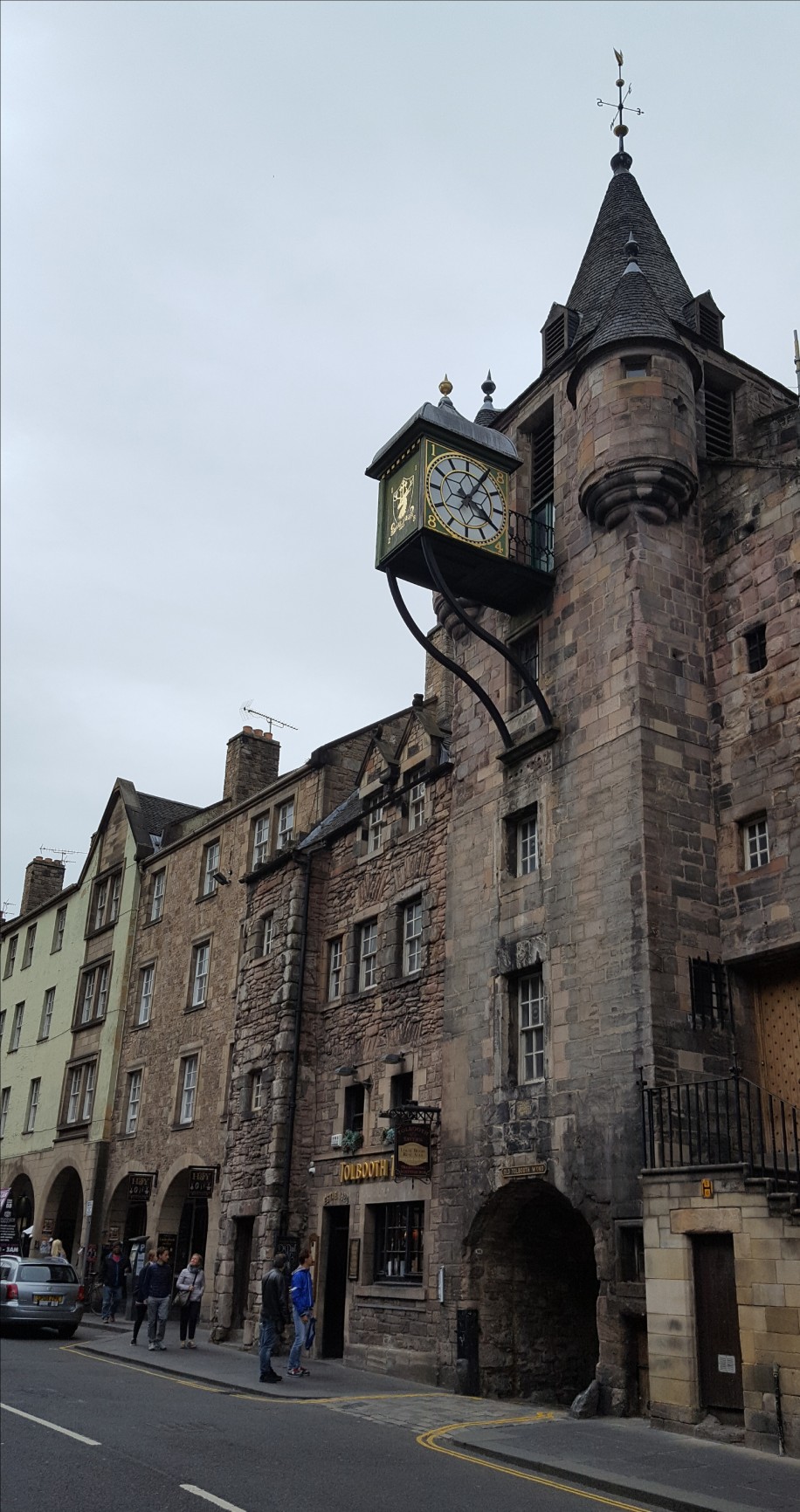 At the top of the Royal Mile, in the Lawnmarket, is James Court (1), which was built by James Brownhill, builder of Golfhall, the world's first golf clubhouse and catalyst for golf clubs everywhere. James Court is behind and beside Gladstone's Land and the Writers' Museum. Several famous people were tenants including David Hume and James Bowell, who entertained Dr Samuel Johnson there prior to their famous trip round Scotland. The building had one of the first tenants' associations, though half of it was rebuilt after a fire in 1857.

The Royal Mile has seen many famous pubs come and go. Borthwick Close, on the south side, was the site of Robert Biggar's pub. He was the second tenant in Golfhall and a 'founder' member of the Leith Golfers.

The World's End pub (2) marks the location of the Netherbow Gate in the Edinburgh City walls, where the golf-club maker Patrick Fyfe was 'keeper' of the Netherbow bell in the 16th century. The golfers who patronised him probably used Calton Hill (see below) which is just a short walk to the left. The brass plates in the road mark the outline of the city gate, which gave rise to the name of the pub, as beyond the walls was the wild west to the city residents, especially after dark.

Further on down on the left is the Canongate Tollbooth (3) built in 1591 and a pub since 1820. Because the Canongate was a separate burgh, it had its own trade associations and there is a famous reference to the dispute between the Canongate cordiners (shoemakers) and Leith cordiners and golf ball makers in 1552. This is one of the earliest references to golf. However, Cordiners' Hall itself was located near the Old College of the University of Edinburgh and no longer exists. 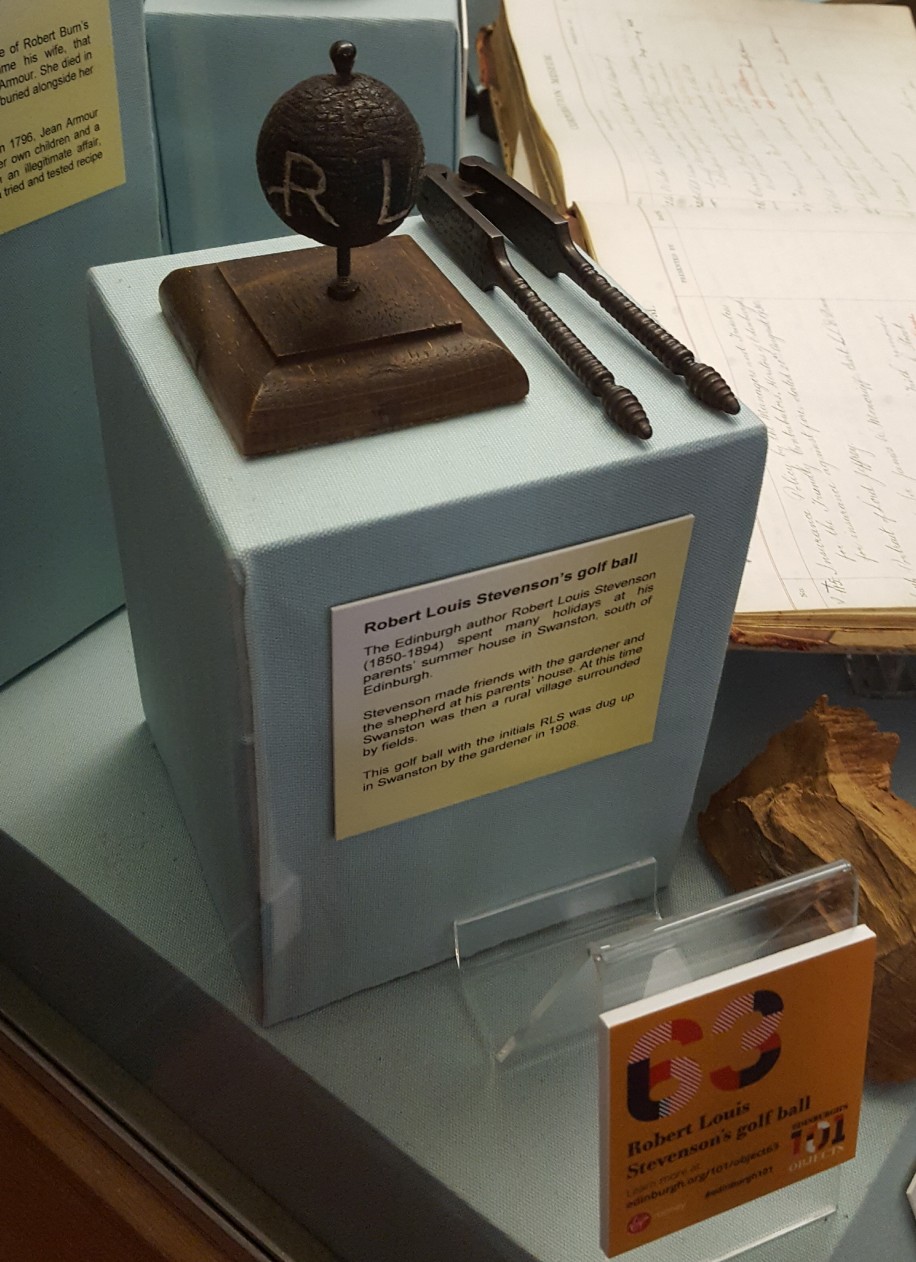 Near the Tollbooth is the Museum of Edinburgh, where you can see a golf-ball once owned by Robert Louis Stevenson (4), the famous author. It was dug up by the gardener in Swanston in 1908. The museum probably has more Scottish items than the international collection at the National Museum of Scotland. (The house where RLS was born is in Canonmills, almost opposite the east gate of the Royal Botanic Garden).

Directly opposite the Museum of Edinburgh is Canongate Kirkyard, where several famous Scots are buried, including Adam Smith (5) author of The Wealth of Nations and prophet of the middle-class prosperity that gave us golf. His only surviving home, Panmure House, is further down the Royal Mile, on the left.

One famous building that has not survived is Golfer's Land (6) owned by John Paterson, a famous golfer and ball-maker. It stood at 77 Canongate, but was demolished in the 1960s to make way for flats and a pub now called Kilderkin, which looks older on the inside than it does on the outside. Golfer's Land was reputedly bought with money that Paterson won in an 'international' golf match from 1681 and there is a commemorative plaque on the wall outside to the right of the pub.

Walk to Bruntsfield Links and The Golf Tavern (7) to (10)

The oldest golf course in Edinburgh is Bruntsfield Links, dating to 1695 at least. To access it in the 17th century, golfers had to walk down to the Grassmarket, past the White Hart pub (cellar dating to 1516, building to 1740). The walk to Bruntsfield Links (7) is still possible today by taking the Vennel passage at the south-west corner of the Grassmarket. The Grassmarket was the site of public executions and the Covenanters' Memorial marks where the gibbet used to be. Vennel is alongside the remnants of the Flodden Wall and is worth a visit in its own right. At the top of Vennel, after crossing Lauriston Place, walk past the old Royal Infirmary to the Meadows. Bruntsfield Links is on the far side to the right and takes about 25 mins from the Royal Mile.

Another less well-known club-maker was Thomas Carruthers, who invented the modern hosel in 1891. He was a former champion athlete who bought a dairy shop after an injury cut short his sporting career. He also learnt to play golf and make golf-clubs, probably taught by Frank Dolman.

All the clubmakers' premises in Wrights House were demolished in the 20th century but two still exist round the corner. The original dairy shop of Tom Carruthers at 5 Gillespie Place is now a newsagent and the workshop where William Cunningham made golf-clubs at 35 Leven Street from 1911 to 1934 is still there (8). Tom Carruthers' son moved to the Braid Hills where the family bought the Golfer's Tryst (see below).

Nowadays, there is only a short-hole course on Bruntsfield links. During the summer it has 36 holes and in the winter there are 9 holes. Playing Bruntsfield Links (9) is completely free and a great way to spend a couple of hours in Edinburgh with a view of the castle and Arthur's Seat. Clubs and balls can be hired from the Golf Tavern. 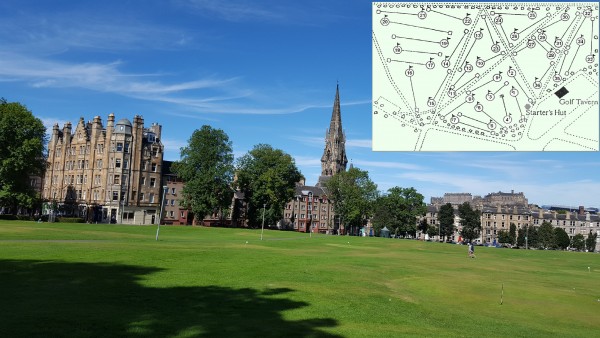 The Golf Tavern (10) is the oldest golf clubhouse in the world and, since the recent demise of Mrs Forman's at Musselburgh, it is also now the oldest golf pub as well. It started life as two houses 30 and 31 Wright's Houses and was used by the Bruntsfield Links Golfing Society as their clubhouse from 1852. It was remodelled into a pub in 1898 by Robert Macfarlane Cameron, a well-known Edinburgh pub architect. He called it Ye Olde Golf Tavern, though it has never been known by this name. It took over the old Golfhall business, when all the Bruntsfield clubs still playing there moved in.

Calton Hill once had a golf course. Its existence had been known for some time, but not its location. Recently yours truly found maps showing that the course was beside the National Monument on the hill above the old Royal High School. Calton Hill (11) provides great views of the city and is easy accessed from the east end of Princes Street. There is also the old City Observatory, Nelson's Column and James Craig's House on the summit. Below the hill is St Ninian's Row, where an early golf club-maker, John Elder, came to work in 1676. 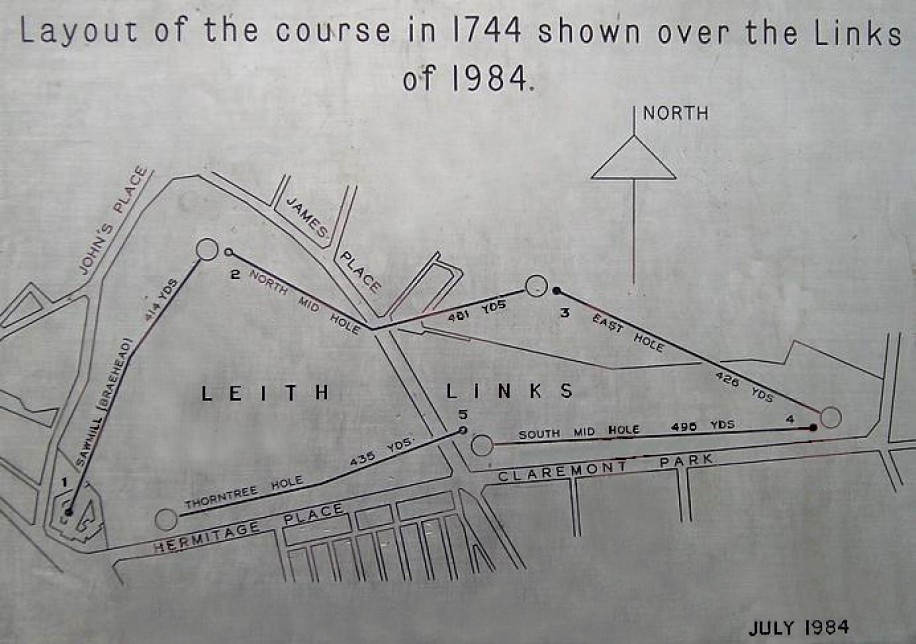 Plaque on cairn on Leith Links

Leith Links (13) is the most important golf site in Edinburgh. Until 1920, Leith was a separate burgh, but under the jurisdiction of Edinburgh. Leith was a more rough and ready place. None-the-less, it was where golfers played regularly and where several famous golf matches took place in the 17th and 18th century.

In 1744, the Leith Golfers were the first to stage a public golf competition, for which the City of Edinburgh gave a silver arrow as a prize. A condition of the donation was that the rules of golf were properly documented, which was the formal creation of the game. A cairn on the west of Leith Links commemorates this event. If you look to the south of the cairn, you will see the former Leith Academy building, now converted into flats, which was the site of the Golf House, built by the Leith Golfers in 1768 with some ceremony.

The most historic pub in Leith is the King's Wark named after its association to King James VI in 1613. It is in the centre of Leith, on the way to Leith port where the former Royal Yacht Britannia is berthed. There is a regular bus service (No 22) to Leith from the east end of Princes Street. 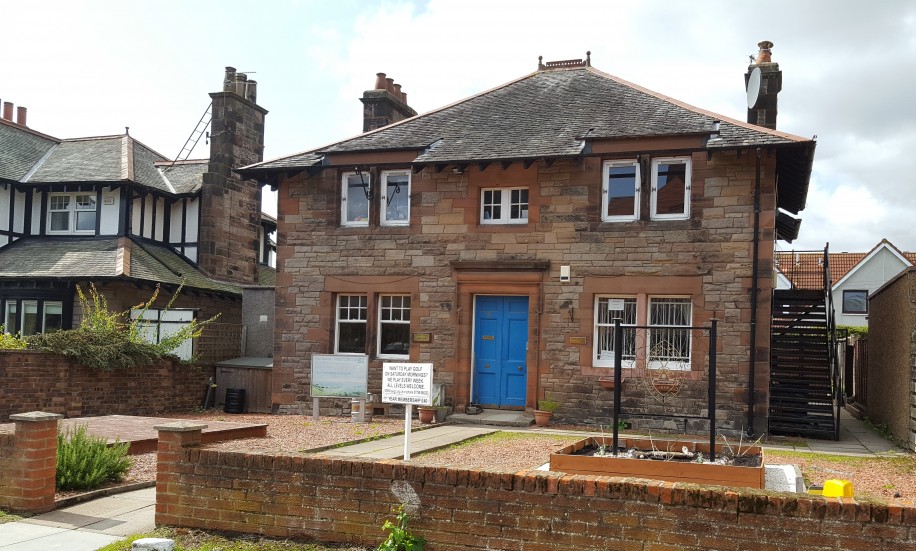 In 1899, for reasons of safety and lack of space, links golf moved from Bruntsfield to a new golf course on the Braid Hills. Most of the Bruntsfield based clubs moved at the same time. The Golfer's Tryst (14) was built by William Frier, a golf club-maker and rented out to the Warrender Golf Club. Shortly afterwards, there was a serious fire and the premises had to be rebuilt. The building was later bought by Tom Carruthers and used by his son to carry on the family club-making business. In 1946, it was bought by the Braids United trust. It has been used as their clubhouse ever since and can be seen today opposite the entrance to the Braids golf course. Next door is the old Golfer's Rest, built at the same time as the Golfer's Tryst, but which is now a private residence.

You can walk round the Braid Hills including the course (15) which has several pathways avoiding the golfers. The Hills have magnificent views of Edinburgh and its surrounds. (Click Braid-Hill-course-2018-1.mp4 for panorama).

Apart from the 18-hole Braid Hills course, which has been revamped, there is the Wee Braids golf course of 9 holes. The first tee is beside the Braid Hills golf centre and driving range at the far end of the main Braids course. For refreshments, the golf centre has an excellent café or there is the Canny Man's pub nearby in Morningside.

It is probably simplest to get a taxi to Braid Hills, but there are many buses back to the city centre from Morningside, which is a downhill walk.

The Royal Burgess (1735) and the Bruntsfield Links (1761) golfing societies are both now located at Barnton in the west of Edinburgh, though accessed from opposite sides of their respective courses. It is pure coincidence that they ended up side-by-side, which is how they had started all these many years ago. Both are open to visitors to play. The BLGS has a public licence which allows non-members to have lunch in the visitors' lounge. You can often play the BLGS course at short notice during the week.

Don't forget Musselburgh! It is only a few miles outside Edinburgh.