The Royal Burgess Golfing Society of Edinburgh traces its origins back to 1735, the foundation date first recorded in the Edinburgh Almanac from 1834. The Burgess club are mentioned in earlier Almanacs but without the foundation date. This date makes Burgess the oldest organised society playing golf. They played over Bruntsfield Links, in the shadow of Edinburgh Castle, for the first hundred years of their existence.

The first known minutes start in 1773, and the extract below is taken from Burgess Chronicles, reproduced in Golf: A Royal and Ancient Game. It is now clear that the club had been in existence since shortly after the construction of Golfhall at Bruntsfield Links but there are other reasons to support 1735 as the inception date of the society.

At Bruntsfield Links, near Edinburgh
the eighth day of April
one thousand seven hundred and seventy three

We Daniel Ker, Alexander Milne, and Charles Rhind, three of the members of the Society of Golfers in and about Edinburgh, taking into our consideration the present state of the said Society, and that most of the old members are either dead or have neglected to attend the meetings of the same, and we being inclined that the said Society should be continued, - Have therefore resolved to admit and receive the persons after named to be members, and who are to be subject and liable to the rules and regulations hereafter insert, in place of the old rules of the said Society, and to such other rules as may be regularly enacted in time coming.

who all agreed and subscribed the rules hereto annexed.

The first-mentioned Orlando Hart, a shoemaker and Deacon of the Trades in Edinburgh became the first recorded captain, with Daniel Kerr, a goldsmith, as his Treasurer and Charles Rhind, a merchant, as his Secretary. A uniform was adopted in 1790, used to distinguish the golfers 'to give warning to pedestrians in such a way as to avoid injury.'

Sometime post 1745, there was a schism over the Jacobite vs Hanovarian sentiments in the club, and the group who would become the Bruntsfield Links Golfing Society operated independently thereafter. The traditional date given is 1761. 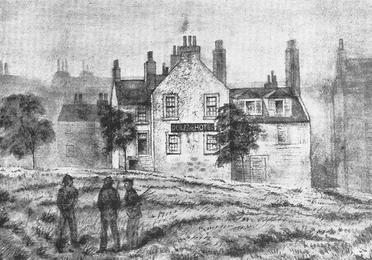 The Burgess used an establishment called Golfhall, (depicted in a painting by Paul Sandby) as their early clubhouse, until 1792.  Then for at least a decade, they rented a room in 'Captain Rollo's house', and used pubs in Edinburgh for hospitality and Council meetings, before moving back to the old club-house, now called the 'Golf House Tavern' and later seen as 'Golf Hotel' in pictures. Confusingly, it is also referred to as the 'Golf Tavern' in the Club history.

The Golf House Tavern/Golf Hotel was  demolished in the middle of the 20th century. Recently, photographs of it were discovered in Edinburgh City Library.

On 2 July 1800 the Edinburgh Town Council granted to the Burgess Society a Seal of Cause whereby it became a legal corporation with power to hold property, make its own by-laws and regulations and promote the game of golf amongst its members. Upon the granting of the Seal of Cause, the Society became known as the Edinburgh Burgess Golfing Society and changed its motto from "Long and Far" to the more common golfing motto of the day "Far and Sure".

A few years after the grant of the Seal, in 1807, the club was split in two over a row about the Stymie as outlined in the Rules of Golf, though this time there was a reconciliation. 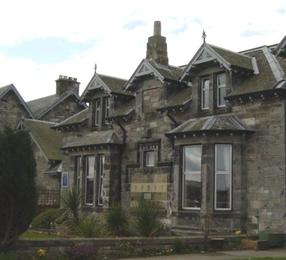 By the early 19th Century, Bruntsfield Links became increasingly congested with people and traffic. The Burgess members decided to move to Musselburgh in 1874 where they shared the nine-hole course with The Honourable Company, Bruntsfield Links GS and the (Royal) Musselburgh GC. There were about 100 Burgess members at this time and they occupied 10 Links Place (now 10 Balcarres Road below) for several years.

Within 20 years, with the popularity of golf and the competition from the racing, Musselburgh was felt to be overcrowded. In 1894, the Burgess Society bought land from the Maitland family in Barnton, Edinburgh. The course was laid out by Tom Morris and was formally opened on 3 May 1895. The present clubhouse was originally designed by RM Cameron and completed in May 1897 and was extended in 2002 to provide better ladies facilities.

By a Royal Edict dated 30 September 1929 of His Royal Highness King George V, the Burgess changed their name to The Royal Burgess Golfing Society of Edinburgh.

The official website of the Royal Burgess Golfing Society gives more details of the history and terms of play. Visitors are welcomed in off-peak times.

Important new information on the origins of Royal Burgess at Bruntsfield Links have just been published in a new book in 2017. Click here for details and how to order it.