On May 14, 1754, twenty-two 'Noblemen and Gentlemen' contributed to a silver club to be played for annually over the Links of St Andrews. The first winner was Baillie William Landale, a St Andrews' merchant, who became Captain for the year. The competition was initially open to all golfers, as had been that of the Leith golfers ten years previously. The Leith golfers were invited to attend and their rules were adopted with a small change to Rule 5. Thus began the foremost club in both Scottish golf history and world golf in general.

The first competition was decided by the winner of the greatest number of holes, which was a complicated calculation and, by 1759, this became the lowest number of strokes, as is customary today. In 1755, there was a triple way play off, when Thomas Boswell, WS, beat the Hon James Leslie and Baillie William Landale (the first winner from 1754).  Thomas Boswell would go on to win the Leith competition in 1758 and become their Captain, as well as making written amendments to the Leith Rules 5 and 13. In 1757 and 1760 there were no competition at St Andrews, so it was claerly not yet an established event. 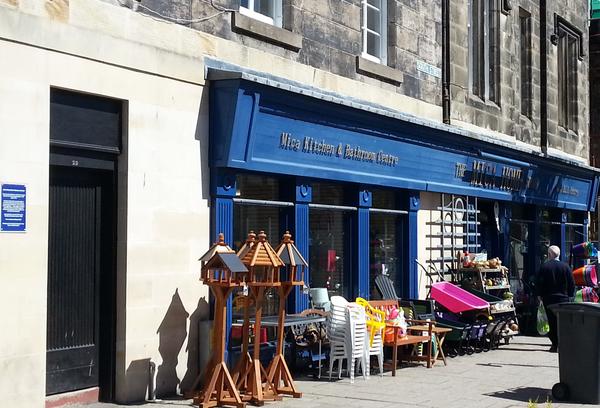 On 4th May, 1766, the Society initiated regular play, with a decision to meet fortnightly at 11 am at the Golf House, and to dine after the round at Bailie Glass's Inn, for which they would each pay a Shilling, 'the absent as well as the present'. (There were twenty shillings to a Scottish pound.) The location of the 'Golf House' has never been established, but Baillie Glass's Inn is marked by a plaque at the east end of South Street. Like other clubs, they also used multiple taverns.

On 28th May, 1773 the St Andrews golfers limited their annual competition to members of their own club, and those of the 'Leith Society', known today as The Honourable Company of Edinburgh Golfers. It marks a close association that these two clubs have had to this day. For example, William St Clair of Roslin, who organised the creation of eighteen holes at St Andrews in 1764, also laid the foundation stone for the Leith clubhouse in 1768. He was also Captain of both Leith and St Andrews clubs multiple times.

One of the great traditions of the R&A is to retain the fiction of a competition to select their captain. The Captain is selected and then entered in a competition in which he is the sole competitor and is declared the winner after his first drive from the first tee. The caddie who collects the ball is rewarded with a sovereign. This is called 'playing in'. According to legend, all Captains have been played in this way, excepting only General Eisenhower in 1946 who refused to play from the first tee, in the light of the safety issues created by the enormous crowd that had gathered in his honour.

According to the Club Minutes on 7th September 1810, the Society authorised the Secretary 'to employ tradesman to repair the Golfers' Bridge on the Links, which is at present almost impassable, and to pay the expense thereof'. This bridge is now called the Swilken Bridge and can be seen on the 1820 map by John Wood to the north of the old 'Swilkin' Bridge, which his now the bridge under the road on the Old Station Road.

In 1834, King William IV agreed to become the Patron of the Club and the Society of St Andrews Golfers became The Royal and Ancient Golf Club of St Andrews also know as the R&A. This was the second Royal accolade after Royal Perth Golf Club which had received its Royal title the year before. 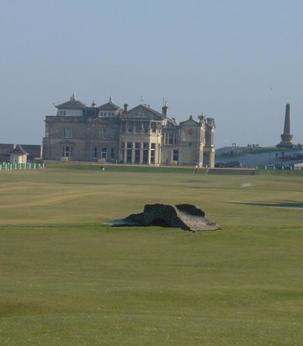 Glass's Inn was renamed the Black Bull Inn and, until they built their own clubhouse facilities, the St Andrews golfers used it alternately with the Cross Keys Hotel, run by Mrs Anderson (c1835) and later by Mr Hastie (c1853). One of the 1843 bills for the Cross Keys still exists. The hotel building itself is now a private house, but the old bar of the hotel, dating back to 1858, is still next door.

The R&A clubhouse was originally built in 1854, but has been expanded several times since.

Before building their own clubhouse, the R&A had made use of the Union Parlour, built by the Union Club. In 1854, the Society began a merger with the Union Club of which Sir Hugh Lyon Playfair, who had recently returned from India, was a founding member. Sir Hugh was instrumental in developing the clubhouse and went on to be Captain of the R&A 1856-57 and is credited with the implementation of the double holes in the greens on the Old Course, and the use of different coloured flags for the out-and-in, which greatly assisted the flow of play and created a true 18 hole golf course.

In 1897, the Royal and Ancient were given sole control of the Rules of Golf Committee, a job which they have discharged for all areas outside of USA and Mexico ever since.

Alone among the oldest ten clubs, the R&A have always played over the same course, the St Andrews Old Course. Although they do not own their own course(s), the R&A built the New Course in 1895, and paid for the maintenance of both the Old and New courses until the early 1950s, when they handed these over to the St Andrews Links Trust. This was part of the very complicated and protracted arrangements that were reached on the rights of playing the courses for Club members and local residents alike. This included legal challenges and several Acts of Parliament, because the land was common land for the benefit of the populace in general, whose conflicting interests had to be resolved.

The Royal and Ancient voted to admit women members in 2014.