Blackheath says that it was 'instituted' in 1608. Though the basis for date is not known, it is possibly derived from assumptions about golf play by King James VI/I at Blackheath and reported incidents of his son Prince Henry, playing golf, which were assumed to have taken place in Greenwich, though this is now considered unlikely.  Even if golf had been played at Blackheath in Stuart times, that would not constitute the formation of a golf club, and many Scottish locations would have an equal and prior claim and all the dates would need to be adjusted.

The first definite evidence of club activity is a silver club presented by Henry Foot for a competition in 1766 and played for ever since. This date still makes Royal Blackheath the oldest English golf club and the oldest golf club outside Scotland. Blackheath mention that other items in their possession suggest a date of 1745 may have been the inauguration of the Club, but no conclusive evidence of a prior date exists at present.

The Royal Blackheath have another golf club in their collection, called a putter. The putter was presented to Royal Blackheath with an account of 'an original feat of golfing', which took place at David Garrick's villa following a game of golf on Molesey Hurst in 1758. In his 'History of Golf', Robert Browning speculates that the 'Home's golf putter', as it is called, is the club used in this golf trick shot. There is, however, no known connection between golf at Molesey Hurst and Blackheath, though it cannot be ruled out. 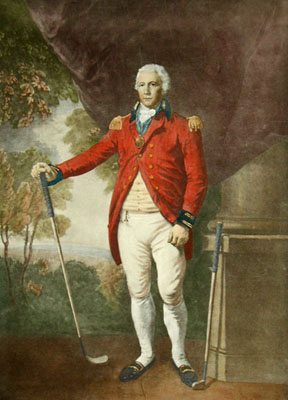 Until recently, Blackheath possessed a very famous picture of Henry Callender shown here. He was a prominent English member of the club, secretary for 17 years and Captain three times. In the picture he is depicted in the uniform of a Captain General of the Blackheath Society. This style of uniform is still worn on formal occasions. The title of Captain General is an honorary one bestowed upon a member of good standing. The two golf clubs illustrated were said to be in the possession of the Club. In 2016, the Club sold the picture and one of the clubs to fund the purchase of their Eltham golf course.

The first known meeting place of the Blackheath Club was the Chocolate House, opened in 1702, for which they have a 1787 receipt.  They then transferred their base to the Green Man Hotel or Bowling Green House pub (now demolished) on the London side of the Heath. Subsequently, they used 93 Blackheath Hill (1865-1909) as their clubhouse and after that the Heath House (1909-1924), which they retained for a period even after they had moved to Eltham in 1923.

From early days, there were various 'club-makers' at Blackheath, really club professionals.  The first was Donaldson. This may be Andrew Donaldson trained by Thomas Comb at Bruntsfield. The quality of his craftsmanship had been brought into question by the Royal Company of Archers at Bruntsfield, but Blackheath kept him on following an accident in 1806 and when he died in 1815, the Club paid for his funeral.

In 1851, Willie Dunn Senior arrived from North Berwick and stayed until 1865, during which time he was involved in laying out a new course at Pau, at the Club's request.  His two sons, the younger of whom was born at Blackheath, went on to become professionals at other English clubs namely Wimbledon Common and Westward Ho!.

Royal Blackheath GC was prominent in promoting golf and supporting other early clubs in England and abroad, including Calcutta, Bombay and New South Wales, with whom they had links and exchanged salutations and medals.

An important member of Blackheath was George Glennie, a civil engineer from Glasgow, who won many medals at Blackheath and served as their Captain in 1862 and 1863, as well as Secretary and Treasurer from 1868 to his death in 1886. Most notably, he won the first national golf 'tournament' at St Andrews in 1857 in foursome play with Lt Stewart representing Blackheath. 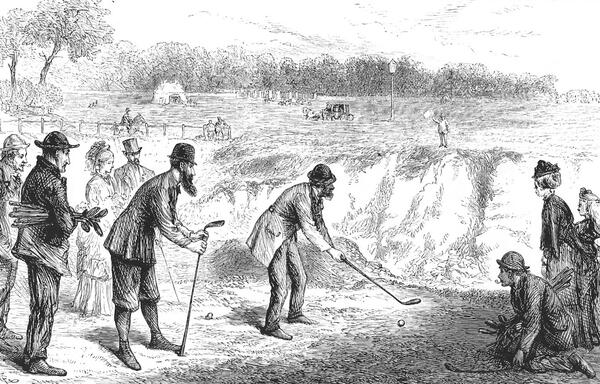 Blackheath often featured in the press. The print above shows golf on the 'Heath by the Victorian artist, F Gilbert. This engraving is featured in Robert Clark's book with a florid account of a 'Medal Day at Blackheath', first printed in the June 1874 edition of the Daily News. The Daily News reported that the caddies were 'apparently costermongers out of work' and that there was a 'scout' posted with a red flag to warn passers by of the presence of the golfers, who is just visible in the background to the right of centre.

The photograph below shows today's Heath, which is larger than Bruntsfield or Leith Links, looking south towards Blackheath.

The Move to Eltham

In early years, the Blackheath course was five holes, extended to seven holes in 1844. At the end of the 19th century, when 18 holes became the norm, the course was unable to expand on the Heath.  In addition, playing three rounds of the seven holes meant driving across the main London to Kent A2 road on six occasions. This was clearly unsafe. So, in 1923, the Royal Blackheath Golf Club arranged a merger with the Eltham Golf Club, formed in 1892, and moved to their course near Eltham Palace.

The present clubhouse, which the Royal Blackheath inherited, was completed in 1664 for Sir John Shaw. He was a wealthy vintner, who supported King Charles II during his exile years and who 'spared no expense in employing the most talented craftsman of the day in the construction of this fine building.'

The Royal Blackheath Golf Club welcome visitors and possesses a substantial golf museum in the clubhouse, for which group tours can be arranged, for a small entrance fee.

Local accommodation overlooking the 'Heath is available at the Clarendon Hotel, which comprises a row of Georgian eighteenth century town-houses.