Stuarts at Greenwich Park and Blackheath 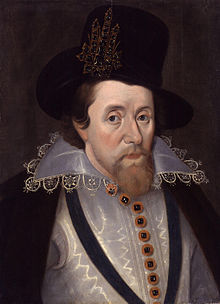 When James VI of Scotland travelled south to become King James I of England and Wales in 1603, he was accompanied by hundreds of Scottish courtiers. It is more than likely that several were golfers and would have taken their golf clubs with them.

The King was certainly a golfer with many documented references to golf supplies by his Royal bow-maker and club-maker William Mayne.

The Royal Blackheath Golf Club sometimes say that that they were 'instituted' in 1608, though there is currently no documentary evidence to support this.  The claim is believed to date from the middle of the 19th century, when they got into an argument on foundation dates in the Edinburgh Almanacs with other old Edinburgh golf clubs, as outlined in Bruntsfield Links - Home of Club Golf. The Royal Blackheath initially claimed a date 'prior to 1745', but later amended this to 'instituted 1608'. This is presumed to be based on the notion that King James and his courtiers played golf in the vicinity of Greenwich Palace. However, the King himself was not based there as he had other establishments in London and in the country, such as Royston in Hertfordshire (see below).

King James VI's eldest son was Frederick Henry Stuart, known as Henry. Henry was nine years old when he accompanied his father to London, on the accession to the English throne in 1603, while his second son, Charles, did not, as he was too 'sickly'. They both played golf. Henry was an acknowledged wit and very popular at court and with the nation, but sadly died in 1612, aged 18, which is how his younger brother succeeded to the throne as Charles I.

In 1606, the French Ambassador reported that Prince Henry played a Scottish game very like jeu de maille, which is almost certainly golf. Recent research has shown that this event took place at Richmond Palace in the south west of London, where the teenage Prince Henry had his own palace (lucky him!).

Another anecdote involving Henry was dated to 'before 1608'. Henry was tutored by Adam Newton, who later became his adviser. He attended Magdalen College, Oxford in 1605. Sir Adam Newton built Charlton House, one mile east of Greenwich in 1607-1612, where he lived after Henry's death until his own demise in 1629. It is recorded that at some time during his education, Henry almost struck his tutor with a golf club.

This anecdote was one of many recounted by a servant who had been with the Prince since he was three and recorded in a manuscript commissioned by one of King James VI/I's courtiers, Lord Lumley. These Anecdotes were published in 1817 by Isaac D'Israeli, father of the British Prime Minister, Benjamin Disraeli, in his third volume of Curiosities of Literature. D'Isreali states that Lord Lumley died in April 1609, when the MS was purchased for Henry, so the anecdotes must relate to events that occurred prior to 1608. There was a reprint of the Curiosities about a decade before the date of 1608 was apparently claimed by the RBGS. This is therefore likely to be the source of the date adopted by the Royal Blackheath Golf Club, who have assumed the golf event was at Greenwich, though it was more likely to have been at Richmond or elsewhere.

James I and Charles I

James VI/I was definitely in Greenwich in 1613, because that was the year Queen Anne accidentally shot his dog. As a result, James lost his temper to such an extent that he was forced to make up to her by building her what became known as Queen Anne’s house. At least, that is what Sir Dudley Carleton thought, writing in 1613 :

The queen shooting a deer mistook her mark and killed Jewel, the King's most special and favourite hound; at which he stormed exceedingly awhile; but after he knew who did it he was soon pacified and with much kindness wished her not to be troubled with it for he should love her never the worse; and the next day sent her a diamond worth £2,000 as a legacy from his dead dog....The Queen by her late pacification hath gained Greenwich.

The Queen's House was designed by the architect Inigo Jones. Building had been going on for three years when Queen Anne died in 1619 and the house was later given to Henrietta Maria, who married the future King Charles I, James and Anne's son. Both Charles and his Queen enjoyed spending time at Greenwich.

On Wednesday His Majesty went to Greenwich with the Queen. They will both stay there at least six weeks to enjoy the pleasures of the chase, and the Queen to see the completion of a special erection of hers which is already far advanced.

So golf at Greenwich or nearby Blackheath is possible during the Stuart's time, when King James or Prince Henry or King Charles were visiting their wives or mothers.  It is just that there is currently no documentary evidence at all to support the claim and it remains supposition. It should also be noted that there are other Stuart palaces more associated with sport such as Hampton Court Palace, which had a tennis court;  Richmond, where Henry Stuart played golf and King Charles I established a deer park; and, especially, Royston, where James VI/I built a hunting lodge and where golf is known to have been played in 1624.

The first documented golf course in London was at Molesey Hurst in 1758.

There is a small, badly maintained, putting ground in Greenwich Park beside the tennis courts, which thus represents one of the oldest golfing grounds outside Scotland.

On his restoration to the British throne in 1660, King Charles II, son of Charles I, was a player of Jeu de Maile, popular in France, where he had been in exile. Two Maile courts were built near his palace in London, on the streets known today as Pall Mall (pronounced Pell Mell) and The Mall (pronounced Mal, not Maul). It would be two centuries before another British Monarch took a serious interest in golf.