Fraserburgh Golf Club club suffered a ‘disastrous’ fire in 2004 when the clubhouse and its records were totally destroyed. A new clubhouse was opened in 2006 by Alex Salmond, First Minister of Scotland and work was undertaken to replace the club records. During this search, a document titled Fraserburgh Golf Regulations and Minutes 1777-1786 was found in the National Library of Scotland showing the Club’s older origins.

Fraserburgh Hole 1 and 18 with new clubhouse in middle distance.

Until this discovery, there was no awareness of golf club activity prior to 1881, although golf at Fraserburgh was known at the time to have begun much earlier.

The document was listed among the Fettercairn Papers Acc 4796  deposited in 1969 at the National Library of Scotland. The minutes of the Fraserburgh Golf Club begin on 14th April 1777. They list a membership consisting of nineteen of the most prominent landed gentry, who all paid 6 shillings subscription. 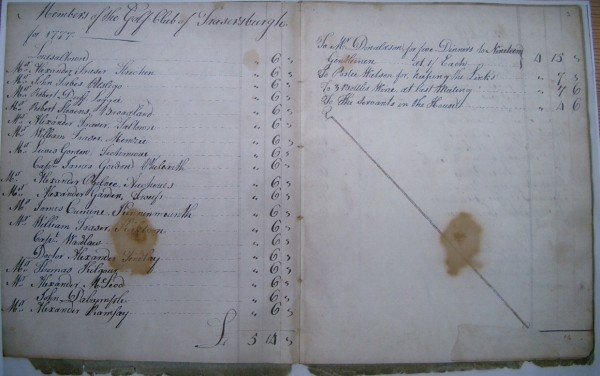 There are also notices in the Aberdeen Journal including one calling a meeting of the Buchan Golf Club at Fraserburgh for 20th April 1779 and the Fraserburgh Golf Club on 19th July 1780.

In the 19th century, there is evidence for challenge matches against local rivals Inverallochy / Cairnbulg and inter-club matches in the 1850s are documented between Fraserburgh and Peterhead founded in 1841.

However, in 1881, when the Club was formally instituted, there was no knowledge of these club events and as late as 2004, the Golfer’s Handbook showed 1881 as the club’s foundation, which explains why Fraserburgh has not appeared previously in the annals of 18th century golf clubs.

The original course was nine holes played on the "public commonty" (Fraserburgh Links) but this become congested, with danger to the public and constant interruption the Club.  In 1891, thanks to the generosity of Lord Saltoun, the Club moved approximately half a mile south to its present location at Philorth Links.

The course was redesigned in 1922 by James Braid, five times Open Champion, and much of his design remains to this day.

Fraserburgh Holes 4 and 5, from third tee.