The first 'General Meeting' of the Golf Club at Aberdeen was on Saturday 2nd September 1780, for which a notice was placed in the Aberdeen Journal of 28 August 1780 by the Secretary Alexander Dauney. It was held at Masson's in Queen Street.  The members were notified to attend 'early in the Forenoon' with 'Dinner on the Table at Three o'Clock.' They were also requested to follow the new golf course which had been 'cut by Appointment of the Club' in order to avoid 'any disagreeable Interferences.' Two month's later, with the notice of the meeting on 4th November, Dauney advised the members that the winter golf meetings would be the first Saturday of each month, 'to save Repetition of Advertisements' and of course the related costs. In 1781, the club was styled the Aberdeen Golf Club in newspaper notices.

Alexander Dauney, who was a doctor, was clearly a man with an eye for detail, as this was a level of precision absent from other club notices.  On the formal inauguration of the club in 1815, Dr Dawney donated a ballot box to the club, inscribed with the date of 1780 as well as 'Yea' and 'Nay' over the holes into which balls for or against membership were dropped.  Admission to the club was by ballot and all applications had to be 'on the table' for three months. Black Ball admission was common to clubs at this time and many still have their ballot boxes including R&A and Bruntsfield Links GS, while Crail is known to have lost its original boxes.

For the first hundred years the club played on the Queen's Links and Broad Hill, to the south of today's Kings Links course. The Aberdeen Links boasts the first reference in Scotland to the golf hole, described in more detail in the history of early golf in Aberdeen. 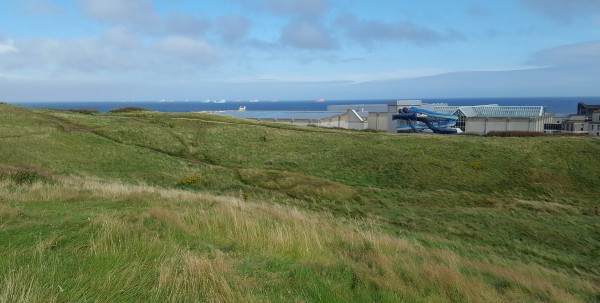 Within five months of laying out the new course, it suffered vandalism when some of the golf 'stones' were smashed and the Club offered a reward of three guineas (£3 and 3 shillings) to be paid anonymously on the conviction of the offenders.

NOTICE from the GOLF CLUB

Some malicious Person or Persons, having, within the late Fortnight, at different Times, dug up and destroyed some of the Stones lately placed in the South End of the Aberdeen Links, for Golf holes: These are offering a Reward of THREE GUINEAS to any Person who will discover those concerned in the above Trespass, to be paid to the informer by the Secretary of the Golf Club, on the Conviction of the Offenders.  The Informer's name to be concealed, if desired . By Order of the Club, ALEXr DAUNEY, Sec

The stones were either boundary markers for the course or markers for the golf holes, which we would recognise today as tee markers.  At this time, golfers tee'd off from within a few club lengths of the last hole and the tee did not become a separate area until 1875 at St Andrews. They were probably inspired by milestones or boundry stones, some of which are still to be found on golf courses, such as St Andrews and Earlsferry.

The club has rules dating to 1783, making them the fourth oldest club known to have issued a set of golf rules. These were called 'Laws of Golf to be Observed by the Society of Golfers at Aberdeen, 1783.' Because of this some believe they called themselves the Society of Golfers at Aberdeen, though this may well not have been the case. These extensive 23 rules had a note on golf etiquette and first introduced 'the five minute rule' on searching for golf ball. Law XII of the Aberdonian 'Laws of Golf' said

The Part whose Ball is amissing shall be allowed Five Minutes to search for it, after coming to the Spot where the Ball appeared to drop.

One of the early known members was Alexander Makenzie of Belmaduthy, who had gone to university at Aberdeen.

On 1st June 1815, on the evening of the Battle of Waterloo, the Aberdeen Golf Club was formally instituted. The first known Captain was William Black, who would later be a member at Blackheath when he moved south. In 1903 His Majesty King Edward VII conferred the Royal title on the club, though Royal Aberdeen had been using the 'royal' title for some years between 1875 and 1881, unaware of the necessity of Court paperwork, on the basis of the patronage and support of Prince Leopold, a younger son of Queen Victoria. They were not the only golf club to commit this 'faut pas', as Royal Blackheath recently found out.

After briefly adopting a green uniform in 1827, the club changed to scarlet by popular demand, which they still retain. They now met at the Humphrey Hotel at the corner of Castle Street and King Street (and still the site of a pub), using Alexander Munro's shop on King Street as a clubhouse, before building their own near the links end of Constitution Street.

By 1852, the Aberdeen links course was seven holes and competitions were two rounds or 14 holes. This was extended in stages and in 1876 an 18-hole golf course was created. However the links were getting crowded, especially after the formation of the Bon Accord golf club in 1872, so in 1888 the club moved to Balgownie at Bridge of Don.

The Balgownie course was originally designed by the Archie and Robert Simpson of Carnoustie and in 1925 it was given 'cosmetic refinements by James Braid. There is now a second, shorter 18 hole course, the Silverburn, situated beside the Aberdeen Ladies Golf Club clubhouse.

A picture of the ballot box and how to play there are available on the Royal Aberdeen Golf Club website.