Cruden Bay, in Aberdeenshire on the north east coast of Scotland, was originally known as Invercruden. The village was renamed in 1924. Port Erroll is the older part of the village of Cruden Bay to the north of the present course.

To the north of the course are the cliff-top ruins of Slains Castle. Built in 1597 the castle was the ancestral home of the earls of Erroll. When Dr Samuel Johnson and James Boswell stayed there on the night of 24th August 1773, Boswell recording that Johnston thought the prospect "the noblest he had ever seen." It is said that the building gave Bram Stoker the inspiration for Count Dracula's castle, while staying at nearby Cruden Bay in 1895. 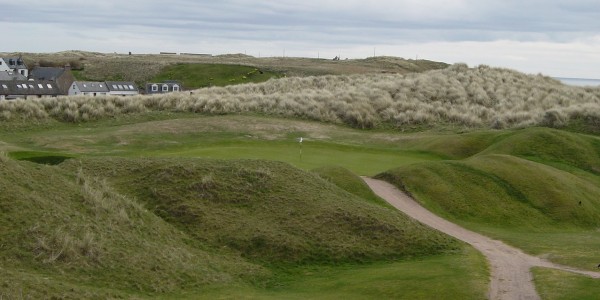 In 1899, the Great North of Scotland Railway Company (GNER) laid out the Cruden Bay golf course, designed by Old Tom Morris, with assistance from Archie Simpson, and extended playing privileges to local residents who were called the Port Erroll Golf Club. The Cruden Bay Hotel was built at the same time by the GNER and the hotel was connected to the railway station by an electric tramway.

However, there is evidence of an earlier Cruden Bay golf club, in the form of a ballot box inscribed Cruden Golf Club 1791. It is believed they played a golf course on Ward Hill near Slains Castle seen from the third hole at the north of the present course. The present Cruden Bay Golf Club possesses a winner's medal from a competition played on Ward Hill dated 1883. Local legend has it that the turf for the greens on the 1899 course was originally take from the Ward Hill course, in return for discounted rates of membership.

There was probably also a later course, inland of the present one. In 1897, J Dalgarno reports that there was a course was laid out by Captain Webbe, the Earl’s brother-in-law, which was played by both lady and gentlemen golfers until 1895 when the new railway line and station cut the course in two.

So there may well have been two courses in 19th century played simultaneously, of which the Ward Hill course would have been the older.

The hotel was demolished in 1947, having spent the war years requisitioned by the army. The course was taken over by the local club who constructed a new clubhouse.

Since 1975 crude oil from the Forties field in the North Sea has been pumped ashore at Cruden Bay, which can be seen at the turn at the south of the course.

The website for the The Port Erroll Golf Club reports that it is now an autonomous club within the Cruden Bay Golf Club with a limited membership of approximately 75 players, playing competitive golf every Wednesday evening from the beginning of April until the end of September.