The sole evidence for the Club's early existence is a newspaper notice of the 'general annual meeting' to be held at Williamson's Tavern with dinner at 4pm on Wednesday 3rd July 1793.  This was published in the Caledonian Mercury on 27 June 1793. The golf club is called the Fortrose Golf Society and the only two officers of the club mentioned are Charles Mackenzie, the President, and Duncan Munro, the 'Croupier'.  No captain is given but the concept of Captain as the key office bearer was not yet an established part of all golf clubs.

The Mackenzie family owned the village until they sold it sold to the Rosehaugh Estate.  The first evidence of golf being played over 'Chanonry’, the old name for Fortrose, was in 1702 by George Mackenzie, Provost of Fortrose, in a letter to his Edinburgh agent.

Charles Mackenzie (1756-1813) would have been a fitting President. He was the eldest son of Colin Mackenzie, 6th Laird of Kilcoy, who died in 1758, so Charles became 7th Laird when he was only two. He married Jean Gordon-Grant in 1781 and their son Colin became a Baronet in 1836.  At the time of the meeting, Charles is listed as Ensign in the 78th Regiment of Foot, in which his younger brother, Alexander Mackenzie living at Belmaduthy  was the Lieutenant-Colonel. Alexander, who was also a golfer, would go on to have one of the most illustrious careers as a soldier as well as serving as MP for both Cromarty and Ross-shire in successive parliaments. It is very likely that Alexander was present at the golf and dinner.

The term 'croupier' had begun to be used at this time as the vice-chair at a meeting, which meaning has now fallen out of use, but which obviously applied here. However, it may also have meant its older (and present) meaning someone who manages the betting , which was a central part of golf club dinners for decades. The dinner may well have been  a match dinner at which matches with suitable 'odds' would be arranged. Duncan Munro of Culcairn (c1755-1820) was a military man.  His mother died when he was two and his father died in Bombay when he was eleven. A few years later, Duncan entered the army.

At the time of the AGM notice, Duncan Munro was married to Jean Kirk with a son and two daughters. He was Captain-Lieutenant in the recently created 78th Highland Regiment and aide-de-camp of Charles brother, Lt-Col Alexander Mackenzie, mentioned above. Two years later he distinguished himself at the battle of Geldermalsen, where he was wounded, and later he went with the regiment to India. Duncan retired from the army in 1802 and was appointed Lieutenant Colonel of the Wester Ross Regiment of Militia.

The area of play is described by the local minister, Rev Wood, in the Statistical Account of 1793. He wrote that it was on the Chanonry Ness promontory, probably the south side on the area of the caravan park and possibly the 6th, 7th, 8th and part of 9th holes of the present course.  Other early members of the club may have been Dr Tulloch, the local doctor, and Mr John MacQueen, the Rector of Fortrose Academy, named as playing over the links on about 1800.

Like a dozen other golf clubs of the day, the early Fortrose club went into abeyance at the turn of the 18th/19th century as a consequence of European wars, economic turmoil and demographic change. These problems were more noticeable in the north of Scotland where employment was harder to find. There is therefore a significant gap before the establishment of the Fortrose and Rosemarkie club in 1888.

The revival of golf was largely stimulated by the arrival in 1876 of Mr Kennedy, a merchant, who had returned from Shanghai with his wife and family. He cut golf holes on the north side of the promontory near the present clubhouse. Intriguingly, Mr Kennedy was not one of the 17 founding members who met to create the present day Fortrose and Rosemarkie Golf Club in 1888. Its patron was Douglas Fletcher, owner of the vast Rosehaugh Estate and controller of the land they needed to play on.  Six holes were laid out, three on the seaward side and three on the higher landward side, which were formally opened on 8 June 1889, to much local acclaim.

The first Captain of new club was Alexander Mackenzie, Laird of Avoch, who was the son of Sir Alexander Mackenzie, pioneer and 'discoverer' of the Mackenzie River in Canada. He was the first Captain of the London Scottish golf club at Wimbledon and he had just purchased the Deanery on his return to Fortrose. He remained captain of the club until his death in 1894. Other early members include three generals, members of the clergy, the Provost, two Baillies, the Town Clerk, a Sheriff  and the local Member of Parliament. 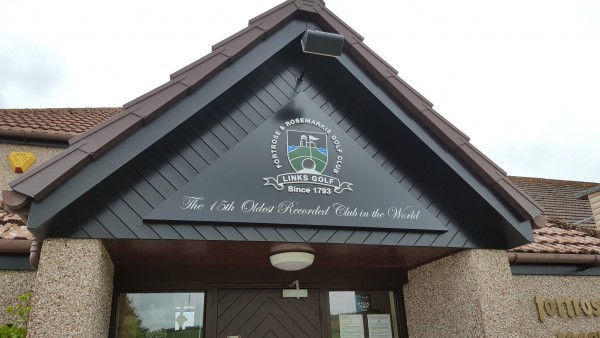 A clubhouse was sponsored and opened in 1895 by Miss Mackenzie of Flowerburn. The course was lengthened in stages, first to nine holes in 1900 and then to 18 holes in 1924. In coming years the course would be redesigned and further developed.

Fittingly, the opening of the 18-hole course was by a soldier and long time and distant relation of Lieutenant-Colonel Duncan Munro.   He was Sir Hector Munro, Lord Lieutenant of Ross and Cromarty, the 32nd Chief of Clan Munro, 29th Baron and 11th Baronet of Foulis, and aide-de-camp of both King Edward VII and King George V.