The earliest golf recorded in the Dunbar environs are prosecutions for Sunday golf by the kirk, probably over the West Dunbar Links, as outlined in 1616 Dunbar.

In 1794, the 'Dunbar Golfing Society' set down its Regulations and listed 27 members, of whom 26 were present and one was marked absent. The Regulations only concerned the club and covered the process of the meeting and club payments and not the rules of golf.

1 The members shall meet at the West Barns Links the second Wednesday of every month.

2 When the expense of each member for dinner amounts to 2 shillings and 6 pence the club shall be dissolved.

3 Every member for every time he is absent, shall pay 1 shilling towards defraying the expense of dinner.”

This document was apparently held, in turn, by the Rev William Whitfield, the Rev John Kerr and JH Taylor before coming back into the possession of the Dunbar Golf Club in 1946. A copy of it can be seen in their clubhouse.

As mentioned in the Regulations, the early club played over the West Barns Links, which can be located in later Ordinance Survey maps, seen on this page, and shown on 1616 Dunbar.

No further record of the early Dunbar golfers survives. The West Barns Links were taken over for military training, during and after the Napoleonic Wars (1794-1815). There was a rifle range, as a result of which, golf there waned for decades.

Though there is anecdotal evidence of occasional play throughout the early 19th century, it was the opening of the railway line in 1846 and the establishment of local military barracks in 1855 that signalled a new beginning for golf in the area.

In 1890, the West Barns Links revived, but when the local Council opened the Winterfield Links it rendered West Barns unviable and they disappeared.

In the meantime, in 1856, when the Dunbar Golf Club was formed, it negotiated playing rights over the East Links. The ‘official’ club beginning/revival was on 20th December 1856, when six gentlemen met at the town hall. They were George Warrender of Lochend, (later the 7th Baronet of Bruntsfield), Captain James Cox of the Berwickshire militia, Lt. John Stewart, William Anderson, James Brand and John Jaffray. At the time, Dunbar was a military town and, as with other contemporary golf clubs, the services played an important part in the creation and running of the club.

The Club minutes reported that the first course required “clearing of the ground” which strongly suggests that there was no pre-existing course. Initially, fifteen holes were laid out to the seaward side of the large wall which runs between current eighteenth and fourth holes. The course became known as Broxmouth Links or East Links.

The first Captain was George Warrender, who had organised the inaugural meeting. Initially, the Dunbar club used the St Andrews club rules, with the additional rule that any obstruction within twenty yards of the putting hole be removed. In 1859, they formed a committee to create their own rules.

The Duke and Duchess of Roxburghe provided the club with a clubhouse in 1871. The old club-house building still exists and is the house on the right at the entrance to the club's drive. 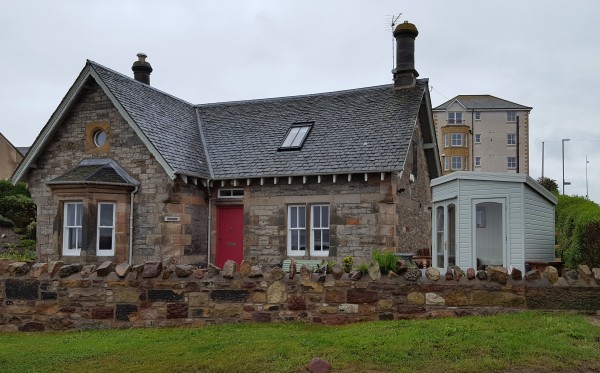 In 1902, this clubhouse was superseded by a new one, which was subsequently extended in 1968 after years of agonised debate over costs and plans.

The Broxmouth Links were extended to 18 holes in 1880. The course covered 4,701 yards, going as far as the current 8th green and in 1883 the club adopted white flags for the outward nine holes and red for the inward holes.

In 1882, a local residents club, called the Dunbar Castle Club, was formed. This functioned like an artisans' club, with a view of enabling lower cost golf. In 1884, the Rt. Hon. Arthur Balfour joined the Club and was appointed Captain. At the time, he was a member of the British Cabinet, but he became Prime Minister in 1902.  The Castle club still exits but nowadays members are required to join the Dunbar Golf Club itself.