Originally a ‘gentleman’s' club, St Andrews Thistle was run on strict lines, but with a subscription of 10/- a year it struggled against the established presence of the existing gentleman's club, the Royal & Ancient. The Thistle Golf Society was dissolved in 1839. It reformed in 1865 as an artisan club called the Thistle Golf Club and it soon had about 50 members.  By this time, the Leith Thistle were in abeyance and so there could be no confusion with any other club.

Its oldest medal dates to 1819 and was won by John Buddo, who under the then rules was barred from competing for four years to give other members a chance to win it, a farsighted psychological strategy that could usefully be brought back for some golfing prizes today.

Old Tom Morris had returned from Prestwick in 1864 and was made an Honorary Member of the Thistle and on its Council, though he was a founding member of The St Andrews Golf Club in 1843 before he went to Prestwick.  Old Tom worked tirelessly to promote golf and assist others doing so where he could. Another member of the Thistle was Old Tom's first biographer William Tulloch.

Old Tom and his son, Young Tom Morris, won the Open title on eight occasions, between them.  Young Tom won the Belt three times in a row, 1868 - 1870, which entitled him to keep it and gave rise to a gap the Open's history and the creation of the Claret Jug, which became the prize from 1872 onward. Young Tom won again in 1872 thus becoming the only person (so far) to win it four times in a row. He died at 24. Old Tom died 33 years later, in 1908, and both are buried beside each other in the grounds of St Andrews Cathedral. 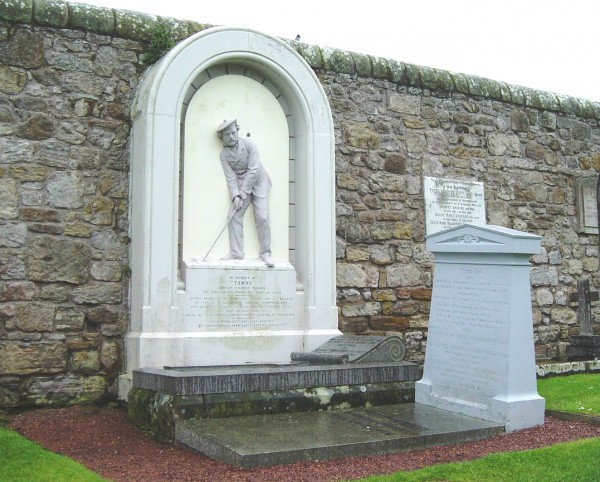 Young Tom was demon driver and putter. Old Tom was led down by putting. Young Tom once said

"that his father would be a good putter, if the hole would only meet him half-way."