The recent discovery of a letter from 1812 reporting contemporary golf being played on Kinghorn Links makes it the fifth oldest recorded golfing ground. The letter says that the golfers have the right to play there 'from long possession', which implies personal knowledge that golf went back several decades into the 18th century at least. Through the name and ownership, it is clear that the land on which the golfers were playing was the land which the Council bought in 1886 to create the present course.

Kinghorn was an ancient Royal Burgh with important connections to Edinburgh & St Andrews and golf at Kinghorn was recorded in Kirk Session Minutes back in 1608, so its ancient golfing history is not totally surprising, even if it is late in being publicly acknowledged. 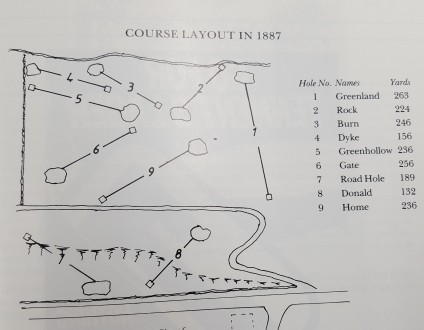 There is no evidence of a defined golf course on Kinghorn Links prior to 1886, when the Council bought the land from the Shanks family. An 9-hole course was laid out by Old Tom Morris and officially opened on 23rd July 1887 by Mr William Nelson, an Edinburgh publisher. This purchase was an early example of commercial development by a Council to create income from golf tourism and it was very successful at Kinghorn. A plan of the early course shows few of the holes are still in use, though the 1st and the 8th (now 18th) appear to be.

In 1905, the Council bought more land, called the ‘Castlerig lands’ to the north towards Kinghorn Loch. This enabled the course to be expanded to 18 holes. According to the Kinghorn GC minutes, the new course was designed by Willie Fernie of Troon (though one local paper said that it was Old Tom). There was an opening ceremony on 27th July 1906.

William Gibson moved his golf-club making business to Kinghorn in the early 20th century, evidence of Kinghorn's growing success as a golf venue. The factory was based where the tannery was to the right of the first hole.  In 1926, additional land was purchased towards the tannery, providing a buffer to the right of first hole.

For financial reasons, the Council sold the Castlerig land on the north in 1943 to the Co-op, though they leased back a strip of 16 acres that currently covers holes 2, 3, 6, 7 and 8. This strip of land was eventually bought back into public ownership in 1979. Interestingly, the oldest looking features of the course are on this strip of land. The most recent alteration to the course was in August 1965, when the present 14th, 15th and 16th holes were laid out.

The 2017 course is a short par 65 of 5141 yards, but, because of the terrain and fast greens, it plays like a par 70+, requiring accurate positioning of drives and approach shots. There are several blind drives and three 'crossings' from medal tees, though only one from members' tee. The gorse has been cut back, but the undulating terrain and rabbit holes give it the look of a very old course.

Many holes are named after local features. The first hole is called 'Castlerig', which refers to the lands or title dating back to 1286. The 18th hole is called the 'Cryin’ Hill', so named as this was where warnings were shouted to boatmen or travellers in olden days, though golfers nowadays may put a different construction on it. 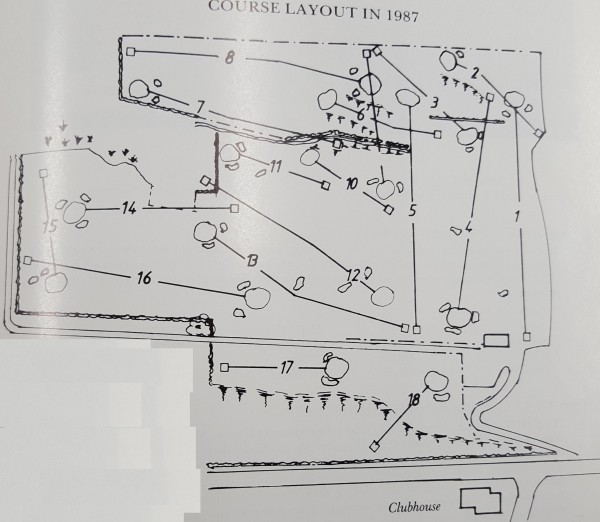 Kinghorn golf course 1987, unchanged from today except for 2nd tee. The land to the east and north are later additions.

Newspaper reports in 1873 say that the Kinghorn golfers were organising to pressure the Council to buy the Links, but it was not until 27th January 1887 that the Kinghorn Golf Club was officially instituted. They were joined by the Thistle and Castlerig clubs (though there is a statement on the website that the Kinghorn Thistle Golf Club was formed in 1885). These were artisan clubs, and the Thistle is now one of very few Thistle clubs still in existence. (The others are Earlsferry, Leven, Edinburgh and St Andrews.) 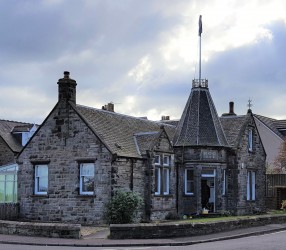 The first clubhouse for Kinghorn GC was built in 1894 for £687 on the opposite side of Burntisland Road from the course at the junction of MacDuff Crescent. It is a single storey house with a semi-octagonal entrance tower and flagpole. Now converted to residential use, the initials KGC inscribed above the door are a physical reminder of its historical association with the Kinghorn Golf Club.

The most famous competition on the links was the Kinghorn Open of 1921, sponsored by Wm Gibson & Co, the local golf-club manufacturing company. It was won by Jock Hutchison of the USA who went on to win the national Open at St Andrews shortly afterwards.

The course is owned by Fife Council and managed by Fife Golf Trust, who run six other courses and whose starter occupies part of the pavilion clubhouse at the course. The Kinghorn green fee is only £12 during the week, which is the cheapest of all the oldest golf course listed here.

Kinghorn hole 13 with clubhouse and Forth and Lothian in background