Golf has been resuscitated at Kingsbarns on 17th July 2000, after an absence of half a century.

The Kingsbarns Golf Club, which can be dated back to 1793, played over what was called the Cambo Links. When play started there is not certain, but there is a detailed newspaper report from 1823 of play on Cambo Links. Based on an analysis of the winning scores for the medals of 1840 - 1842 and the average course bogey of the time, it is likely that this was no more than 7 holes.

It is believed that the original 19th century course was to the right of the Kingsbarns' harbour, which covers part of the present course. The Kingsbarns Links state that holes 6, 7, 16 and 17 are on the site of the old course.

The Golfer's Manual of 1857 describes the Cambo Links as

The Links is small and of a sandy soil. The Grass grows rather coarse for the finer shots of the game, and there are few if any hazards.

This description may have been out-of-date, as the tenant farmer had ploughed up the land in 1844 and the club went into abeyance until 1922, when a new nine hole course, designed by Willie Auchterlonie, was laid out. Sadly, in the Second World War, the land was again returned to farming. Though there was a brief resumption afterwards, it did not last and in 1948 play transferred to Balcomie course at Crail.

Both Kingsbarns Community history and the Kingsbarns Links information book have a map of a course showing nine holes where the present links are. The date is ascribed to 1815-1948. This course plan shows separate tees and greens, but separate tees did not exist until 1875 and this is almost certainly the layout of the later 9-hole course, created by Willie Auchterlonie. 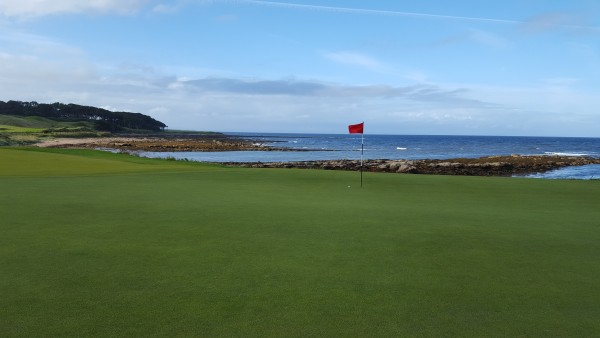