When Scotscraig Golf Club was founded in 1817 it played 6 holes in the Garpit racecourse. There is no known history of racing there but it had 6 golf holes, though for how long before is unknown.

On earlier maps Garpit is apparently referenced as Gazpett and Galepit. On the 1828 map of the counties of Fife and Kinross by Christopher Greenwood, William Fowler and T Sharp, the extensive racecourse is marked to the north west of Garpit and the east of Scotscraig. It ran round Links Wood, down the west of the course boundary and back towards the clubhouse. 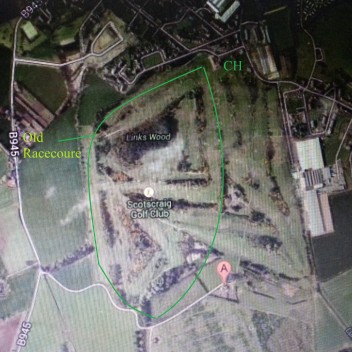 The present course is on the site of this racecourse, to which the club returned in 1888. This makes Scotscraig golf course the oldest course owned by the club which founded it and still plays it.

Competitions of the new Scotscraig Golf Club in 1817 were decided over three rounds of the Garpit's six holes, that is 18 holes in all though this was probably more accident than design

The first competition winner with 105 strokes for the 18 holes was Captain Playfair, who would later become Sir Hugh Lyon Playfair, Captain of the Royal and Ancient, and instigator of the clubhouse facility there at the Union parlour. Scotscraig was an early adopter of 18 holes as a medal round, which may have been influenced by its members who played the Old Course.

In 1834 Garpit links were ploughed up by the tenant farmer and the members tried to continue by playing at Montrose and elsewhere. However, by following year the minutes stopped and the Club effectively went into abeyance, until the 5th May 1887, when a meeting in Templar's Hall in Tayport was held to re-constitute Scotscraig Golf Club, initiated by local land owner, Admiral Maitland Dougall.

The first course they created to the west of Scotscraig was not satisfactory, so the members petitioned the Admiral for a new course and this was duly opened in April 1888 on the site of the old Garpit course and racecourse, with members having use of the nearby fever hospital as a locker room. By 1893 it was 9 holes, though it did not become 18 holes until 1904.