Though golf has been played at Gullane for many years, the location is not certain until the 1840 when the layout of the first 7 holes at Gullane. They start at the present 18th green, playing out and back, and then over Gullane hill on the line of the present first hole. The last hole crosses the first, which was common in those days, to finish where the course began.

The plan below shows the 7 holes and Golf Tavern where Gullane Club held their first meetings. The evolution of the course can be seen in a set of plans in Gullane clubhouse presented by Mr Hall-Blyth. The old Golf Tavern, the white house in the centre of the picture above, can be seen on the plan to the right of the first tee. 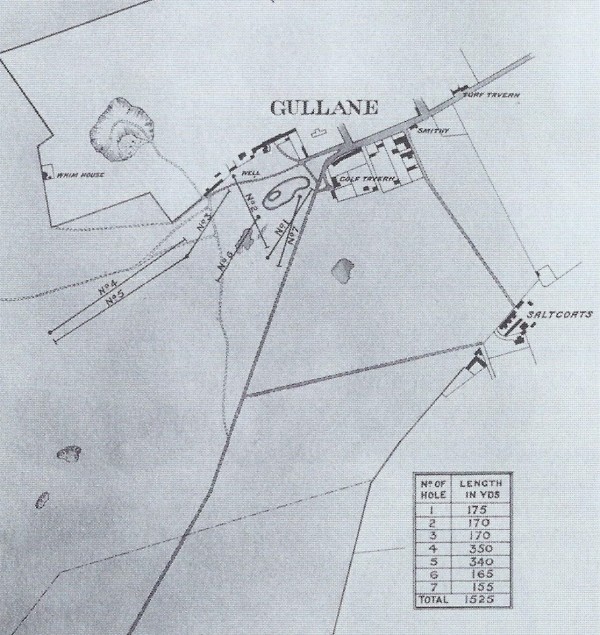 In 1878, there were discussions to extend the course to 18 holes, but in the event it was extended to 15 holes, over several evenings work by the members themselves.

The state of the links was an increasing concern to the golfers and in 1882, ‘eight gentlemen of Gullane’ met to consider their upkeep. The result was the formation of The Gullane Golf Club which solicited memberships from local golfers to obtain funds to keep the links up. Although numbers rose steadily it was not without issue as many existing golfers objected to paying for what they thought they had a right to do.

Finally in 1884 Gullane became 18 holes, though it would be re-arranged when Gullane 2 was created in 1898 and Gullane 3 in 1910, which Willie Park Jr designed. Some of the course changes were necessitated by the building of new clubhouses. In 1889 a clubhouse was built in the village, which is today a pub and restaurant, called ‘The Old Clubhouse,’ beside the children’s course. Then forty years later, in 1929, following acquisition of land surrounding the ladies old clubhouse, a new clubhouse was opened overlooking the first tee of Gullane Course No 1.

Gullane links was considered common land but most of Gullane was owned by Mr and Mrs Hamilton Ogilvie. This led Mrs Hamilton Ogilvie to ask for payment from the golfers, and this triggered events leading to the demise of the Old Luffness course, which was partly on Gullane land. In addition, there was competition for the use of land from horseracing, until it was banned on Gullane hill in 1892. In 1891, Muirfield was built on the site of a racecourse.

By 1910, there were three 18-hole courses plus a children’s course.

In 1993 a Visitors Clubhouse was built adjacent to the start of Gullane 2 and 3, on the other side of the road from the professional shop, start of Gullane 1 and Gullane members’ clubhouse.

Gullane 2 holes 1 & 18 from Gullane Hill, with visitors' clubhouse on left