The mention of the Royal Curragh Golf Club at 1858 will be a surprise to some the Curragh golf club was recorded in the early Golfing Annuals as being founded in 1883, and earlier references were often discounted. The introduction of digital newspaper databases, with some careful investigation by the club archivist, has produced new information on earlier club activities and a more complete picture of golf at the Curragh.

The earliest golf on the Curragh is believed to be 1852, derived from a later report of a game of golf between the Earl of Eglinton and Colonel (William) Campbell on the ‘links’ on ‘the beautiful plain of the Curragh of Kildare’. This note appeared in The Field September 1875, by ‘The Cady in Scarlet’, now identified as Major Alexander Cunningham Bruce. These were eminent golfers. The Earl of Eglinton first arrived in Dublin as Lord Lieutenant on 9th March 1852. The Earl had been Captain of both North Berwick GC in 1938 and Prestwick GC 1851 and he would be Captain of R&A in the following year. His opponent, Lt Col William Campbell, would be Captain of Prestwick in 1854.

Donnelly's Hollow on The Curragh, site of boxing match Donnelly vs Hall 14 Sep 1814

It is not known for certain where they played golf, but in 1857 David Richie a member of Musselburgh is recognised as playing on a links 'near Donnelly’s Hollow'. For many years a 'gutty' (gutta-percha golf ball) resided in the clubhouse of the Royal Dublin Golf Club with a certificate saying:-

“This ball was played by me in a match with the late Mr. Alexander Love, on links near Donnelly’s Hollow, Curragh on 15th July 1857.” 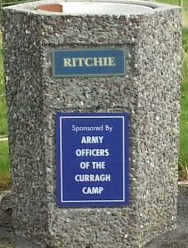 Sadly the ball disappeared and a small piece of history was lost, though multiple references and statements supporting its existence and the event have been traced. From family reports, David Ritchie probably laid out a course there in 1852, but was unable to get any support for golf at this time from the local Scottish militia stationed there and 1857 may have been his swansong.

However, at this point, newly arrived militia did take an interest, as new research in 2010 has shown. The Lanarkshire Militia arrived in the Curragh in early 1858, as part of the military response to the Indian Mutiny of 1857. In July 1858, three newspapers carried identical reports of a social activities at The Curragh Camp. They were the Belfast Newsletter, the Freeman’s Journal (Dublin) and the Morning Chronicle (London) and included clear references to a golf club. 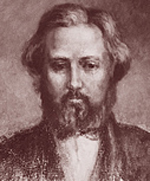 A proper course was then created, as recounted by Andrew Smith-Maxwell in the Irish Golfer in 1908. He was serving with the Royal Lanarkshire Militia in 1858 and he reported that when the Earl of Eglinton returned to Ireland in 1858, he requested him to lay out a links. Smith-Maxwell arranged for John Gourlay the renowned golf ball maker to come over from Musselburgh and assist him in laying the holes out and the Earl regularly played there with military colleagues and John Gourlay during his stay between March 1858 and June 1859.

Thus an informal links in 1857 and a formal links in 1858 on today’s site can be confirmed, even if the number of holes is now known. By the time of the report of the Cady in Scarlet in The Field in 1875, a links of 12 holes covering 2 miles is mentioned, ‘following the run of the plain to advantage.’

Changes were perchance made as The Golfing Annual of 1887-8 reports that the course was eleven holes of two and half miles round with a variety of hazards, but the following year it is reported as 18 holes at three miles round.

The Lanarkshire militia had been involved for several years in the military operations required for the Crimean War (1853-1856) and Indian Mutiny (1857). The result of this was to create one of the earliest extant golf courses in the world.