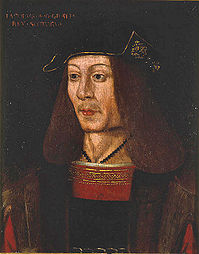 King James IV was a peripatetic monarch. He travelled regularly from palace to palace round Scotland. Stirling Castle was an important haunt of his, where he carried out significant building works.

As several histories mention, the Accounts of the Lord High Treasurer of Scotland record that James IV spent four shillings buying 12 golf balls on 29th March 1506. Later that year, on 23rd July, he spent two shillings buying two golf clubs. These don't appear to be related to Stirling, though he visited there several times in 1506.

More importantly, from a reference provided by the Stirling Smith Museum, additional purchases of two clubs have been found in December 1506. These were from a notable bow-maker and one of the clubs was sent to Stirling, presumably to be used to play golf there.  The full significance of this purchase has only just been recognised.

If King James IV did play at Stirling Castle, it may have been on the King's Knot at the foot of the castle or in the royal park beyond. 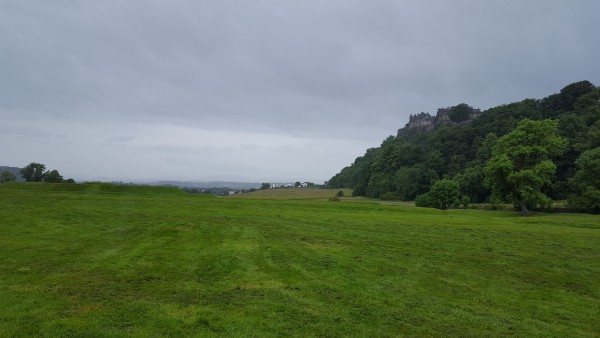 The chapel at Stirling Castle dates from 1107-15, when King Alexander I endowed it.  Four centuries later, James IV built the outer defences and the Great Hall in 1503, during the time of his golfing records.

The King was not the only person playing golf at Stirling in 16th century. Alexander Ra was a Burgess in Stirling, who died in 1568. His estate inventory listed three dozen golf balls which were valued at 14 Scots shillings. Whether Alexander played golf or just supplied the balls to others is not known, but this and similar references indicate that golf was already more widely played than just among the aristocracy.

Stilring is home to the oldest leather stitched ball in the world, thought to be a football, which has an almost identical construction to featherie golf balls. It has been dated to 1514-70 and is strong evidence that early golf balls were made of leather and filled with cow hair or feathers and not wooden as previously thought.

A noteworthy incident in Stirling's history is that it is the site of one of the first man-powered flights. It was successful, in that the pilot survived. On 27th of September 1507, the King's chief alchemist, John Damian, (an Italian called Giovanni Damiono), made a pair of wings from hen feathers and threw himself from the battlements of Stirling Castle, suffering only a broken leg in a fall of several hundred feet.

Beyond the King’s Knot, and stretching into the distance, lay the King’s Park. This was the royal hunting forest, where the king and his courtiers could hunt red deer or wild boar.

The King's Park is extensive and the course of  Stirling Golf Club, founded in 1869, is located within the park.