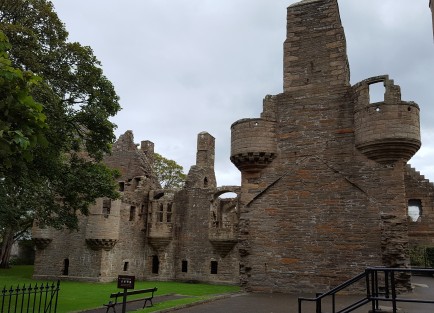 Orkney has been overlooked as an early golf centre largely because each golf incident was either discussed in isolation or was not evidence of golf being played.

For example, there was a well-known historical description of a siege in Kirkwall in 1614, drawing an analogy between cannon balls and 'golf balls'.  This was during the ill-fated rebellion of the son of Earl Patrick Stewart, when George Sinclair, Earl of Caithness, battered Earl Patrick's palace with 140 cannon shot. Both Earl Patrick and his son were subsequently executed for treason. During the military occupation of Orkney, which followed the rebellion, there is a widely-reported conviction in 1619 of soldiers for stealing golf balls. If there were golf balls on the island, then golf must have been being played!

Recently, more evidence of golf on Orkney has emerged, including one record predating both of the above events. This details supplies of golf clubs and golf balls and the identities of some of the players.

The first reference with named golfers is in 1585, when James Dickson wrote a gossipy letter to a colleague called Andrew Martin, who was on the Scottish mainland. After requesting headache medicine and sending him best wishes, James added a postscript asking Martin to bring back with him a dozen 'common' golf balls to Orkney for himself and David Moncrieff.  Common golf balls were probably a cheaper kind of leather stitched golf balls.

Ye will remember to bring with yow ane dossen of commoun golf ballis to me and David moncreiff.

James Dickson signs himself as the servitor to the 'Master of Orkney', who was, at the time, Henry Stewart. Henry Stewart was the eldest son of Earl Robert Stewart, the illegitimate son of James V and the 1st Earl of Orkney. Henry died 'mysteriously' before his father, which is how his younger brother, the infamous Patrick Stewart became Earl (see above). David Moncrieff is a more shadowy figure. He is possibly Baillie Moncrieff of the Inns and is believed to be descended from the Moncrieffs of Moncrieff in Perthshire. 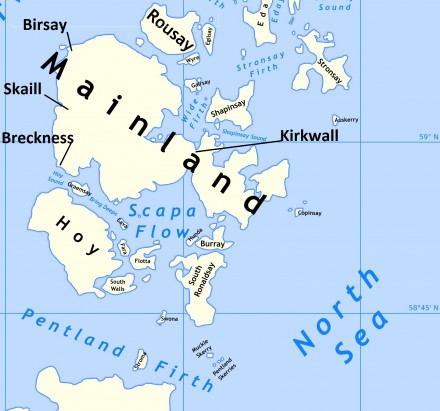 Orkney Mainland, showing Birsay, Skaill and Breckness on west coast and Kirkwall on the north coast.

It is presumed that James Dickson and David Moncrieff were playing partners, but where were they playing? The Earl's Palace in Kirkwall was not yet built, so James Dickson was probably based at the first Earl's Palace at Birsay, built between 1569 and 1579. If so they may well have played golf on the links nearby.

There are two known possible areas for courses there. A mid-1700s map of the Palace shows a 'Links' 150 metres to the south on the east of the road over the bridge on the river. In 1889, when the Orkney Golf Club started, they held their first meetings at Birsay and the Ordnance Survey map shows a golf links to the north of the Long Gloup  about a kilometre from the Earl's Palace. There certainly seem to be strong and continuing golf connections at Birsay.

Alternatively, it is possible that James Dickson may have been in the Bishop's Palace in Kirkwall, which Henry Stewart's father had acquired in 1568.  The letter was written from here. Later historians believe that ball games in 17th century were played on the 'Ba' Lea' (the ball green) which was close to the Bishop's Palace. It would have been between the East Kirk and Warrenfield, over the area to the south and east of the ruins of the Bishop's and Earl's palaces in Kirkwall. As Henry Stewart died in 1586, James Dickson may not have been there long, but Moncrieff is reported to have still been alive in 1614. 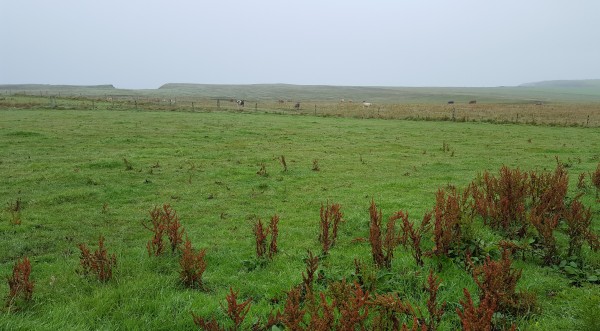 Birsay Golf Links north of Palace, shown on OS maps of 19th century, where the Orkney Golf Club held their first matches. The Long Gloup is just visible in the distance.

Dickson's letter ended up in the possession of Sir Patrick Vaus, Lord Barnbarroch, who was a confidant of the Earl of Orkney and a well-connected individual. The original document was lost when Barnbarroch House burned down in 1941.  Luckily for history, a descendent of Patrick Vaus, Robert Van Agnew, had published a complete transcription of Sir Patrick's extensive papers in 1882 as 'The Correspondence of Sir Patrick Waus'. The Dickson letter was later referenced in the Badminton Library publication on 'Golf'  in 1890, but it has been otherwise overlooked for no apparent good reason. This may be partly due to the fact that one publication got the date wrong by a hundred years!

Apart from the golf ball theft in 1619, there is then a gap of over fifty years with no known mention of golf in Orkney, but in the second half of the 17th century there are many documented instances. Most of these concern the influential Graham family, whose descendants still occupy Skaill House, for which there is a comprehensive history. 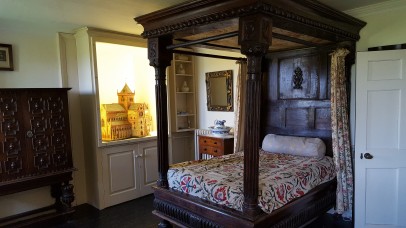 Skaill House, Bishop Graham's bedroom with chest of drawers to the left

In the aftermath of the fall from grace of Earl Patrick Stewart, Bishop George Graham was appointed Bishop of Orkney and he took over the Earl's Palace as well as his bishopric properties. Bishop Graham had been trained at St Andrews, a noted golfing centre at this time. Over the years, the Bishop built up a sizeable property portfolio in Orkney, including houses at both Breckness and Skaill, which his eldest son John Graham (1616-1666) inherited in 1643 and expanded. Initially, John had lived at Breckness House, but he had acquired Skaill House when his younger brother had moved out to live in Fife. John Graham and his descendants have been based there ever since, although the extensive estate continued to be called the Breckness Estate. The family were well-to-do people, who served in many prominent local positions. Nowadays, Skaill House is best known as the site of Skara Brae, the Neolithic settlement, discovered by Willie Watt, the 7th Laird of Breckness, in 1850. You can visit the house and see Bishop Graham's bedroom and chest of drawers.

Whether John Graham was a golfer or not, his son Harie Graham (1648-1718), 2nd Laird of Breckness, almost certainly was. There are two sets of receipts a decade apart for golf supplies to the Breckness Estate from the merchant Arthur Baikie. The first is shortly before John Graham's death. At the end of 1663, Baikie rendered an account of deliveries which he had recently supplied. There were 70 diverse items such as gloves, sealing wax, tobacco, brandy, ribbons and white sugar. It also included several deliveries of 5-8 golf balls, including 'flok' golf balls, probably featheries, as well as a golf club.

Ten years later in December 1673, there are more receipts for three 'gouff' balls, which seem to have been individually delivered by Arthur Baikie with other goods.  Baikie was one of 40 merchants known in Orkney during this century and he supplied other notable people such as the Earl of Morton and local minister. In his later years, Harie Graham spent more time in Edinburgh on official and private business, so he would have been able to source golf items there.

There is another contemporary golf connection to the Graham family. In 1650, James Graham, 5th Earl of Montrose, launched a poorly-supported, Royalist, invasion against Parliament from Orkney onto the mainland. Although initially a Covenanter, he had changed sides following the execution of King Charles I. The cause was hopeless and he was defeated and executed. Montrose had been a golfer since his student days at St Andrews in 1628-29 and even played golf before and after his wedding.  John Graham and the Earl of Montrose were first cousins three times removed.  As a result, John Graham had initially supported Montrose when he arrived on Orkney, but he did not travel with him and John managed to escape the worst of the reprisals that were subsequently taken against Orkney for its part in the rebellion. 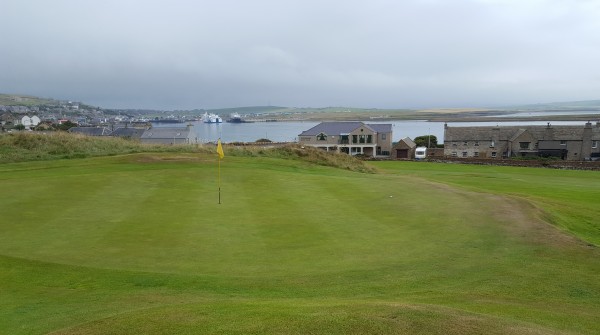 The Graham family were not the only people playing golf on Orkney during this period. Orcadians have always been proficient sailors and merchants and a recent study of trade of the northern islands in the 17th century has revealed ownership of golf balls and golf clubs by several merchants. A shop owner called Harry Prince, who died in 1649, left an estate worth £400 which included golf balls. In 1676, there is mention of golf clubs in the estate of the widow of William Farquhar, which presumably belonged to her late husband.

Recently, another reference was found in the accounts of Alexander Cunningham. On 7th February 1689, his receipts included the supply of eight golf balls at 4 shillings each and five golf clubs (klubes) at 10 shillings each. These prices would not be much different to prices in Edinburgh at the time. The golf equipment was much cheaper than the shoes or brandy or ribbons that he was also supplying.

It may be a bit of an exaggeration to call this the 'Orkney Golf Club of 1680', as one commentator did, but clearly there was a thriving golf community on Orkney centuries before 1884, when Angus Buchanan is credited with 'reviving' golf. He was a lawyer and agent for the National Bank, as well as being a one-time rugby internationalist. 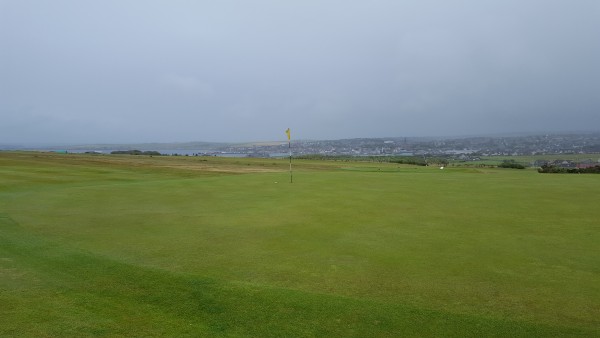 Orkney now boasts two golf clubs the Orkney Golf Club (1889) and the Stromness Golf Club (1890).  They each represent where golf was played by James Dickson and by Harie Graham on the Skaill/Breckness Estate, though they are, of course, some distance from where that it was.