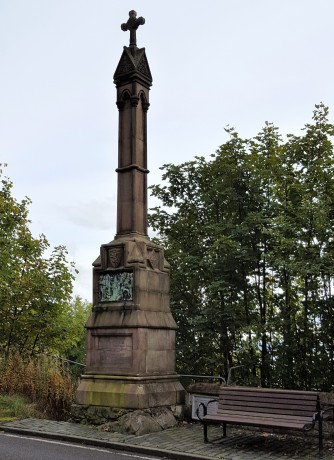 Monument to the death of King Alexander III in 1286 on the road from Kinghorn to Burntisland.

Kinghorn was probably a Royal Burgh from the 12th century, but certainly from the days of King Alexander III, who died there following a fall from his horse in 1286. His body was found half way down an escarpment close to where his monument now stands. This was when the Castlerig title and links land were given to Murdoch Shank in appreciation of retrieving and taking care of the King's body. The Shanks family owned the land for 600 years until it was sold to the Council in 1886, which allowed the public golf course to be created.

There was a royal castle at Kinghorn from Canmore days until King Robert II gave it to his son-in-law, Sir John Lyon, after which it became known as Glamis Castle or Glamis Tower. Several generations later, the Lyon family traded up their title and Kinghorn estate for new titles and lands in Strathmore, where they built a new Glamis Castle, which has given rise to several confused historical 'facts'. The farmlands to the west of the castle at Kinghorn were known as the 'Castlerig Lands', which became the northern part of the present Kinghorn course and the field beyond.

Kinghorn was a very important town for travellers. The main ferry from Edinburgh to Fife went from Newhaven harbour to Pettycur harbour at Kinghorn for hundreds of years, until replaced by one from Granton to Burntisland (c1848).It is very likely that some of the waiting travellers amused themselves playing golf on the 'Cryin' Hill' above the Royal Burgh, where they could watch the weather and the ferry.

There was a prosecution for Sunday golf at Kinghorn in 1608, recorded in the local Kirk Session Minutes. The Minutes date back to 1581 and there are gaps. The main record starts at 1607, so there could be missing golfing records. A selection of these Minutes was published anonymously in 1863 in aid of the local militia.

4th December 1608, On which day John Stainhows (Stenhouse) denounced William Stokis, Alexander Stokis, David Fermour and Thomas Craig, who were playing golf on the Sabbath day and who, on being reproached by the aforesaid John (Stenhouse), David Fermour answered …..

Taken from Extracts from the Ancient Minutes of the Kirk Session of Kinghorn, Kirkcaldy 1863.

The Minister at this time was John Scrimgeour. He had replaced Thomas Biggar, who had died in 1605. Scrimgeour was generally well liked and may well have been a golfer himself. He was, however, an independent minded person and he fell out with the senior clergy over procedural matters. At this point, John was replaced by his brother, who was not popular with the congregation.

Where the miscreant golfers played is another question. Given its age, Kinghorn was a developed town, covering a wide area, but there still were open grounds apart from Kinghorn Links, such as the Rosslands, to the south of the Westgate (High Street), between the harbours. So it is not possible to be sure that the golf in 1608 was on Kinghorn Links.

As mentioned above, Kinghorn Links had been owned by the Shanks family since 1286. In 1608, the proprietor was Henry Shanks of Castlerig, though whether this was the 7th or 8th incumbent of the title is not certain, as they were both called Henry. Henry Shanks appears in the Kirk Session Minutes in 1624, when he is wanting to make an alteration to his kirk pew.

Henry Shanks was Member of Scottish Parliament for Kinghorn in 1643 and he is mentioned in the Kirk Minutes as Baillie in 1644. His son and heir was called Martin but his grandson was again called Henry Shanks, who married in 1669. The anonymous commentator who published the Extracts of the Kirk Minutes in 1863 said that Henry Shanks was the kirk treasurer, whose house could be seen above the railway viaduct. This may be today's Auld Hoose pub. The Shanks were the type of family who could have been golfers and later members were ministers and military people, all associated with early golf.

A letter written in 1812 by John Hutton, a former Provost of Dunfermline, reports that there were golfers playing regularly on the 'Links', still owned by the Shanks family at the time. The Council purchased this land from the Shanks' estate in 1886 to foster golf tourism. Later, in 1905, the Council purchased the 'Castlerig Lands' to the north, of which they retained 16 acres, which became holes 2, 3, 6, 7 and 8. So, the golfing area now being played goes back to Robert the Bruce and the Canmore kings and is one of the most historic and oldest in the world.

Kinghorn golf course hole 16 with Inchkeith island, the Forth and Edinburgh (right) in the background