Golf is first documented as having been played at Fraserburgh in 1613 when the Parish Kirk Session records refer to a young lad named John Burnett who was chastised for "playing at the gouff" on a Sunday instead of going to church.

On the said day appearing before the court John Burnet, son of James Burnet; Robert Farquhar, servant; John Fraser and James Troup lawfully standing hereto are held convicted of breaking the Sabbath by playing golf in the time of preaching. The said John Burnet is referred to the minister’s stool of repentance. The rest are ordained to suffer punishment from the magistrate”

The locus delicti is not known, but c1617 other offenders were “playing at the gouff” on the links on Sunday at Phingask which is in south-west Fraserburgh.

In the 1793 Statistical Account, there is also a reference to 'stone holes' under the entry for Fraserburgh Parish. These may have been marker stones for golf holes, which were certainly used by the Aberdeen Golf Club in 1780 in the layout of the their new course.

Recently the history of Fraserburgh Golf Club was 'extended' by over 100 years, when research to recreate the records lost in a fire produced new documentation showing a much earlier meeting of a golf club in the area. The original course was nine holes played on the "public commonty" (Fraserburgh Links), but from 1891 play has been at Philorth Links, which is a kilometre further south. 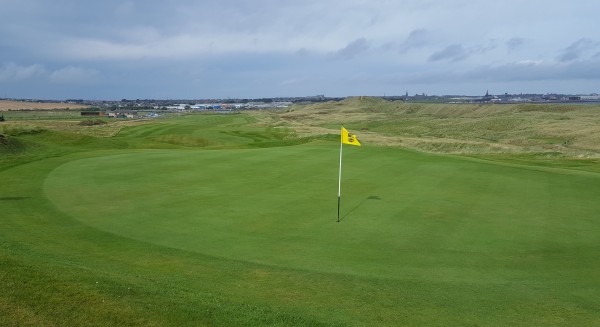