Golf is first recorded near Dunbar on 18th August 1616, when ‘Alex’r Jakson and William Aitcheson, yonger’ (sic) of the parish of Tyninghame, were brought to account for breaking the Sabbath (Sunday) by playing at 'nyneholis' (nine holes). This was an early form of golf found in references between 1573 and 1650. They were reprimanded by The Kirk (Church). There were other miscreants noted 1617, who were also rebuked for playing at 'ye golf'. 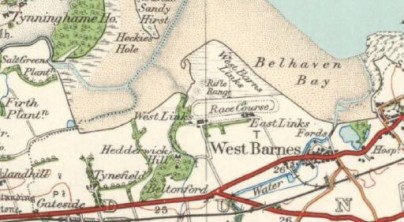 OS map of 1921 showing likely location of the West Barns Links golf course to the north of the racecourse. Another map from 1908 is shown here.  Map courtesy of National Library of Scotland.

The location of their illicit golf is not known for certain but is believed to be the West Barns Links, which were then accessible by the shore road, from the other side of the Tyne, no longer possible today.

In 1640, Rev Andrew Stevenson an assistant minister in the Episcopalian church in Dunbar was disgraced when ‘apprehended while playing at the gouff’  on Sunday.

A wood was planted over the area of the golf course in the 18th century, but the racecourse to the south is still mostly open space occupied by the East Links Family Park.

West Barns Links today, looking north with Bass Rock distant right. The golf course was where the wood is to the left.

In 1794, the first Dunbar Golfing Society began playing over the West Barns Links, which they called the Hedderwick Links. Golf waned at Dunbar in the early 19th century. The West Barns Links revived under the ownership of St Clair Cunningham and his widow Alice from 1890 to 1937 and had its own golf club, the West Barns Golf Club. It was the site of a world record golf score by James Braid of 57, reported in The Scotsman in 1912.

However, it was a private course and when the Town Council opened the Winterfield Links, on the other side of Bellhaven Bay, it made the west links no longer viable. This course still played, run on behalf of the Council by Winterfield Golf Club. 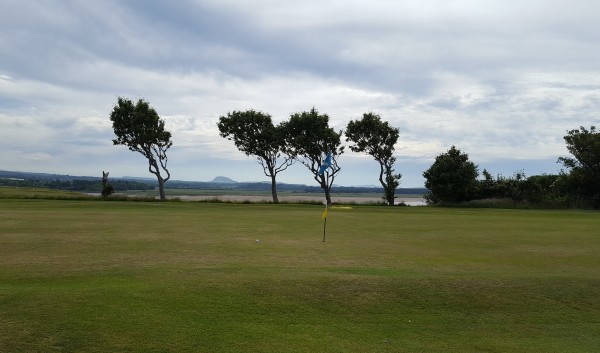 West Barns from the Winterfield Links over Bellhaven Bay

When the Dunbar Golf Club had been formally inaugurated in 1856, they negotiated playing rights over the East Links to the south of Dunbar, where they still play today.