The north of Scotland was more populous in days gone by, when Scotland was an agricultural society and people lived off the land.  There was probably more golf being played in the north than records suggest, even though the weather is not as benign as it is in Fife or East Lothian, especially in the winter. The highland clearances, the industrial revolution and urbanisation changed all that.

Landowners from the highlands went south to Edinburgh, not just for warmer city living, but also to deal with their children's education and legal affairs. From 1717, the St Andrews University term began on 20th October, so that 'gentlemen who had legal business in Edinburgh would be able to put their children to college beforehand'.

Throughout the 17th Century, there are mentions in Court records of golf in many places in the north of Scotland including Orkney, Banff, Elgin and Forres and Fraserburgh.

Early golf on Dornoch links is said to have started in 1616. Certainly in 1619, there is a record of £10 being spent for golfing equipment for the young Earl of Sutherland

His tutor and guardian was Sir Robert Gordon of Gordonstoun, winner of the Silver Arrow archery competition in 1617 at Holyroodhouse in Edinburgh. In 1628, he wrote the 'Genealogy of the Earls of Sutherland', in which he enthused that the links at Dornoch were

the fairest and lairgist links (or grein fields) of any part of Scotland and They do far surpasse the fields off Montrois or Saint andrews. 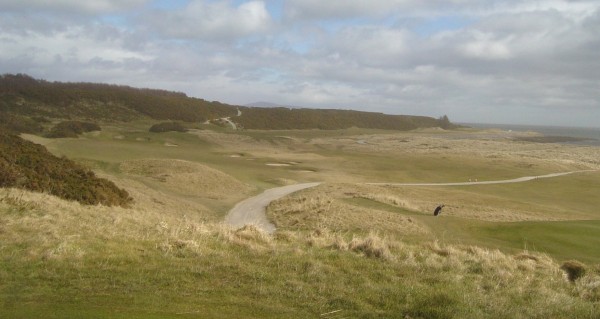 This seems to be the first recorded instance of a golf travel hyperbole.

The present golf course at Dornoch dates to 1877 when the Royal Dornoch Golf Club was founded with 9 holes. In 1886, Old Tom Morris laid out a more extensive course.

A famous son of Dornoch is Donald Ross who was born there in 1872 and served a year's apprenticeship with Old Tom Morris at St Andrews.  Later in 1899, Ross left Dornoch for America where he became one of the most successful golf course architects responsible for the design of 413 golf courses, including Pinehurst No 2 in North Carolina, Seminole in Florida and Oakland Hills outside Detroit. Over 100 US national championships have been played on his designs and he is honoured by the Donald Ross Society.

One of Royal Dornoch's most prominent early Captains was Andrew Carnegie, the renown philanthropist. He had retired to the north of Scotland in 1898 and bought Skibo Castle. He was a keen golfer, as was his wife Louise, but on his first visit to Dornoch, his lack of golf skill had somewhat let him down and he felt so humiliated that he went back to Skibo and built a 9-hole course to learn to play better.

Another regular golfer at Dornoch in the early 20th century was Joyce Wethered, whose father owned a holiday house that backed onto the links, near the second hole. Joyce and her brother, Roger, who would also become an amateur champion as she did, crossed the road and slipped over the wall onto the course.

Today, Royal Dornoch is one of the most highly rated courses in Scotland as is the nearby Carnegie Club course at Skibo Castle, which is open to visitors on a limited basis.