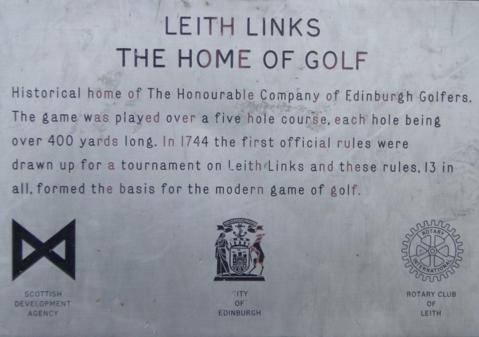 At one time or another there were dozens of golf clubs playing at Leith Links, notably the Honourable Company founded in 1744 and Leith Thistle founded 1815. They are all gone and now golf is no longer played there.

The first mention of golf in relation to Leith dates from a reported dispute in 1554 between 'the cordiners' (leather workers) of the Cannongate and the 'cordiners and gouff ball makers of North Leith', which means the use of stitched leather golf ball and links golf. This is only two years after the mention in the St Andrews charter. 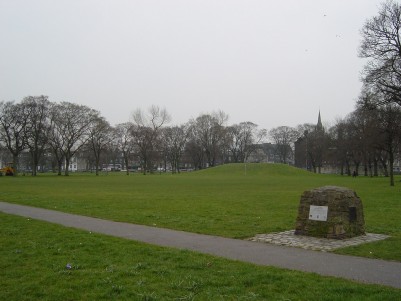 One traditional derivation of the term Fore! derives from the use of two defensive cannons of Leith fort. The embankment, seen in the picture to the left of the cairn, is allegedly one of two gun emplacements used by the attacking forces in 1560, when the Links were the scene of the Siege of Leith by the English.

Leith was the site of some of the first reported attacks and injuries in golf. In 1571, nine Leith golfers were attacked by brigands and fought back, though three were killed. On a later occasion, in 1690, Sir Robert Sibbald was crossing the Links when a young boy, who did not hear him approach, hit him on the backswing with his club. Sir Robert required medical attention, but the fate of the young boy, believed to be the son of a local publican called Taylor, is not recorded.

As elsewhere, Edinburgh Burgh records of 1593 bemoan the fact that Edinburgh churchgoers were playing golf in Leith instead of going to church. On 16th February 1610, South Leith Kirk Session proposed a fine of 20 shillings (one pound) to be paid 'to the poor' by anyone found playing golf (or bowls or archery) between sunrise and sunset on Sunday. Apart from the fine, they would also have to confess their sins in church. These 'persecutions' continued until 1724, which year marks the last official Kirk prosecution in Scotland for Sunday golfing, when the Leith innkeeper, John Dickson, was accused of giving 'victuals' (food and drink) to Sabbath golfers.

Charles I hears of Irish Rebellion in Edinburgh

Tradition has it that the Bishop of Galloway was playing golf on Leith Links in 1619 when he suffered a deadly premonition of two men attacking him. So he threw down his 'arma campestria' (golf clubs), took to his bed and died. Another much repeated story is that King Charles I was playing in Leith in 1641 when he heard about the Irish Rebellion. The Rules of Thistle Golf Club outline the facts of the matter, but this has not stopped myths and legends abounding, as depicted in the famous, much later, etching by Sir John Gilbert in 1875/6.  These Victorian tales must be interpreted carefully.

Sir John Foulis of Ravelston, who was Keeper of the Register of Sasines (legal title deeds) and who kept copious personal records, played golf in Leith in 1672. So too did the medical student Thomas Kincaid in the winter of 1687-8. Both record the return coach journey from Edinburgh to Leith as 10 shillings, which is about half a Scottish pound.  Edinburgh golfers were prepared to pay to play at Leith Links. 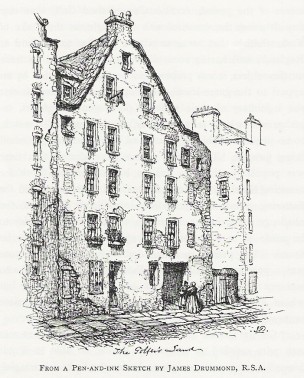 77 Canongate, Sketch from A Royal and Ancient Game by Robert Clark

More significant is the record of the first 'international' golf match in 1681, between Scotland and England on Leith Links. The Duke of York, who was the brother of the King Charles II and who would succeed him as James VII of Scotland / II of England, was then in residence as the King's Commissioner at Holyroodhouse. Two English nobleman of his circle claimed that golf was an English game. The Duke disagreed and challenged them to a golf match to settle the matter, choosing John Patersone as his playing partner. Patersone was a 'champion' golfer, by virtue of being a 'cordiner' and a golf ball maker. Not surprisingly, the Duke, who was a golf player himself, and his champion won for Scotland and it is said that Patersone bought a house at 77 Cannongate with the lion's share of the winning purse that the Duke generously split with him. The house was called 'Golfers Land', and the Duke had an escutcheon affixed to the outside with a heraldic design and the golfers' motto 'Far and Sure' inscribed on it. When John Patersone died, he also owned a house in Leith, from which he supplied golf equipment to the gentry. He had the unique privilege of being allowed to pay his 'feu of five merks Scots' (ground rent) in golf clubs for the Lord Provost. 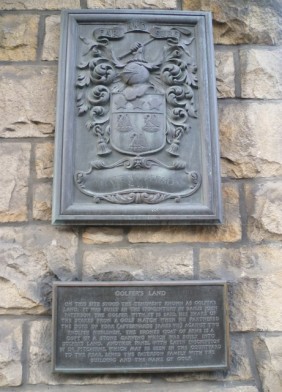 Cannongate is part of the Royal Mile in Edinburgh and Patersone's Golfers Land was demolished in 1960. It is now the site of a modern pub and remembered only by a plaque. It would rival any prize money today for a single golf game. The full story is reported in the Rules of Thistle Golf Club who report that the boy who carried the clubs of the Duke of York was Andrew Dickson, a future golf-ball maker, who thus became the world's first recorded caddy or forecaddy. It is not recorded whether Andrew Dickson got the caddie's usual percentage. In his old age, Andrew told the story to a young local historian, William Tytler, who later recorded it for posterity.

In 1724, 'a solemn match at golf', the first reported in a newspaper, took place on Leith Links, between the Honourable Alexander Elphinstone and Captain John Porteous of the City Guard for a stake of 20 guineas (22 pounds). Both men would be further reported in the press. Alexander Elphinstone fought a duel at Leith Links in 1729. Then in 1736, Captain Porteous gave his name to the Porteous Riots, when several Edinburgh citizens were accidently shot. He was lynched later by a mob who thought that the government were going to pardon him for his part these deaths.

Of course, the most famous single golf event on the Links was on 2nd April 1744; the occasion of the first golf competition anywhere in the world arranged by a group of golfers who were to become known as the Honourable Company of Edinburgh Golfers. This produced the first rules of golf and the first Captain of the Golf, Dr John Rattray.  In 1994, there was a 250th anniversary match, duly commemorated by the cairn on the links. 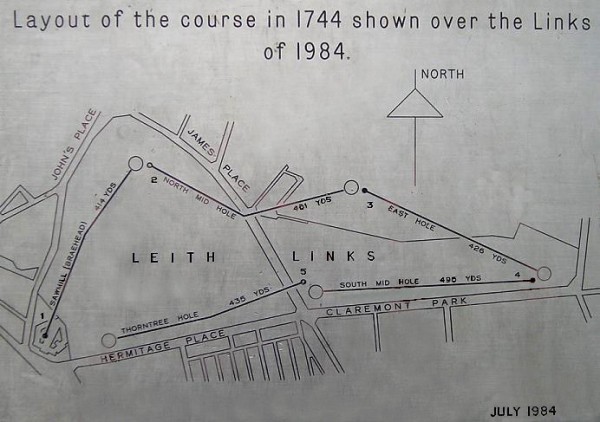 Another commemorative plaque on the cairn is an outline drawing, shown above, of the five holes used by 1744 on the course. The course begins in the bottom left and is played clockwise. Not shown is the 'practice' hole, played before the first round but not in subsequent rounds. We do not know when the first holes were laid out. There is a second cairn at the site of the second hole, to the north of the links in what was the grounds of the old White and Mackay bond store, now being redeveloped for housing.

To begin with the Leith golfers used local inns for hospitality. A particular favourite was Clephane's Inn in the Kirkgate (demolished in 20th century). In 1768, the Hon Company built a clubhouse called 'the Golf House', which they used along with the Thistle Golf Club, founded in 1815.  This clubhouse was sold in 1833 to pay debts. The Hon Company recommenced playing at Musselburgh in 1836, but the Thistle golf club were not so fortunate. They disappeared for thirty years and only recommenced paying at Leith c1869 using 8 Vanburgh Place as a club-house. The Thistle continued until the end of the century, when they effectively ceased to exist.

The Golf House building no longer exists. After it was was sold by the club it became a ordinary pub. It was beside the first tee, on the site of the building originally constructed for Leith Academy Secondary School, later used by Queen Margaret University and now converted into flats.

Until recently, the cairn above was the only commemorative marker for the start of golf proper. However, in 2019, a statue of John Rattray and three bronze plaques were erected on the north of the links near the bowling green. This was arranged by the Leith Rules Golf Society who also occasionally arrange for a course to be laid out on the links for hickory play.

Apart from this, there is not much to commemorate Scotland's national game in Edinburgh. The Museum of Scotland in Edinburgh has only nine artefacts of golf in one corner of one cabinet. They comprise 3 clubs, 4 medals, a box of gutta percha balls and a Thistle Golf Club cup.