The 'Granite City' has a golf tradition, which goes back much further than he foundation of its oldest club, Royal Aberdeen Golf Club in 1780. In 1538 and again in 1545, there are references to 'goiff' and 'goiff ballis' in Aberdeen City Records.

A few years later, in 1565, golf was on the list of 'unlawful amusements' proscribed by Aberdeen councillors. In 1613, John Allan, a bookbinder, with another John Allan, a cutler, was fined £3 on 13th April 1613 for "setting ane goiff ball in the kirk yeard and striking the same against the kirk". Both of these references may well have been to the 'target' version of golf rather than golf on the links.

The earliest reference in Scotland to golf holes is believed to be here in 1625, when a local Aberdeen record discusses some military exercises 'in the principal parts of the links betwixt the first hole and the Quenis (sic) hole.' 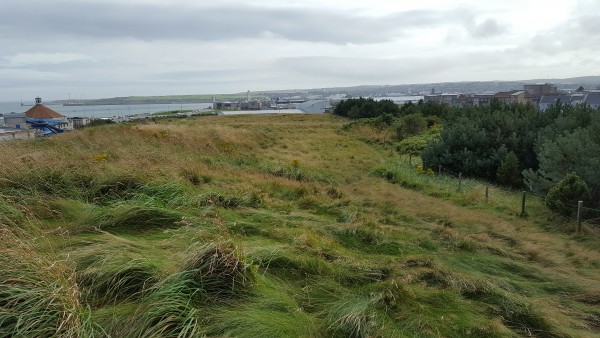 A few years later, in 1636, David Wedderburn, Master of Aberdeen Grammar School, published his 'Vocabula'. This was a Latin Grammar, using exemplars of golf to help teach Latin to small boys. The Golf section was titled 'Baculus'. Baculus, -i (m) was a stick, walking stick or augural staff. This supports, as least as far as Wedderburn believed, the derivation of the term Golf as meaning 'club'. Other terms, however odd the Latin vocabulary used, indicate all the trappings of the modern golf game: bunkers, golf balls, teaze (sic), the grip, the uphill lie, a bunker club and 'Good shot!' Most important here is the Caddy's advice and reference to the golf hole.

Aim straight for the hole!

Foramen, -inis, (n) is a hole, or opening produced by boring. All these terms must have been well known by this time to the small boys learning Latin. The two pieces of evidence together, makes it certain there were golf holes at Aberdeen by 1625.  Given the significance of the golf hole a key element of the game, this makes Aberdeen the un-acknowledged historical home of links golf.

From Queens Links to Kings Links

A few years later, a sole golf ball-maker called John Dickson was given a licence to ply his trade by Aberdeen town council, recorded on 11th May 1642 as a

licence and tolerance to John Dickson to use and exercise his trade of making gowff ballis within this burgh, in respect ther is not such ane tradisman in this burgh.

He probably came from Leith, where several generations of the Dickson family were golf club and ball makers. In particular there was a John Dickson who was described as a ball-maker and club-maker when he married Barbara Kennedy  (Kennedie) in 1637.

Play was initially on the Queen's Links and over the Broad Hill, recorded in 1661 as 'goffe' on the links between the Don and the Dee.  The Queen's Links has now been redeveloped, but the Kings Links to the north is still used for golf, in front of Aberdeen Pittodrie football ground.

Playing golf over the area of the modern Kings Links began in 1872. Part of the Kings Links still plays over the northern end of the 18 hole course laid out in 1876 and shown on the 1888 city plan below. 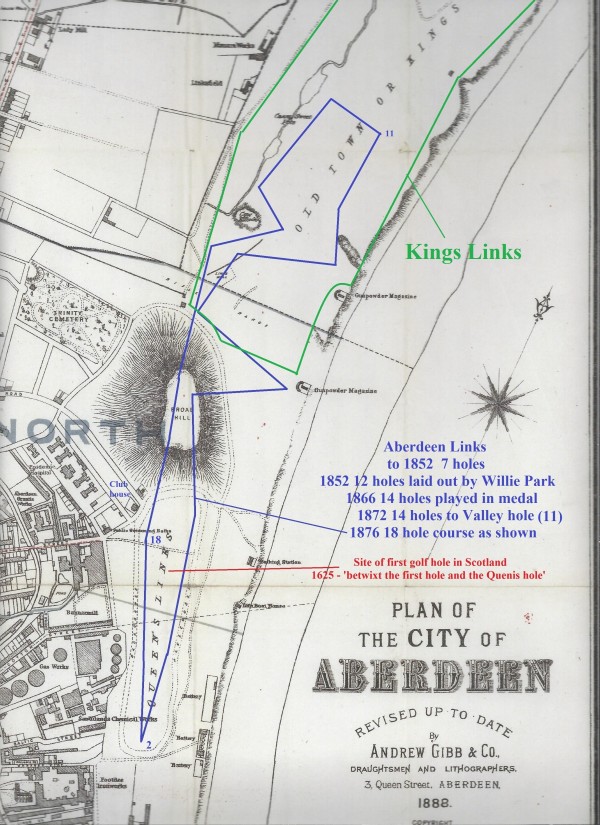 More details of the course development is given in 1876 Aberdeen Links.

The Royal Aberdeen Golf Club played initially on these links before moving in 1888 to Balgownie, shown further north at the Bridge of Don.

The Aberdeen Ladies Golf Club briefly played in Kings College grounds in 1892, on their formation, before negotiating the creation of a 9-hole course at Balgownie in 1893 from RAGC at a capital cost of £100. It was rent free (for as long as RAGC did not need the land) and on condition that they provided their own clubhouse, which they extended and still have to this day.

There are three clubs still playing over the Kings Links course. They are the Bon Accord founded 1872, Northern (1897) and Caledonian (1899) and they have clubhouses nearby, which they have recently agreed to merge.

The public Kings Links course is run by Sport Aberdeen on behalf of Aberdeen City Council. Information on other local attractions and accommodation are available on the Visit Scotland website.