There are more historic golf courses within walking distance of Gullane that there are at St Andrews. They have included at one time or another Gosford, Wanster, Kilspindie, Old Luffness, Luffness New, Gullane, Gullane 2, Gullane 3, Muirfield, Renaissance, Archerfield Estate, Archerfield Fidra and Archerfield Dirleton. Not all of these still exist. Gosford and Luffness Old have completely or largely disappeared. Wanster and Archerfield Estate courses have been replaced by Kilspindie and the recent Archerfield courses respectively, but the others are still largely as they were built. 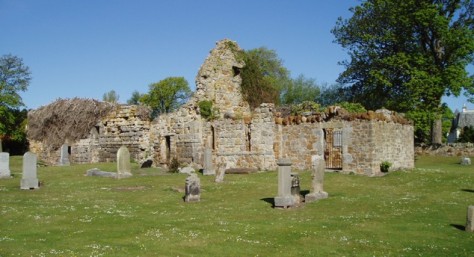 Gullane’s prominence was mainly due the presence of St Andrews Church, which lies in ruins just beside the professional’s shop. It was founded back in 1150, but more importantly it was an endowed church from 1450 which provided for a permanent college of priests, though the parish church transferred from Gullane to Dirleton in the reign of James VI.

Legend has it that as far back as 1650, the weavers of Dirleton played the weavers of Aberlady annually on Auld Handsel Monday. Dirleton is a village about a mile to the east of Gullane close to the Archerfield Estate and half way to North Berwick. Aberlady is a small town, slightly further to the west towards Edinburgh.

A ‘handsel’ is a gift given as a token of luck, usually at the New Year and auld means old. ‘Auld Handsel Monday’ was traditionally the first Monday after 12 January (a hang-over from the Gregorian calendar change in 1752) on which presents would be given to children or servants as well as a servants’ holiday for their work over Christmas. It has been now replaced with Boxing Day / New Year’s Day holidays.

The Rev John Kerr in his comprehensive book on golf in East Lothian, says that some Aberlady weavers, who had moved to Glasgow, walked back to Gullane by night to play in this gala competition. These annual holidays were more important then than now, as it was not until the end of 19th century that Saturday afternoon became a holiday and sporting activities on this day became common. The golf gala was discontinued in 1894 but revived in 1994 by the Aberlady Golf Club.

The first 7 holes at Gullane are recorded in 1840. They were where the present first and last holes of Gullane 1 are outside the Professional's shop seen in the picture below. Later this would be extended to 15 holes and finally in 1884 to 18 holes. More details are found in Gullane Links.

In the early 19th century, a group, mainly local farmers and the Edinburgh brewers, for whom they grew barley, formed a golf club known later as the East Lothian Golf Club. This club went into abeyance by 1848, but it was resuscitated in 1859 and still plays today at Gullane. Apart from playing Gullane Hill, as their rules required them to do, they are recorded as playing at Archerfield, North Berwick, Dunbar (Hedderwick Links) and New Luffness, over the next forty years.

In 1854, Dirleton Castle Golf Club was founded by the shopkeepers and workers of Dirleton and Gullane. This is the oldest golf club in continuous existence playing on Gullane links. They met at the Golf Tavern, which is the large white house beside the visitors’ car park, seen in the picture above and not to be confused with The Old Clubhouse, further into town.

In 1882, one of the Dirleton members would be the Rev John Kerr or Dirleton, author of The Golf Book of East Lothian (1896) mentioned above.

The Dirleton Castle golfers used the Tantallon golf rules in the early years, but in 1883 they got the opportunity to purchase 40 subsidised copies of the St Andrews Royal & Ancient Golf Club rules which were being supplied by the R&A at 6d (6 pennies) though they cost 9d (9 pennies) to produce, to encourage their use and promote the R&A.

Nearby, the golfers in Aberlady had been playing on the Wanster course on the shore, but they had been forced out by competition from the rifle range. They prevailed on Mr Henry Hope of Luffness, who owned an estate halfway between Gullane and Aberlady, to lay out a course on his land in 1867 which they used as the Luffness Golf Club. This course became 18 holes in 1872, but was partly on Gullane Common. Complications from this resulted in them being forced to leave it in 1898 to go back to the Wanster, which they developed into the present day Kilspindie course and club. Meantime, in 1894, Mr Hope employed Old Tom Morris to lay out a new Luffness course. It was called Luffness New, and this time the 18 holes were entirely on his own land. Part of it still plays over the 'Old Luffness' course.

For a few decades from 1869, there was a private course on the Archerfield Estate, played by the Archerfield Club made up of family, friends and suppliers to the Estate. This historic course had VIP visitors and players. It became 18 holes in 1887 and survived until the Second World War in 1940. The present courses at Archerfield are recent creations, but on the old site.

There was also a private course in Gosford Estate, where the Earl of Wemyss was a keen supporter. Legend claims James V, father of Mary Queen of Scots, played golf on the Wemyss estate.

In 1882, the Gullane Golf Club was created by local golfers to take charge of maintenance of the Gullane links, though not all the other clubs or golfers agreed to their requests for contributions, but they were supported by the owners of most of Gullane land, Mr and Mrs Hamilton Ogilvie. Over time they took the lead in developing Gullane’s courses and facilities.

In 1897, Gullane hosted the first Ladies British Amateur Championship to be played in Scotland. It was the first truly national women's championship and was won by a local girl, Miss Edith C Orr. 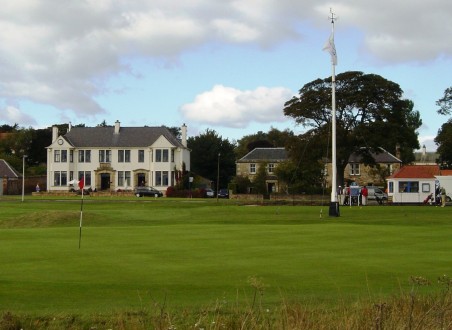 Gullane GC clubhouse, built on the site of the former Ladies clubhouse.

In 1889 a clubhouse was built in the village, which is today a public tavern, called ‘The Old Clubhouse,' beside the children’s course. The move doubtless prompted the redevelopment of the course and creation of Gullane 2 in 1898. In 1929, following acquisition of land surrounding the ladies old clubhouse, a new clubhouse was opened, and is the Members’ Clubhouse today and overlooks today's first tee, where the original first tee was.

A few years later still, in 1933, Gullane were given the opportunity to purchase the land on which the courses were built, which they did thus clarifying and securing the future of golf in Gullane. There is a private museum at Gullane run by Archie Baird, author of Golf on Gullane Hill, which is open only by arrangement.