The full story of Bruntsfield Links - Home of Club Golf has just been published.

The Accounts of the Lord High Treasurer of Scotland record several golf related expenditures for King James IV between 1502 and 1506. Some of these are clearly at Falkland Palace for play at St Andrews, but others have been associated with Stirling or Edinburgh. 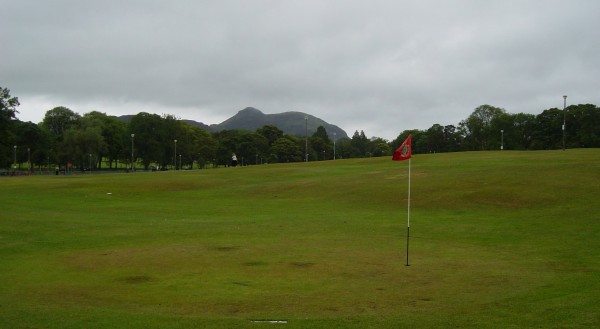 'the said aiker always being at ane distance from the place where the neighbours play at Goulf.'

A similar concession and restriction was made to John Hog in 1741 to quarry stone for the refurbishment of tenements at the Luckenbooths.

By 1711, golf was so popular on Bruntsfield Links that it was interfering with the quarrymen working on the links in summer, so the Council banned golf from 1st May to 1st August, except for children and boys under 15 years old. The penalty fine was half-a-crown (25p), which would at least £50 in today's money. At other times, the Council banned carts and other activities from interfering with the golfers in a vain attempt to please everybody.

The poet, Alan Ramsay, published 'Elegy on Maggy Johnston who died Anno 1711' which told of great number of people who mourned the passing of Maggy Johnston, keeper of a Houff (tavern) at Bruntsfield, with the well known rhyming couplet:-

Then Maggy Johnston's was our Houff;'

Maggy Johnston was married to James Scott of the City Guard and she died in June 1711. She was probably one of several home brewers based in the area.

Golfhall and the First Golf Societies 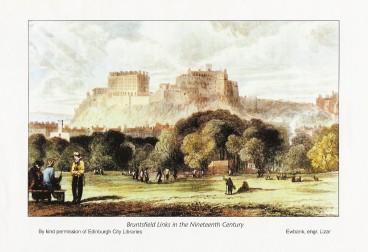 The first golf club-house, called Golfhall, was built in 1717 by a property developer called James Brownhill. The first publican was Robert Kello, a merchant who also had a shop on the Royal Mile. The second tenant was Robert Bigger, first known golfer at Bruntsfield and world's first golf club-master. The reason that we know he was there in 1723 is that we have on his grocery orders to a local seeds merchant. He left Golfhall c1728, after which the main tenants are important lawyers and the pub is not thought to have been in operation.

Though the pub may not have been in operation, golf club-making was. A recently discovered tenant at this time was George Neilson a golf-club maker, who trained his son, Robert Neilson, and James Dickson, from Leith. Both of them moved to Leith, where they became well-known golf-club makers in their own right. George Neilson also trained Thomas Comb, who stayed at Bruntsfield and took over from Neilson when he retired in 1760.

From 1760 to 1797, Golfhall was owned or tenanted to Thomas Comb, a golf-club maker, and the David and John Baptie and later Alexander Fraser, who were publicans.

From about 1735, members of group who would be known at the Royal Burgess Golfing Club were playing on Bruntsfield, but under what name is not certain. In 1761, or thereabouts, a splinter group, who became the Bruntsfield Links Golfing Society, began playing. Both clubs used Golfhall as a clubhouse, which may have been the catalyst for their formation.

Golf and the club-houses on Bruntsfield Links are seen in a painting by the artist Paul Sandy (1746/7), as well as a sketch by JMW Turner (1818), copies of which hang in the Bruntsfield Links GS clubhouse at Davidson's Mains.

Bruntsfield is the site of the first incontrovertible reference to women playing golf on a links. In 1738, the Caledonian Mercury newspaper in Edinburgh carried a report that two married women played an match, with their husbands acting as caddies. The event was won by the 'charming Sally', though, other than her first name, her identity is not known. Over subsequent weeks, other papers in London and America repeated the report, so it was obviously significant, even if subsequently forgotten. 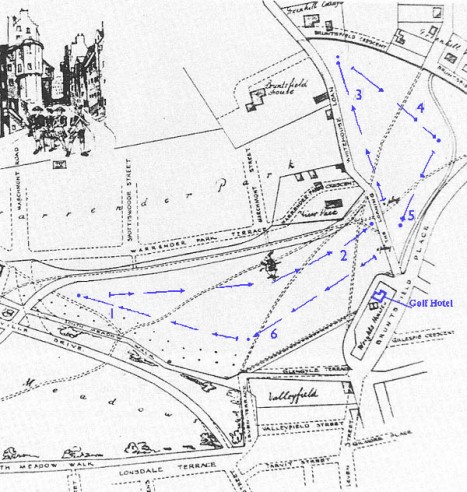 For many years, the course consisted of five holes. On 4th June 1818, the sixth hole, called the Union Hole, was inaugurated with a match between the Burgess and Bruntsfield Links clubs.

For a period, the Burgess rented a room in Captain Rollo's House, as Golfhall was too small. They returned when Golfhall was expanded and become known as the 'Golf House Tavern', and later still as the 'Golf Hotel'. It became 27-28 Wrights Houses when numbers were assigned to the street. There is both an etching and a photograph of it. The Burgess club used the 'Golf Hotel' until 1874, when they moved to Musselburgh. It is called the 'Golf Tavern' in the Burgess Chronicles, which causes some people to confuse it with the present day Golf Tavern, two doors along Wright's Houses.

The street name of Wright's Houses is derived from cottages which grew up round 'Wrytishous', a mansion on the other side of Bruntsfield Place. Wright's House was pulled down in 1800 and Golfhall / Golf House Tavern / Golf Hotel was demolished in the middle of the 20th century. 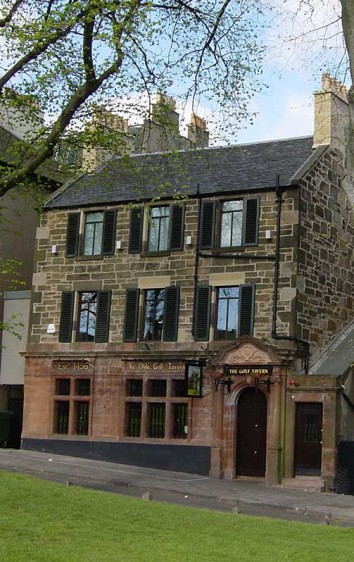 Different parts of the houses at 30/31 Wrights Houses were used as the clubhouse of the Bruntsfield Links golfing club from 1852 until 1894, even after the club formally moved to Musselburgh in 1876. The members occupied the first floor for six years and then the ground floor. More details of the tenants of Wright's Houses can be found here.

By the middle of the 19th century, there were at least a dozen clubs playing Bruntsfield Links. These included the Bruntsfield Allied (1856) and Edinburgh Thistle (1875), who used both the Golf House Tavern and the Golf Tavern as their clubhouses. Crowding was a serious issue and as a result of pressure from residents and golfers, Edinburgh City Council opened Braid Hills golf course on 29th May 1893, laid out by Bob Ferguson and Peter McEwan.

The premises of 30/31 Wright's Houses were remodeled as 'Ye Olde Golf Tavern' in 1898, though it has always been called The Golf Tavern. The Bruntsfield Short Hole Golf Club transferred from the Golf House Tavern to the Golf Tavern in 1904 and have been there ever since.

Bruntsfield Links now has a summer 36-hole short-hole golf course, established sometime before 1890.  Golf here is free to play. Clubs and balls can be hired from the Golf Tavern, continuing its clubhouse role. It is the longest serving, extant golf clubhouse in the world.